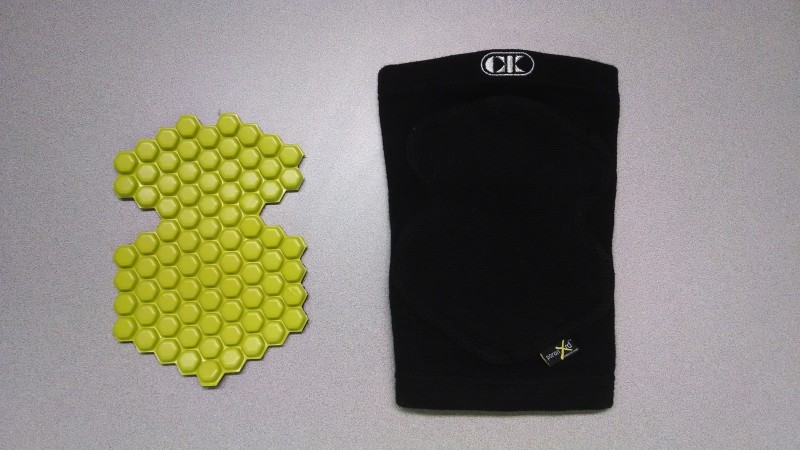 The PORON XRD Extreme Impact Protection foam on the left and the fabric kneepad made by Cliff Keen Athletic on the right.

I spent my time at this year’s Outdoor Retailer Winter Market in search of the best new products the outdoor industry had to offer. Generally, the setup of booths is relatively simple, with advertising dollars put toward building the most eye-catching display. But few things work better than a demonstration. That is what I saw when I visited the PORON XRD booth.

The shrill sound of breaking glass gained the attention of most people walking by, eventually growing into a small group gathered around to see what all the fuss was about. Dave Sherman from Rogers Corporation, which manufactures PORON XRD Extreme Impact Protection foam, was giving a demonstration of how the foam protects against injuries by being engineered for repeated impact and shock absorption.

“Impact has started to become a much more important story. You can’t read the newspaper or the sports page without there being some talk of concussions or injuries, so PORON is now used in things like top-rated concussion reduction helmets,” Sherman explained.

While the booth may have not been as tempting to visit as one with brand-new, bright apparel or energy food available for tasting, the purpose of the product is one that’s becoming increasingly more imperative in the outdoor world, especially with the rise of extreme sports. As someone who’s consistently writing about tragedies that result from action sports, I’ve come to understand how essential certain gear is.

I’m still confused by my friends who choose to snowboard without a helmet, especially after professional snowboarder Kevin Pearce’s story took over headlines and was eventually turned into a documentary. It showed how regardless of talent and experience, accidents still happen.

After the demonstration, I wanted to get more information about the foam. While Rogers Corporation dates back many years, the creation of the specific PORON XRD impact foam for uses other than footwear is relatively new. According to the website, “Soft and flexible to the touch, yet tough on impact—XRD Technology is a lightweight, thin and breathable. Designers of protective equipment and apparel, electronic cases, safety, footwear and other gear can now incorporate wearable impact protection that adds a visible technology advantage.”

I received a pair of kneepads that included the foam inside them, which I reviewed during a snowboard lesson this winter in New Hampshire. Simply put, I’m a horrible snowboarder. This was my first lesson and also the first time I’ve been on a board since I was 14. I’m now 23. Since many years had gone by, I assumed the majority of my lesson would be spent falling. I was correct in that assumption.

I spent the first half of the day using the kneepads, and the second half without, hoping to see a difference. Falling was still painful, especially since it was a repeated action, but I didn’t realize how much my knees were protected until I decided to go without the pads. I saw a huge difference. The pain from falling absolutely increased once I took them off. I don’t bruise easily, but my knees were becoming blue and swollen. Near the end of my day-long lesson (thanks to friends who are instructors), I put the kneepads back on. Again, I was basically re-injuring the same spot over and over again, but I could tell that my falls were cushioned once the pads were back on.

In the end, it was obvious I wouldn’t have been able to snowboard (read: fall) for the entire day if not for the kneepads. The fabric of the pads was made by Cliff Keen Athletic, and the foam, manufactured by Rogers Corporation, is PORON XRD Extreme Impact Protection. It can be easily slipped into the fabric for full knee protection. Rogers Corporation is starting to partner with other companies that produce apparel and helmets in order to begin installing the foam for increased protection. The XRD technology is now being used in helmets, gloves, as well as full bodysuits that would be ideal for cycling.

For more information and pricing, visit the PORON XRD website.