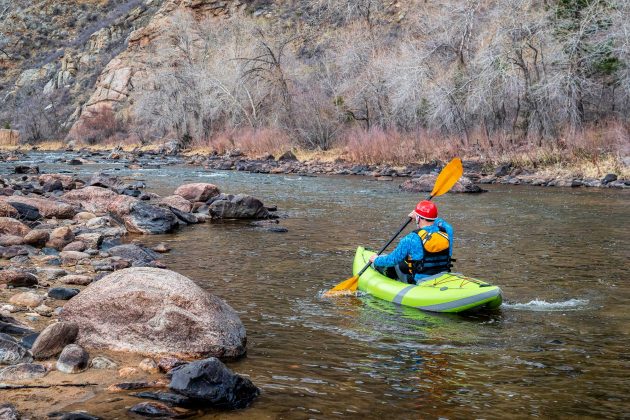 Kayaking is awesome. That may not be the most eloquent way to state it, but it’s the truth. In a very literal sense, kayaking is awe-some. As in, you’ll be in total awe as you paddle your yak around, getting into places you never could by car or even on foot.

In spite of their many benefits, kayaks do have one slight drawback: They’re bulky. That means storing and transporting them requires some extra thought and planning. Or does it? Inflatable kayaks solve those problems. And that’s all the more reason that we’ve wanted to help you sort through which are the best inflatable kayaks for you to take on your future adventures.

In case you’ve never seen one, an inflatable kayak is exactly what it sounds like: You inflate it before use, then deflate it when you’re done. It compresses and folds so you can store it virtually anywhere, like an air mattress. If you’re picturing a kayak made from pool float-esque material, think again — top rated inflatable kayaks are ultra-durable and rugged, typically made from reinforced PVC or high-denier nylon. It’s reasonable to wonder if inflatable kayaks can truly hold a candle to traditional ones, so let’s dive into that.

One of the biggest and most common barriers to purchasing a kayak is its sheer size. For people who live in smaller homes or have limited (or no) storage space, or those who don’t have a garage to safely store a kayak, owning a traditional one may be out of the question. Then there’s the issue of transporting a traditional yak, which most often involves investing in a specialty vehicle rack.

Even if you can overcome those hurdles, inflatable kayaks still have a number of advantages over hard-sided models. One of them is independence; the ability to pack your inflatable kayak into a backpack means you don’t have to rely on anyone else for help loading or unloading it.

Finally, it may seem counterintuitive, but top rated inflatable kayaks are actually better in the water than traditional ones in many situations. The “give” their soft-sided hulls have allows inflatable kayaks to navigate shallow water with precision. They can also essentially bounce right off of rocks and debris, then stabilize again quickly. This is especially true of the best inflatable kayaks for fishing and the best whitewater kayaks.

This top-rated inflatable kayak graces numerous “best of” lists, and for good reason — its hybrid, convertible design puts it squarely in a class of its own. The AdvancedFrame Convertible combines the versatility of an inflatable kayak with a rigid rib frame for handling that rivals any hard-shell yak. That rugged construction does have a trade-off: This kayak is 15 feet long and weighs a hefty 52 pounds.

The kayak makes up for its weight by being thoughtfully designed and highly convertible. It can be used solo or tandem, and zip-in Conversion Decks (sold separately) give you the choice of an open or closed deck, providing both protection and storage options. Advanced Elements included paddle holders, and the seats feature adjustable padded backs, making it one of the best inflatable kayaks for fishing.

Pros/Excellent steering and handling that mimic traditional yaks. It’s also spacious enough for long trips with plenty of storage space
Cons/This yak is heavy. It also doesn’t include any accessories, so you’ll have to buy a paddle and pump separately
Bottom Line/Because this kayak is so stable and handles so well, it’s excellent for beginners, but it also gives experienced paddlers a thrill
Check Price 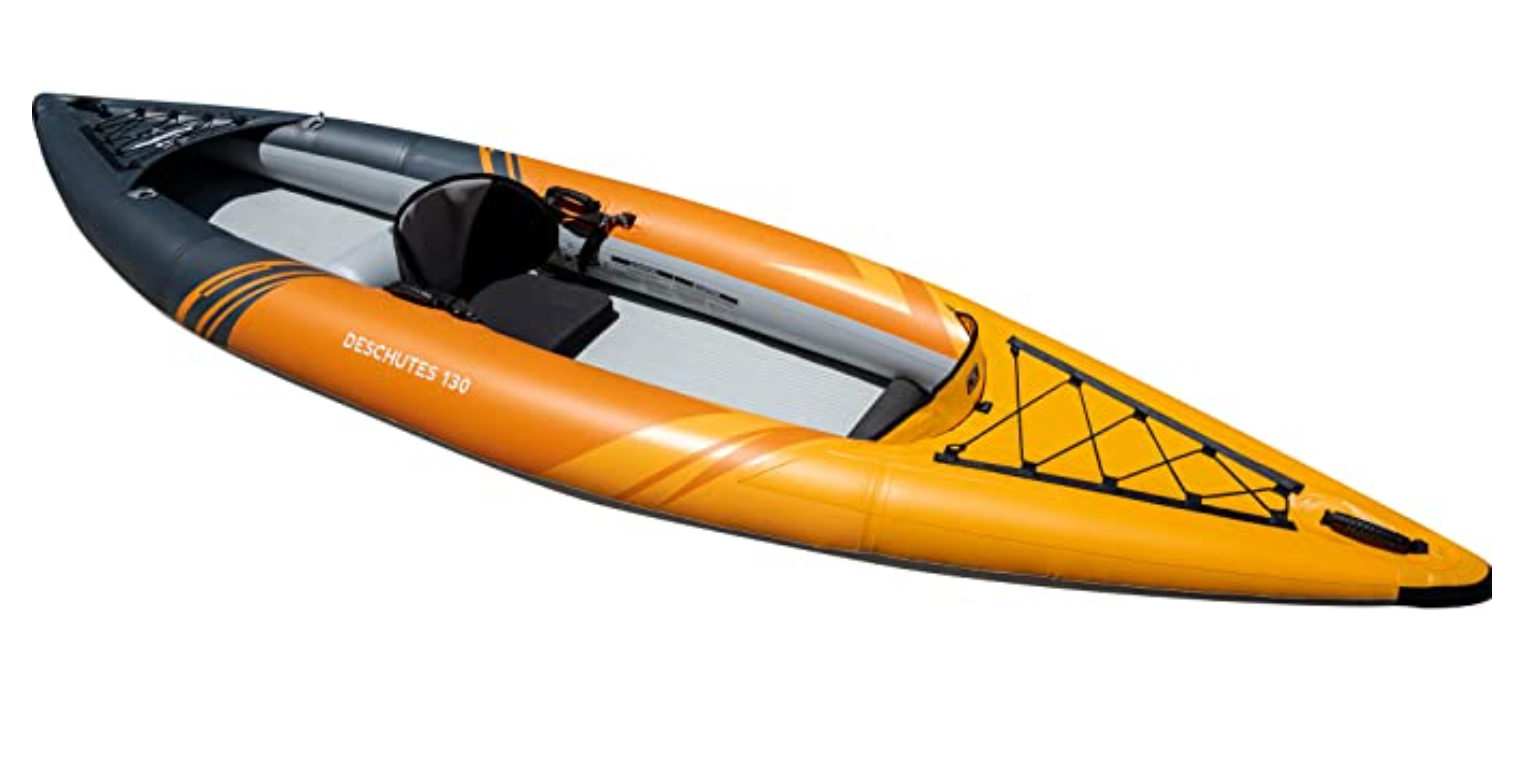 The Aquaglide Deschutes 130 is extremely lightweight — just 21 pounds. It’s also just shy of 13 feet long and 37.5 inches wide, and has sleek, streamlined hulls for optimal tracking and speed. Although not its intended purpose, this is one of the best inflatable kayaks for fishing because it’s exceptionally tough and rigid. In fact, you can stand up in the yak on the water despite it not having an inflatable floor at all!

Despite being “officially” a solo kayak, the Deschutes 130’s open cockpit and 400-pound weight capacity affords some flexibility. It’s not comfortable enough for two large adults, but it’s one of the top rated inflatable kayaks for bringing along a child or dog. While the seat isn’t adjustable, it is cushioned and has a surprising amount of back support. A bungee cord system on both decks provides dry bag storage.

Pros/Setup and breakdown is fast and painless, and it’s manageable for solo kayakers because of the low weight. We also love the backpack-style carrier
Cons/There isn’t a paddle or pump included, and the instructions are poorly written
Bottom Line/This is a straightforward, minimalist kayak that’s well-suited for longer touring expeditions
Check Price 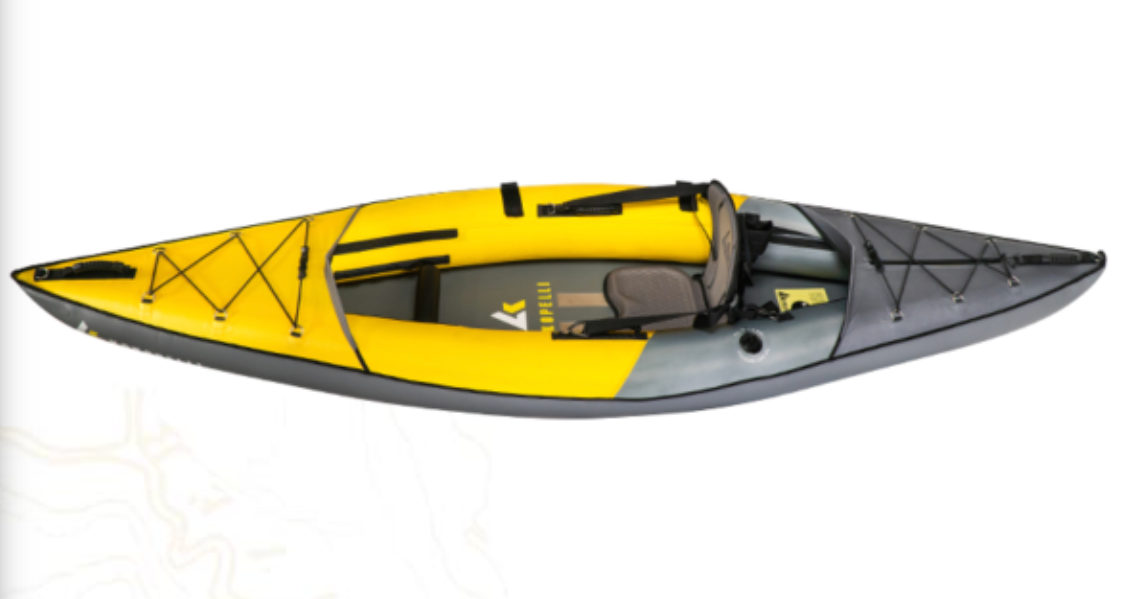 Kokopelli Packraft is the youngest company on our list — established in 2014, but don’t let that deter you. Its inflatable kayaks have made a big splash, the Moki line in particular. At 26 pounds and 10feet, 3 inches, the Moki-Lite is one of the lightest inflatable kayaks on our list. Yet, it’s surprisingly rugged and has a generous 400-pound weight limit. The kayak features an inflatable drop-stitch floor, 9-inch removable tracking fin, and adjustable foot brace.

Thanks to its streamlined shape, the Moki-Lite handles flat water, the ocean, and touring equally well and with respectable tracking and speed. The EVA seat is what really clinches a spot as one of the top rated inflatable kayaks. It’s not only exceptionally comfortable even on long trips, but it also includes multiple cleverly-designed storage compartments. The icing on the cake are the paddle holders and wheeled backpack, both pleasant surprises in a minimalist kayak.

Pros/Lightweight yet rugged, and it includes several unexpected bonuses such as the wheeled carrying case and adjustable footrest
Cons/The Moki-Lite doesn’t include a paddle
Bottom Line/Not our first choice for one of the best whitewater kayaks because of its compact size, but it’s our go-to for solo trips in open water
Check Price 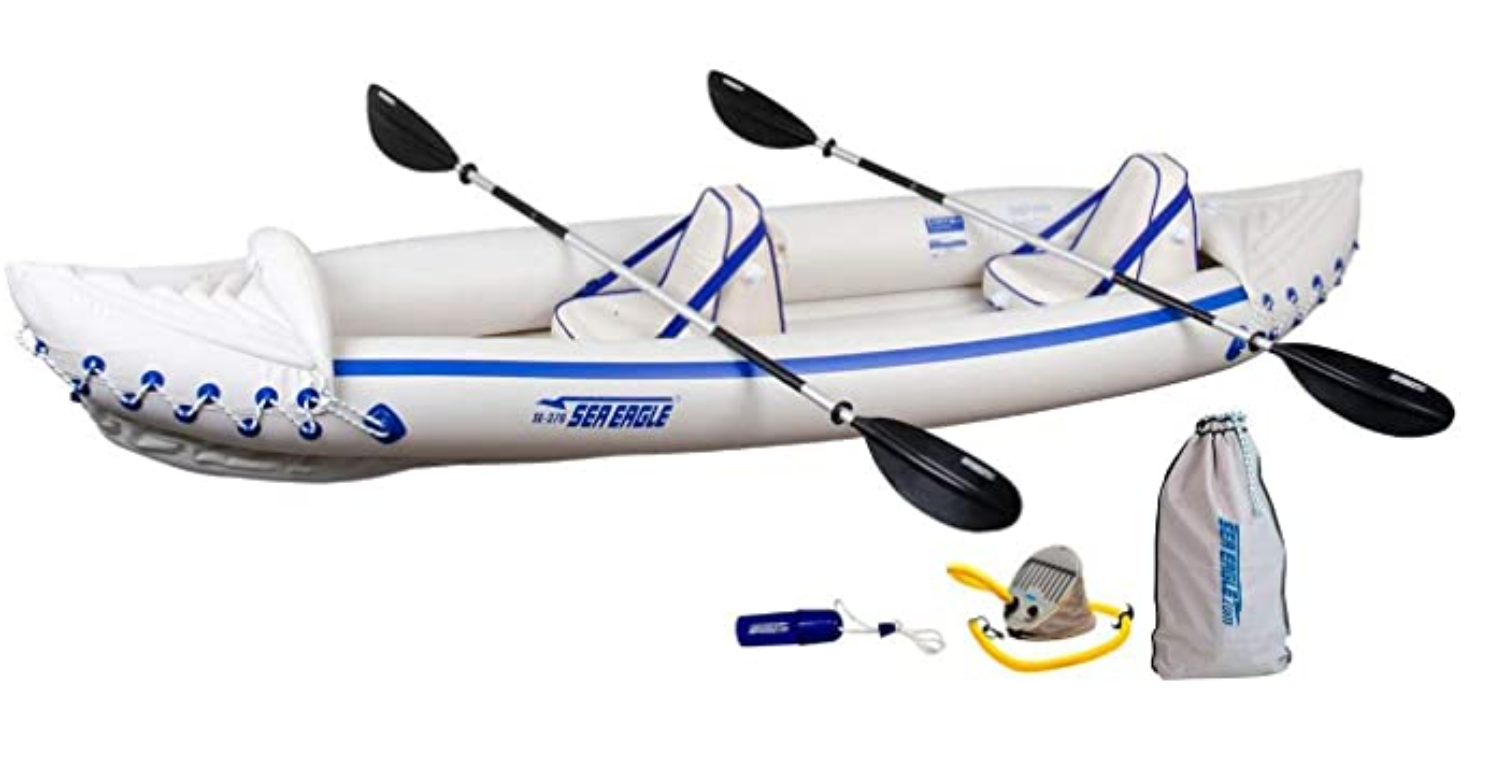 Sea Eagle has been making some of the best inflatable kayaks for whitewater since 1968 — the definition of tried-and-true. The Sea Eagle 370 Pro is rated for up to three people and can be used for one, although it’s best-suited as a tandem. It’s 12.5 feet long and 34 inches wide with a 650-pound weight limit, but weighs just 32 pounds. An open-design cockpit allows easy entry and exit, and two skegs on the bottom enhance tracking. The Sea Eagle 370 is rated for up to class III whitewater, and inflatable spray skirts keep water out of the cockpit.

Beyond the Pro, Sea Eagle offers the 370 in three packages: the base-model Deluxe, Sport Fishing and Quiksail. We recommend the Pro because for a nominal cost increase over the Deluxe, you get substantially better seats with excellent back support and storage bags on the seatbacks.

Pros/We love the versatility of using the 370 solo or tandem, plus the spacious cockpit allows you to bring extra gear
Cons/None. If we have to pick something, the paddles are four separate pieces, which feels slightly less-than-solid
Bottom Line/This is one of our top rated inflatable kayaks for its versatility and awesome price point
Check Price 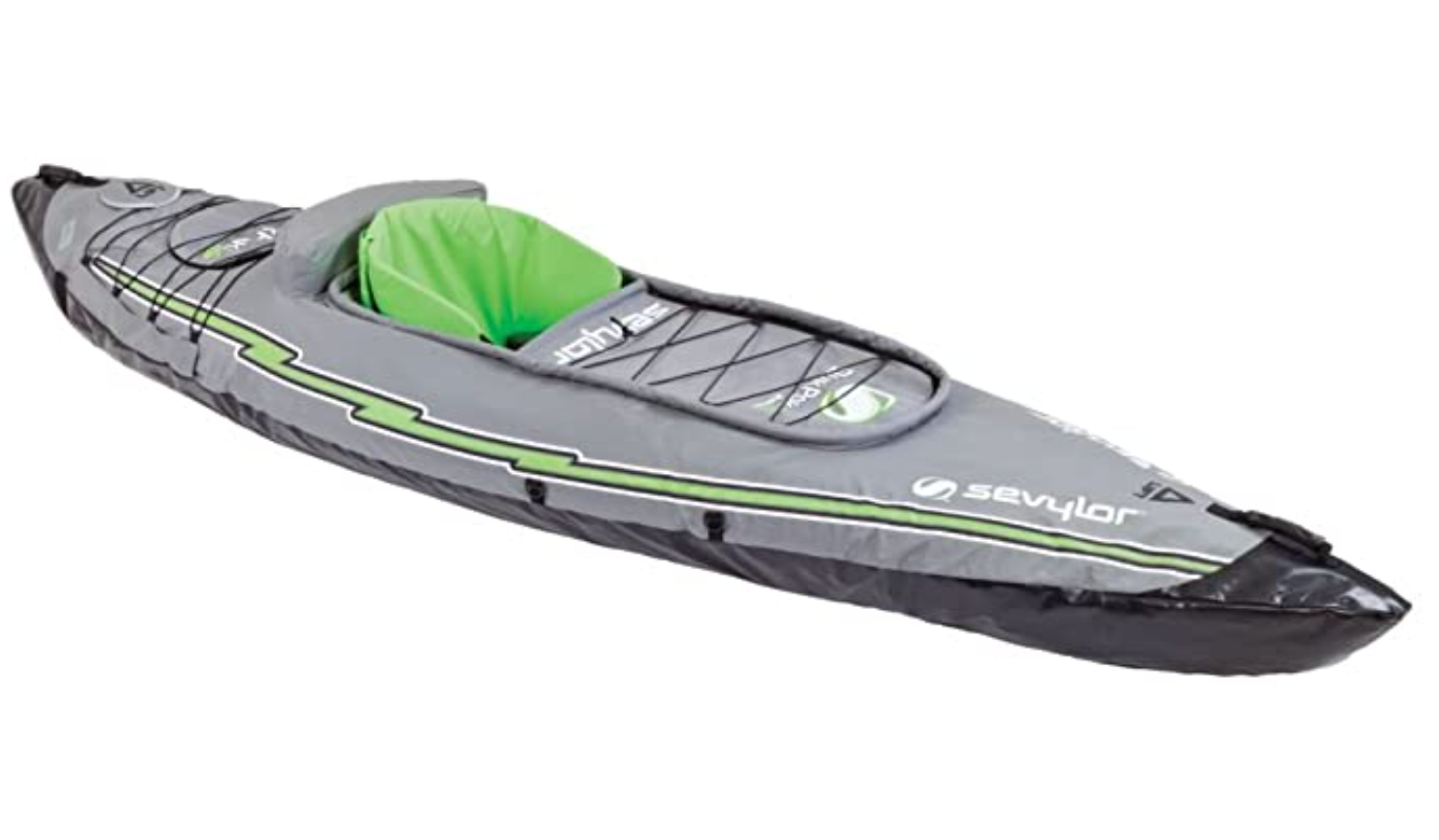 This innovative solo yak sets up in just five minutes — really. The most noteworthy feature of the 10-foot, 23-pound QuikPak K5 is that the backpack it comes in cleverly becomes the seat. Zip the backpack’s front panel in to create an optional spray skirt, which provides water and sun protection, and a place for a pup to lounge. The included paddle and pump fit into the backpack and even then, it weighs less than 30 pounds. It’s worth noting that on long excursions, you’ll feel the backpack’s straps and buckles under you.

Most inflatable kayaks have a lash-down system for storage, but the K5 takes that a step further with a zippered compartment in the stern. It curiously isn’t waterproof, but it is handy for stashing drinks. There’s even a built-in footrest, something you typically only see in higher-end inflatable kayaks.

Pros/You can’t beat the value or fast setup time. We also love the added storage
Cons/The included paddle is flimsy. The K5 also doesn’t have a self-bailing drain, so it takes awhile to dry
Bottom Line/It may not be among the best inflatable kayaks for whitewater or long distances, but it’s a solid choice for every other pursuit -- ideal if you frequent lakes or enjoy day-tripping
Check Price