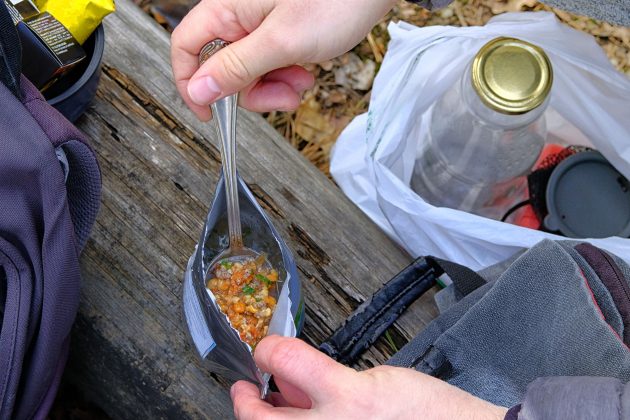 Everyone knows food simply tastes better in the backcountry. That’s just science. However, you don’t have to resign yourself to eating tasteless or flat-out cheap freeze dried backpacking meals.

On the contrary, backpacking meals have come a very, very long way in a relatively short period of time. Long gone are the unidentifiable globs of mashed potatoes and something pretending to be “beef chunks.”

Today, the best freeze dried backpacking meals resemble something Grandma would make for Sunday supper. That’s because “Grandma” likely did — many of the companies on this list are small family operations, born out of a desire for healthy but delicious backpacking food.

These healthy backpacking meals are tasty and generally require nothing more than water heated on your portable camp stove. But they also pack an essential nutritional punch, combining high fat and caloric density with low weight and little to no fillers.

Perhaps you’re an experienced thru-hiker or you hunt in the backcountry for several days at a time. Maybe you’re preparing for your first multi-day backpacking trip. Regardless, these creative backpacking meals offer some serious “food for thought.” 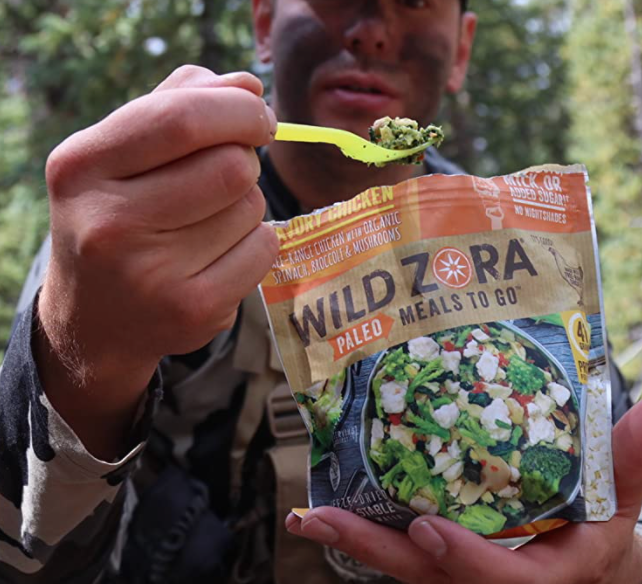 A growing number of people have food allergies, sensitivities, or other dietary concerns. It’s hard enough finding “safe” foods when you’re home, never mind on the trail. And foods that check those boxes and taste good? Forget it!

Wild Zora sought to change that with its freeze dried backpacking meals — and has, by all accounts, succeeded. Everything is paleo-friendly, meaning gluten-, dairy-, and sugar-free, and most items are also nut-, grain-, and soy-free. The company goes a step further and uses top-quality ingredients like free-range meat and organic veggies. Must-try: Mountain Beef Stew

Pros/Real food that actually tastes like, well, real food
Cons/Pricey. Meals start at $12.95, while bars are nearly $3 a serving. In their defense, healthy, allergen-friendly ingredients aren’t cheap
Bottom Line/Too expensive for every meal on a multi-day trip, but one of our favorite occasional creative backpacking meals
Check Price 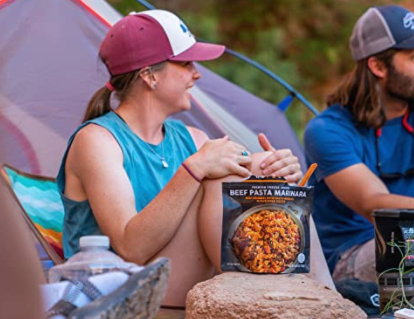 As the company name suggests, Peak Refuel meals are particularly high in protein, calories, and fat. In fact, with the exception of Three Bean Chili, all Peak Refuel entrees contain a minimum of 40 grams of protein. That’s about double what’s in most other healthy backpacking meals!

What’s not high in Peak Refuel’s meals is sodium. The company takes great pride in the fact that its meals have substantially less sodium than the competition. As a bonus, the lower sodium content means Peak Refuel meals require less water for cooking. That may seem like a relatively small detail, but using less cooking water means getting to carry less water. Must-try: Sweet Pork & Rice

Pros/Absolutely packed with protein, plus exceptionally high-quality, tasty ingredients including real meat
Cons/If we absolutely have to pick something, some of the flavors are lacking a bit of a “punch.” However, a dash of hot sauce remedies that
Bottom Line/Peak Refuel makes what we consider one of the very best MRE for backpacking
Check Price 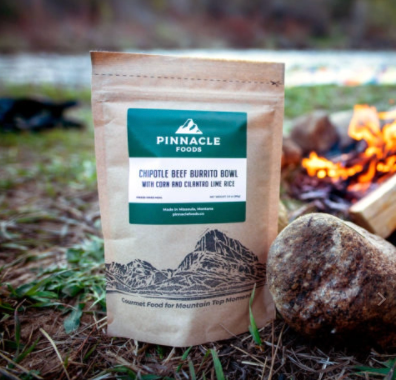 For as long as anyone remembers, even the very best freeze dried backpacking meals have come in bulky Mylar boil-in-bag packaging. Not anymore. Pinnacle Foods uses paper-and-corn-based omnidegradable bags, meaning you can safely burn them. That means no packing out used pouches! It gets even better: you can still cook directly inside Pinnacle Foods’ bags.

If the game-changing packaging isn’t enough to convince you, Pinnacle Foods also makes some of the best creative backpacking meals on the market. Owned by two brothers in Bozeman, Montana, this startup sells only made-from-scratch entrees and doesn’t use any preservatives or additives. Pinnacle Foods entrees also include about twice as much protein as bigger, commercially-produced brands. Must-try: Jalapeno-cheddar Biscuits and Herbed Sausage Gravy 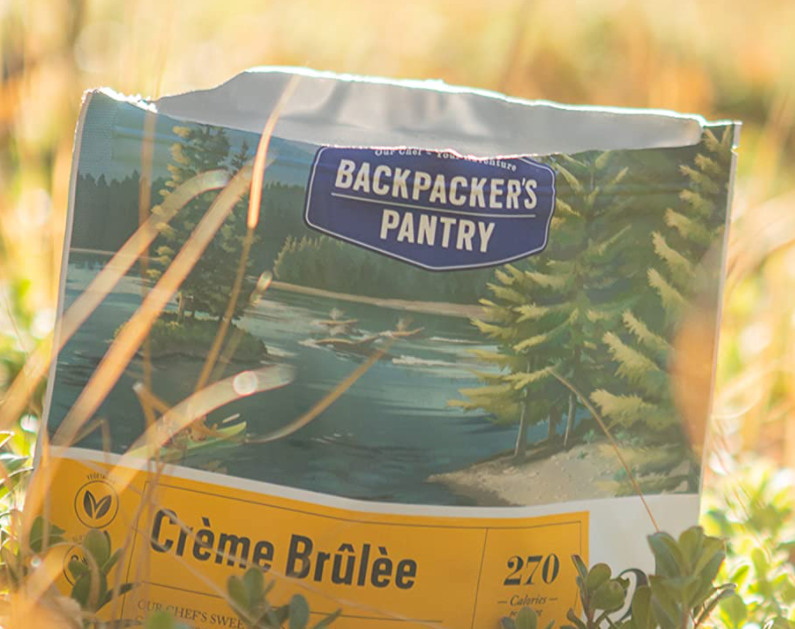 Backpacker’s Pantry is a powerhouse in the world of dehydrated and freeze dried backpacking meals. The company is known for tasty, innovative flavors, as well as its focus on natural ingredients. Many of the meals are organic, and all are MSG-free.

Another unique thing about Backpacker’s Pantry is that they offer a large selection of globally-inspired meals, particularly Asian and Indian foods. Everything you need to enhance the meal, including powdered condiments, is included. In addition, you’ll find vegan options, reduced-sodium meals, and snacks. Must-try: Louisiana Red Beans & Rice

Pros/Generous amounts of protein, plus an extensive selection of creative backpacking meals
Cons/Some meals are more expensive than competitors’ and they tend to be a bit saltier than other brands
Bottom Line/We recommend Backpacker’s Pantry because they’re priced right in the middle of the category and offer more flavors than anyone else
Check Price 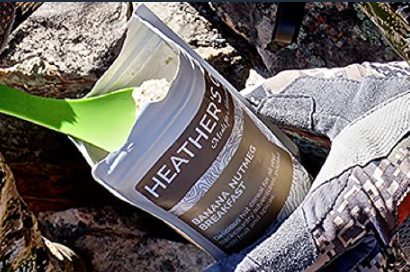 Like Wild Zora, all Heather’s Choice meals are paleo-friendly. Not only is everything gluten-, dairy-, and soy-free, but all ingredients are also responsibly sourced.

Heather’s Choice is one of the smallest companies on our list, and it started with owner Heather Kelly making meals in her own home dehydrator. She has reportedly never even tried a Mountain House product. That’s believable when you look at some of the company’s offerings, including Smoked Sockeye Salmon Chowder and Lemon-Lavender Packaroons. Must-try: Dark Chocolate Chili with Bison

Pros/Interesting meals that satisfy many dietary restrictions
Cons/Much more expensive than other options
Bottom Line/Heather’s Choice meals are well worth the occasional splurge, particularly if you follow a particular lifestyle diet
Check Price 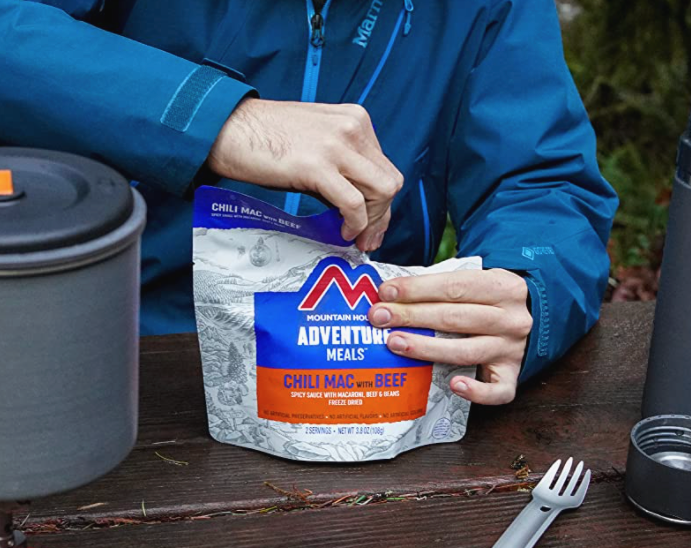 You knew it was coming: No list of the best freeze dried backpacking meals is complete without mentioning Mountain House. The company has been in the niche since the late 1960s, initially making meals for the military.

To that point, Mountain House meals are somewhat utilitarian. Their ingredient lists contain stabilizers and preservatives, like lots of salt. Portion sizes are also on the small side in comparison to other brands. Still, Mountain House makes cheap backpacking food that’s surprisingly flavorful, and the consistency is excellent. Must-try: Chili Mac with Beef

Pros/Affordable and a large selection of meals
Cons/Some varieties include lots of cheap “fillers” like rice and noodles, plus artificial preservatives
Bottom Line/Mountain House makes some of the best MRE for backpacking; just read the labels and choose your meals wisely
Check Price 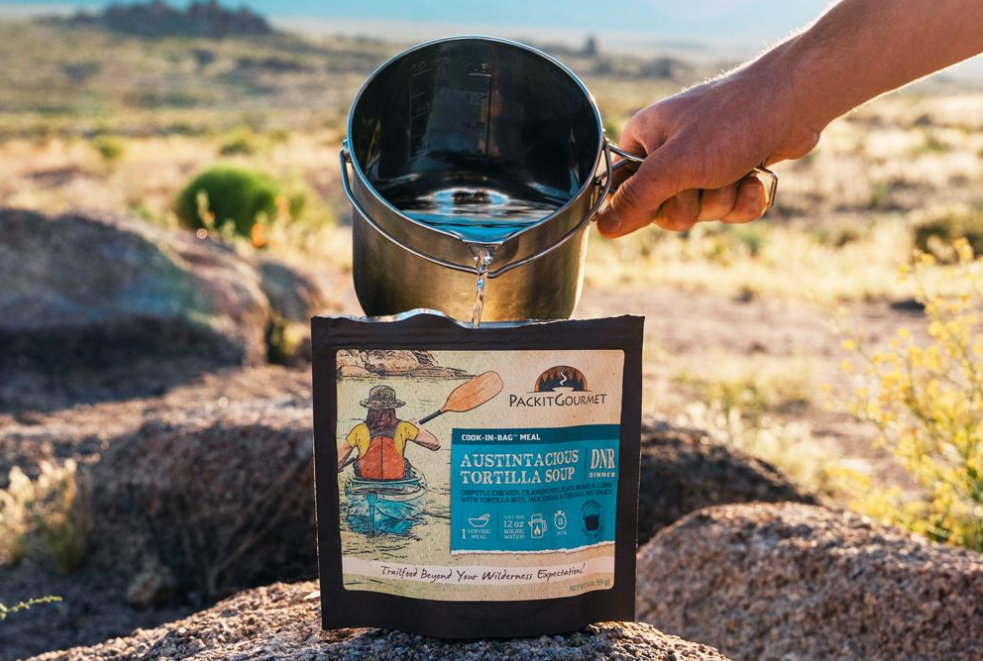 Like some of the other small companies making the best freeze dried backpacking meals, Packit Gourmet was born from the owners simply making food for their family. All meals feature ample amounts of protein, which is sometimes lacking in other brands. Packit Gourmet also includes thoughtful “extras,” such as hot sauce or malt vinegar, as well as fats, like cheese.

Pros/Huge variety of healthy backpacking meals (they even have “cool water entrees” that don’t require a stove!) at a good price point
Cons/The company uses ultra-lightweight packaging, which doesn’t retain heat as well as some others
Bottom Line/Packit Gourmet’s taste, variety, and thoughtful extras make it one of our top choices for the best dehydrated backpacking meals
Check Price 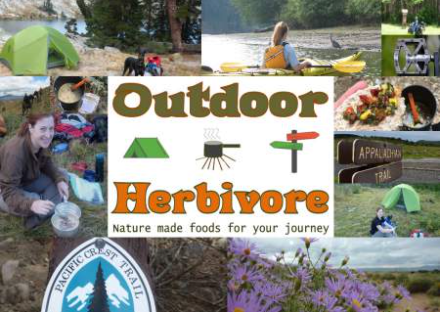 Not only does Outdoor Herbivore solely make vegetarian and vegan meals, but they’re legitimately some of the best freeze dried backpacking meals available. The company doesn’t use any artificial colors or flavors, and most ingredients are sourced from the Americas.

You may associate plant-based backpacking meals with being on the lighter side (admittedly, we did at first). However, Outdoor Herbivore cleverly adds caloric density to its meals by including ground beans or seeds, like chickpeas and flaxseed. All the entrees are incredibly well-seasoned also, which is rare among even the most creative backpacking meals. Must-try: Chickpea Sesame Zetti (also available gluten-free)

Pros/Genuinely delicious, hearty vegetarian and vegan meals at a totally reasonable pricepoint
Cons/Several meals require actually boiling food for a short time, as opposed to simply adding hot water and rehydrating. Pay close attention to cooking instructions on packages
Bottom Line/We like Outdoor Herbivore meals so much that we’d include them in our rotation even as committed carnivores
Check Price

Whether you’ve consumed more Mountain House stroganoff than you care to admit or you’re brand-new to the world of freeze dried backpacking meals, there are some things you should know.

● Test out meals beforehand. If possible, try your healthy backpacking meals a few weeks before your trip. Aim for at least a few days before. Of course you want to know if the taste is up to par, but more importantly, you need to make sure the meal doesn’t upset your digestive system. Trust us, you don’t want to deal with that on the trail!
● BYOC. Bring your own condiments, including packets of hot sauce, mayo and spices in snack-sized Ziploc bags. They add practically no weight and make a world of difference in enhancing your backpacking meals.
● Consider repackaging meals. Most freeze dried backpacking meals come in bulky Mylar packaging. Although it’s lightweight, it still takes up a substantial amount of valuable pack real estate. Use Ziploc bags if this is a concern.
● Bring an insulated bag. This acts like a mini oven, protecting your food as it rehydrates. Insulated bags are especially handy if it’s windy or extremely cold on the trail.