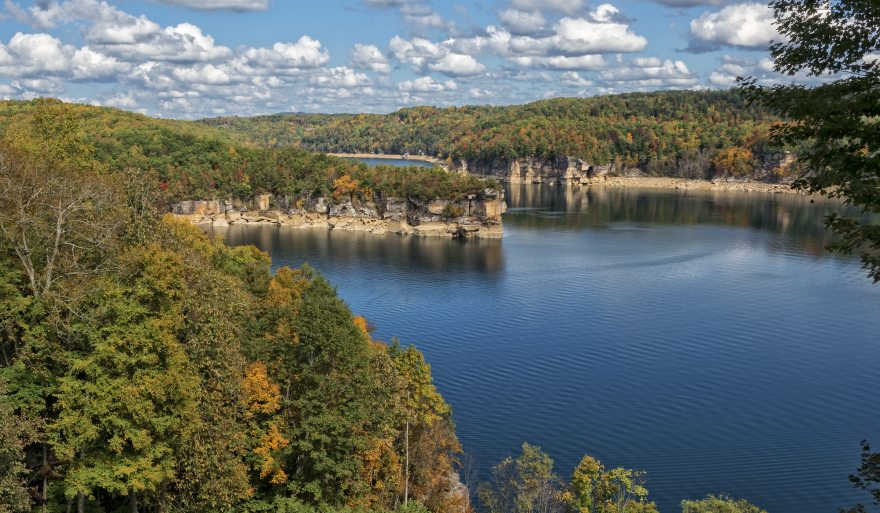 Typically, dams are named after the town it is closest to. Summersville Dam was created on top of a former farming village named Gad, but engineers (rightfully so) decided against naming it “Gad Dam,” so they went to the next-closest city, Summersville.

Although “Gad” is not in its name, you can still see parts of Gad’s roadways and foundations underneath the water.

Summersville Lake has become a West Virginia haven for camping but is very popular, so it is recommended that campers book ahead of time, especially during summer weekends and holidays, when it is most popular.

There are several campgrounds for Summersville Lake camping:

Summersville Lake campers can enjoy a wide range of outdoor activities, such as boating, fishing and even scuba diving.

For boating, there are public boat ramps available throughout the shoreline, making it easy to explore the lake and scenery.

The lake is filled with smallmouth and largemouth bass, trout, crappie, bluegill, walleye and channel catfish, so this is the perfect place for campers who are eager to fish. However, to fish, you need a West Virginia fishing license.

In addition, you don’t have to visit the Caribbean for amazing scuba diving. Surprisingly, Skin Diver magazine called Summersville Lake the “little Bahamas of the east” for its beautiful scuba diving, including up to 45 feet of visibility and warm waters. There is even a ship that was purposely sunk below the surface to provide more entertainment for divers.