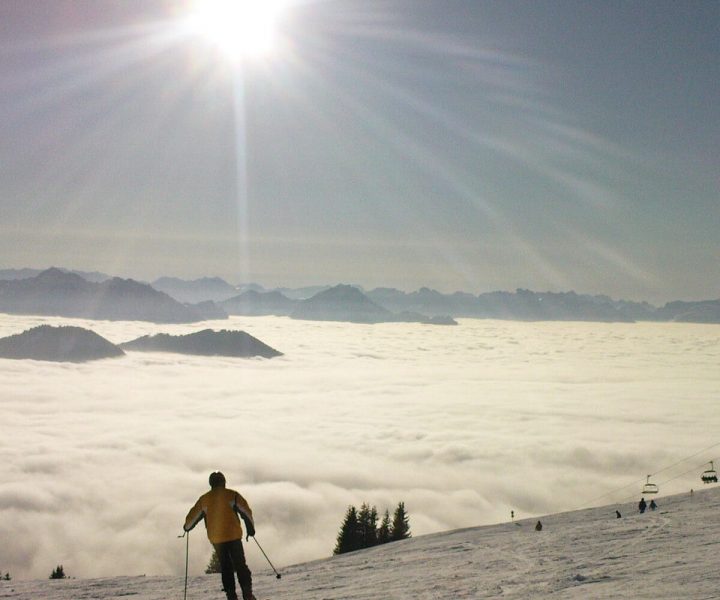 These ski runs may be some of the world’s most treacherous, but every true skier should attempt at least one of them before they die. There’s no better way of testing your skills than sliding down a mountain with ice patches, slick turns, and extremely high winds.

Push your limits, but always be aware of potential risks and be mindful and honest about your skills before attempting one of these runs. If you feel ready, indulge yourself with the adrenaline adventure of a lifetime!

Corbet’s Couloir has been called “America’s scariest ski slope,” and we’re guessing that’s down to the fact that it’s 10,450 feet high and a double-diamond ski run. Even the look of it is intimidating, yet it appears on most expert skiers’ bucket lists.

You can enter the run through two spots, and no matter which one you choose, you’ll face an immediate free-fall. The first entry will bring you perilously close to rocks after the 15 feet drop unless you make a sharp turn as soon as you land. The second entrance is more free of stones, but you are faced with a 20-foot drop. And once you hit the powder, prepare for speed, as the slope is 50 degrees.

Grand Couloir was once thought to be the steepest black-diamond run anywhere in the world, as it is ungroomed and undoubtedly scary. The most challenging part is said to be the route to the cable-car station, as it’s very icy and narrow. The entry is around 35 degrees, flattening out to 30 degrees with massive drops on either side, leading to even more harrowing couloirs.

The name is a giveaway – as Harakiri is the Japanese word for suicide by samurai. Austria is already known for the world’s steepest groomed slope and its challenging ski runs, so it should tell you something that Harakiri is the steepest in all of Austria, with an average incline of 78%. Should you fall, you likely won’t be able to stop until you reach the bottom of the slope.

When it comes to downhill skiing, there is no more spectacular race track than The Streif. Its diversity of terrain makes it so incredible, coupled with all the classic elements of a downhill course: dramatic bumps, compressions, curves, gliding sections, and high-speed breathtaking jumps.

Top notch skiers from all over the world compete yearly for the honor of being victorious on this ski run. Before and after the yearly race, anyone can tackle the racecourse during winter, albeit on the easier Family Streif.

The Olympiabakken is the longest slope in Norway, measuring at almost two miles long. It’s extremely steep in a lot of sections stretching over 2,600 feet in elevation with drops as high as 64%.

Therefore, it’s no surprise that this is also a Winter Olympic run, created for the 1994 Winter Olympics. If you want to know just how treacherous this ski run is, in 2008, Matthias Lanzinger, an Australian Skier, had to have his lower left leg amputated after he crashed on this course.

Unless you have at least one other person in your party, a shovel, a probe, and an avalanche receiver, don’t expect to get in through the backcountry gate entrance to Delirium. If you manage to get in, expect a fifty-degree pitch no matter your preferred drop point. To get to some of the best stuff, you will most likely need to hike the ridgeline, which is not recommended if you suffer from vertigo, as there are sheer drops on both sides.