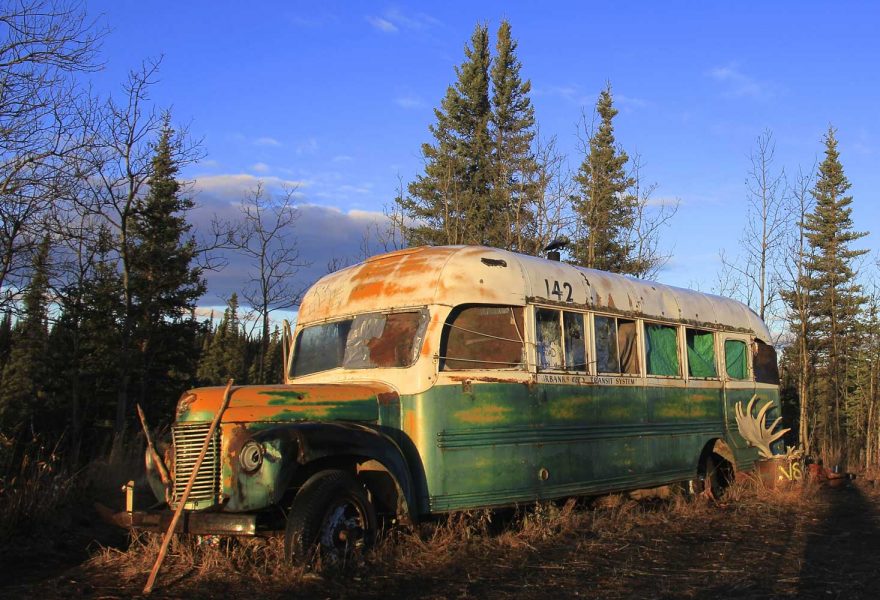 A lonely bus sits in the remote Alaskan wilderness, with the faint words ‘Fairbanks City Transit System’ on its side. This is the place where, in 1992, young hiker Chris McCandless lost his life. A story told in the film “Into the Wild.”

The movie “Into the Wild” depicts his fateful journey. Directed by Sean Penn and starring Emile Hirsch, it was made ten years ago, but for some, it remains a source of inspiration on how to go off the grid and follow non-conformist dreams. For wanderers and travelers, the bus has become a pilgrimage site. Unfortunately, some have fallen to the same fate as McCandless.

The legacy of Chris McCandless

The life and death of the 24-year-old first became well-known when John Krakauer published his book ‘Into the Wild’ in 1996. McCandless quickly became a heroicized figure for anti-establishment and adventure.

Soon after graduating university, McCandless left society behind. He donated his life savings to charity and started his adventure. He then went by the nickname Alexander Supertramp, and hitchhiked his way through the U.S. for two years, ultimately ending up in the Alaskan wilderness.

It was there that McCandless met his death, huddled inside the abandoned bus. His body was discovered by moose hunters just a week after he passed. His cause of death has never been officially determined, but it’s believed that he died due to potential seed poisoning coupled with malnutrition.

It seems ironic, but the popularisation of McCandless and his story has led to an increased number of hikers following the Stampede Trail to the No. 142 “Into the Wild” bus. Local news feature a barrage of stories each summer about hikers needing rescue due to unpreparedness.

Just last year, two hikers were rescued by a helicopter along with a 20-man party, after they lost their way on the trail. And they’re not the minority, reports state that around 75% of all rescues in the area occur on the Stampede Trail. Unfortunately, the pilgrimage turns deadly for some, like Swiss tourist Claire Ackerman, who drowned while attempting to cross a river to reach the bus.

Local lodge owner Jon Nierenberg has seen the pilgrims stay for days or even weeks on the grounds near bus No.142. He told The Guardian newspaper “…for the most passionate–the ones we locals call pilgrims–it is a quasi-religious thing. They idealize McCandless. Some of the stuff they write in the journals [at the bus] is hair-raising.”

The Stampede Trail, on the rim of Denali National Park, is not a trek that should be attempted by beginners. It’s not an easy hike, even for experienced hikers. Remoteness, the fast-flow of the Savage River, and rough terrain make it a dangerous and difficult trek.

It’s not a place to go unprepared, but these wanderers do exactly that. A state trooper told Outside Online “It’s some kind of internal thing within them that makes them go to that bus. I don’t know what it is. What would possess a person to follow in the tracks of someone who died because he was so unprepared?”

We’ve all heard the call of the wild, urging us to explore remote places and visit far-flung destinations. You can be inspired by nature and the spirit of adventure, but that doesn’t mean that we should follow in McCandless footsteps, as we only know of his story due to its untimely end.