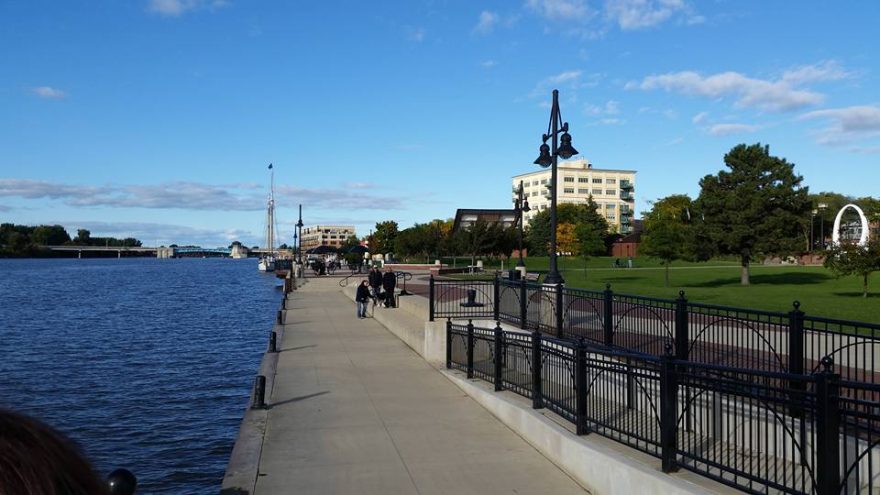 Michigan’s public trail system extends across the state like a web, running through lush forests, beautiful wetlands and acres of fertile agricultural regions. Not to be outdone, however, are the miles of pedestrian and bicycle paths that wind through some of the state’s most beautiful riverside cityscapes.

Ideal for an evening stroll or a Sunday afternoon bike ride, each city’s riverwalk entwines the area’s natural beauty with its own brand of culture, art and entertainment. Here are 5 urban riverwalks that will appeal to any visitor.

Among the more famous—and beautiful—of Michigan’s urban riverwalks is the section of the Bridge to Bay Trail that passes through Port Huron. It begins where Lake Huron’s azure waters flow into the St. Clair River and under the majestic Blue Water Bridge. In fact, the bridge itself is a manmade wonder that every visitor to the area should see close up.

The 3¾-mile asphalt walk runs from just north of the bridge, along the river’s west bank, through downtown Port Huron with its many shops and restaurants, and across the Black River Drawbridge, where then it connects to the beautiful Blue Water Riverwalk. This section follows a shoreline that was once an industrial zone dedicated to shipping, but is now reclaimed and restored to its natural state by a joint effort of non-profit, private and governmental organizations.

Along the way, visitors can also enjoy the many attractions the area offers, such as the Huron Lightship Museum, the last lightship to serve on the Great Lakes, or the Great Lakes Maritime Center, a perfect spot from which to view sailboats, pleasure boats—even ocean-going freighters—as they move up and down the waterway.

The western Michigan city of Grand Rapids is known for its deep roots in arts and entertainment, its excellent restaurants and its many craft breweries, among other things. One of which is the Grand Rapids Edges Trail that skirts both banks of the Grand River, and is linked by several bridges and pedestrian walkways.

The downtown loop, from Fulton Street to the historic 6th Street Bridge crosses the rapids for which the city was named. And the bridge itself is the oldest remaining metal bridge in the state.

Miles of pavement and asphalt in the Motor City follow the Detroit River from Joe Louis Arena to the Gabriel Richard Park. Along the way visitors can dine at one of any number of outstanding eateries; relax in one of the many plazas and parks, or simply take in the sights.

The walk’s lower end, for example, offers a view of the spectacular Ambassador Bridge, linking Detroit to Windsor, Ontario, while roughly at the midway point Milliken State Park features a 63-foot lighthouse, a replica of the recently renovated Tawas Point Lighthouse, which was built in 1876.

Detroit’s riverfront is the perfect place for a leisurely after-dinner stroll, or the spot to fill an evening (or weekend) with fun and excitement at any of the dozens of events that take place throughout the year.

Part of the Bay County Riverwalk & Trail System, the nearly 10-mile Bay City Loop which includes a long stretch running along the Saginaw River, once home to thriving shipping and ship building industries.

The city itself has a place in history as a rough-and-tumble town that drew sailors and lumbermen alike to the gambling houses and bars along a stretch that was known far-and-wide as Hell’s Half Mile. Today, the same section along Water St. is home to the prestigious Hell’s Half Mile Film & Music Festival, and riverwalk visitors taking in the city’s rich maritime history as they stroll through Veteran’s Memorial Park might just see a tall ship schooner slipping down the waterway as it heads for Lake Huron’s Saginaw Bay.

Nestled on the Lake Michigan shoreline, at the tip of the Big Mitten’s pinky finger, the city of Manistee is a popular vacation destination for hikers, bikers, anglers, beachgoers, golfers, cross-country skiers and more.

In addition, the get-away city features several art galleries, historic theaters, shopping and fine dining, as well as one of the most picturesque riverwalks in the state. It follows both banks of the beautiful Manistee River as it passes through the downtown area, with the 1½-mile South Walk being the longer of the two. It runs from the US-31 bridge all the way to Lake Michigan on the west end, and offers benches and fishing piers for those who want to pause to soak in the outdoor atmosphere. Short stairways provide easy access to shops and restaurants along the way.