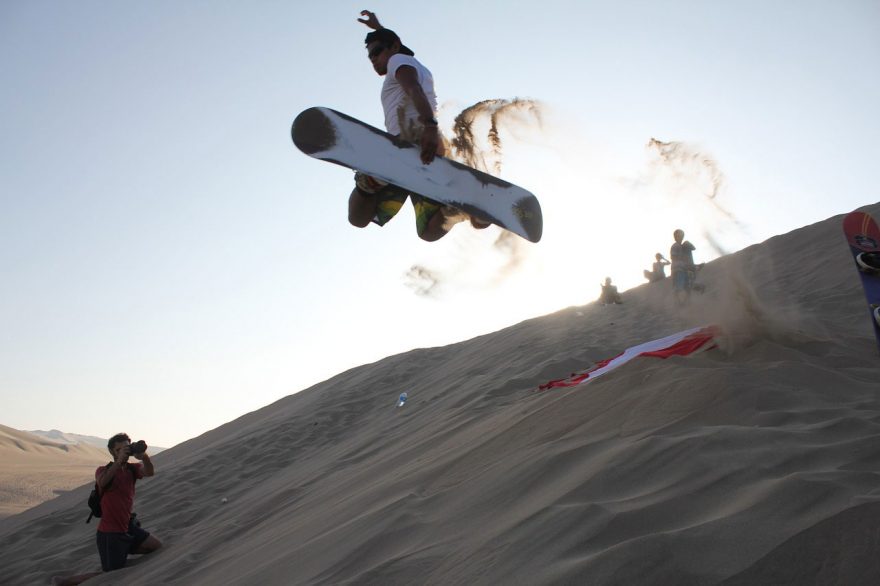 Swap the balaclavas for bikinis and the snow for sand. Sandboarding is often thought of as the warmer, more bearable version of snowboarding. However, they do come with their differences and this is why it deserves its own introduction.

Sandboarding (or also known as sand sledding) can be enjoyed with two main variations. The first method is highly similar to snowboarding, in which you are strapped to the board as you head downhill. The other variation is not too dissimilar to sledding, lying on your stomach on a board or piece of wood. Today, though, we’ll be primarily introducing you to the first variation.

Of course, it could be argued that the origin of sandboarding derived from the practicality of transport, rather than first being a sport. Some believe that this served as inspiration for the birth of snowboarding, and originated in ancient Egypt. It is thought that the Pharaohs slid down the dunes on wood or clay.

Another popular belief is that it originated in Santa Catarina, Brazil. The argument for Brazil being the birthplace of sandboarding is that the locals would use it as an alternative to surfing if there were low, or no tidal waves.

There are several other theories flying around, however, it is difficult to pinpoint one original source. Whichever you choose to believe, it seems clear that sandboarding would likely be an instinctive way to transport yourself down a dune, be it for fun or practicality.

The sandboard is made specifically for riding down dunes. The base is much harder than the base of a snowboard and is designed so that it effortlessly glides over the sand. Most often, the board is made out of wood, fiberglass or plastic and the bottom is waxed so that it doesn’t grip to the sand.

You can use a snowboard; however, it is unlikely to work well unless the dune is particularly steep. You’ll find that it will stick to the sand too much and you’ll either not move or not rack up enough speed.

If you’ve ever done a sport which requires you to stand on a board sideways (skateboarding, wakeboarding, snowboarding etc.) then you’ll probably adapt to sandboarding much quicker. If you’re relatively new to these kinds of sports, then you will have to take some extra time to find your balance properly. Sandboarding is a great board sport for beginners and is generally thought of as one of the easiest ones to pick up. Plus, if all else fails then you can lie on your board and slide down the dune!

The sport is hugely popular among the youth because of how easy it is to take part. There is very little equipment you need and it is also relatively inexpensive in comparison to the likes of snowboarding.

You don’t need much in the way of protective gear because sand is incredibly soft to fall on. So, even if you fall hard, you will most likely bounce back up with a smile on your face (even if it is full of sand).

The popularity of the sport is growing and competitions take place all over the world now, some with great cash prizes sponsored by companies such as Red Bull.

Where to Sandboard in North America

Really, you can sandboard anywhere you can find a suitable dune, which is one of the great things about the sport. You don’t necessarily have to travel to the closest desert; sandboarding can happen along many coastal regions.

This claims to be the world’s first sandboarding park and is situated in the city of Florence, Oregon. The park is 40 acres and depending on your age and ability level, you can hit the beginner or more advanced slopes. This facility is great if you’re accompanying a sand border but don’t like taking part. You can join a sand sculpting class, rent a bike or try out their sand dune buggies.

This is a popular spot for sand boarders and sand sledders alike. Here you’ll find a variety of slopes, catering for a mix of ability levels. Although, it is recommended that you know your limit because it can be difficult to stop on some of the higher dunes.

The NPS doesn’t rent sandboards here, however, there are two rental services in the San Luis Valley: Kristi Mountain Sports in Alamosa and Oasis Store.