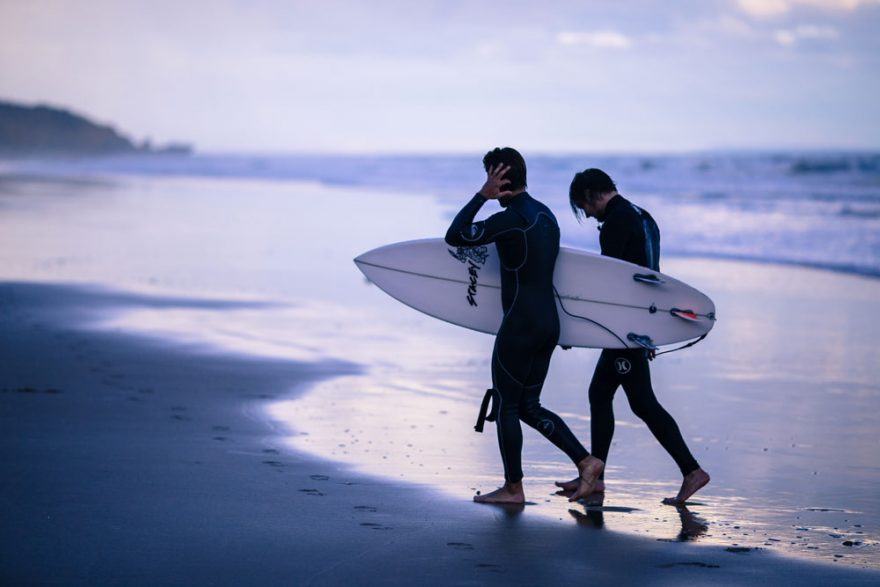 Surf speak has been around since as far back as 1920, but it was only in the 1950s when it really began to take off. Since then, more and more words have been added to the language of surfing, and it gets used commonly around the USA and other countries.

If you want to brush up on your surfing lingo, read on, and you’ll soon be a pro. You’ll be able to hold your own at any beach you go surfing. Here’s your A to Z glossary of surfing terms.

Air – A maneuver where surfers become airborne. Something you will see more in advanced riders as it requires a lot of speed and excellent timing.

A-Frame – When a wave goes into a peak then it breaks off both ways. The name comes from the shape of the wave; it looks like an A when it first peaks.

Backdoor – Where a surfer will take off on a wave at the farthest side of the peak and surf through the barrel.

Back Off – Where the wave at first is steep and ridable but then goes flat and lacks power.

Backhand – This is when a surfer rides a wave with their back facing towards it.

Bail Out – Jumping or diving from your board when you get into a sketchy situation. It most often happens when a wave that’s too big confronts a surfer during the paddle out.

Banks – Banks are formations that the waves leave behind on the seabed. Good banks mean good waves and good waves mean a great surf.

Barrel – When the top of a wave is moving faster than the bottom, it creates a hollow. It gets referred to as a barrel, and the aim is to get inside of it.

Bonzer – A board that has five fins.

Carve – To perform a smooth, long and powerful turn.

Clean – Not referring to the cleanliness of the water but the type of waves. Clean waves are those that are smooth and break well thanks to offshore winds.

Close Out – When you get a short ride due to the wave breaking all at once.

Cutback – When the surfer performs an S shape by changing direction while on the wave and going back to where the power is. They then change direction again to go back down the line.

Drilling – When a big wave causes you to fall off your board, it’s referred to as a drilling.

Drop In – When a surfer takes off on a wave that another surfer is already on; if you want to avoid ructions, don’t do a drop in!

Elephant Gun – A board that has been designed for a big surf.

Face – The front of a wave.

Fin – On the bottom of a board you’ll find anywhere between one to five fins. Difficult to miss, they extend from the board.

Fish – A surfboard that is broad and short. Ideal for riding smaller waves.

Floater – Instead of riding the face of the wave, the surfer will ride over the top of a broken wave.

Forehand – Riding a wave in the direction that you’re looking.

Glassy – When the water becomes smooth from there being no wind.

Gremmie – A novice, someone who’s not great at surfing.

Grommet – Refers to a young surfer.

Gun – A long and thin board used for surfing big waves.

Heavy – These are powerful waves that get the name heavy as that’s how they feel when they break on you.

Inside – The inside section of a wave where it becomes faster and steeper.

Keg – Another word for a barrel.

Kook – Someone who’s stupid, a bit of an idiot and they can’t surf well.

Leash – This is the cord that keeps a board attached to the surfer.

Line Up – This term refers to the area where you sit while waiting for waves.

Lip – The part of the wave that thrusts forward when it breaks.

Longboard – Not the same as a Gun, a longboard is typically around 8ft long, and designed for small and medium waves.

Messy – Opposite of clean. When the waves are messy, it means that the wind is blowing onshore. The waves will be ragged, and their form will be spoilt.

Offshore – This is the perfect wind direction.

Onshore – Not the ideal wind direction.

Outside – Opposite of inside.

Over The Falls – When a wave breaks and the surfer falls from the top of the wave to the bottom.

Pearl – When the nose of a board sticks in the water and brings the surfer to a halt.

Pin Tail – Describing the pointed or rounded tail of a surfboard.

Pop Out – A beginner’s board – make from plastic and filled with foam.

Rail – The side of a surfboard – the part where you turn on.

Regular Foot – A surfer stands with their left foot forward – the opposite of goofy foot.

Rip – A strong current or tide that can often become dangerous. Paddle across a rip, not against it.

Shacked – Another word for barreled and tubed.

Shorebreak – Waves that break close to a beaches shoreline.

Sick – Saying something was good or cool.

Skeg – Another word for a board fin.

Slab – When a wave comes out of deep water and enters a shallow reef.

Snap – A turn that is sharp and fast.

Spray – The water that is thrown up when a surfer performs a large turn.

Stoked – When a surfer is happy, excited or pleased.

Swallowtail – A type of tail, it’s shaped like a W and also like a swallow’s tail. Hence the name.

Switchfoot – Someone who can surf with both a regular and goofy foot.

Tight – Refers to a board that’s hard to turn.

Tube – Another name for the hollow or barrel of a wave.

Wax – A product that’s applied to the top of a surfboard, so the surfer has some grip.