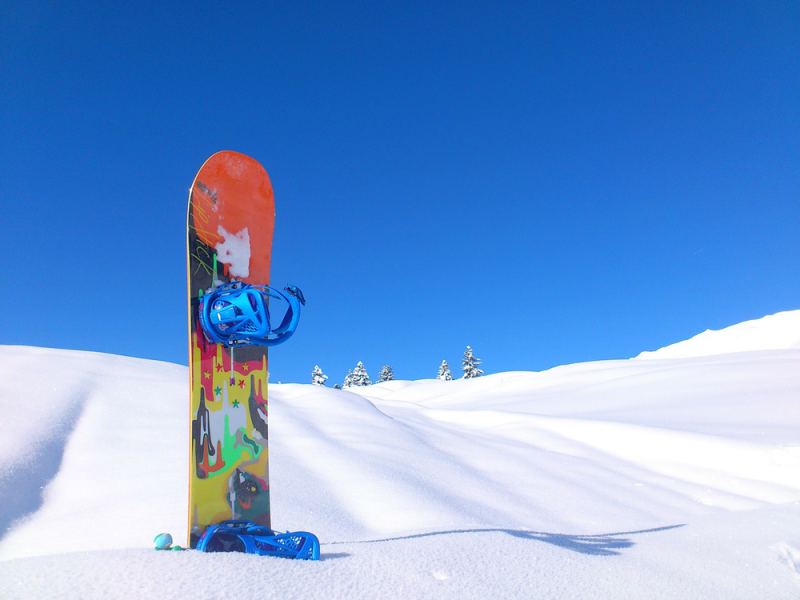 Modern snowboarding has been around since the mid-sixties when Sherman Poppen invented the first version of a snowboard. We take a look at how this first snowboard came to be and how it has evolved since then.

The story goes that on Christmas Day in 1965, Sherman Poppen noticed his two daughters were getting a little restless. That’s when he got the brilliant idea to take two of his kids’ skis and bind them together to form what looked a little like a surfboard, so they could use it to play on the snowy hills near their home. And his girls? They loved it!

It became such a hit with them and the kids in the neighborhood that in 1966 the idea for the Snurfer was patented. It would be the first commercially available snow surfer, made out of laminated wood. It measured 42inch x 7inch and had a rope attached to help riders guide the board. While initially pegged a novelty item, it soon found it’s way into the winter-sports equipment category and sold over half a million units that year.

In 1969 Dimitrije Milovich started making his version of the snowboard, after being inspired by the cafeteria trays he used to slide down the hills while in college. He worked with Wayne Stoveken, a surfboard designed, to develop a new type of board. It was based on the surfboard and took inspiration from the newer short boards, while built to offer a different experience than the ski.

He started the company Winterstick, considered the first snowboard company, and launched the classic swallowtail board. This light, durable, and responsive design is still very similar to what you see on today’s boards. While this initially had steel edges, he soon removed them, since he found they were not necessary for deep powder.

It wasn’t always easy for snowboarders. In the early days, they would have to sneak onto the slopes at night, as ski resort managers would tell them their insurance did not cover snowboarding. Milovich obtained confirmation from Petit-Morey and Kendall Insurance that they were, in fact, covered. After that, everything changed.

You started to see more snowboards produced, notably, by Mike Olson and Jake Carpenter Burton. Burton focused on laminated hardwood prototypes and attached bindings to the snurfer, something which had never been done before. Olson used planks of pine for his boards and would later go on to found Gnu snowboards. It was a big year for snowboarding, with plenty of innovations taking place.

Bob Webber and Tom Sims went on to design the Flying Yellow Banana in 1977, which was a bit of a milestone in the history of the snowboard. The bright yellow color helped give it its name. The board was in the shape of a flat skateboard and built from wood fixed on top of a sturdy plastic shell. The following year, Chuck Barfoot of Barfoot Snowboards invented a fiberglass snowboard prototype.

In the 1980’s, snowboarding had cemented its place in sports history. Designs became far more standardized across the industry, and p-tex bases were added onto the boards of Burton and Winterstick. In 1982, the first National Snowsurfing Championship occurred, with racers clocking speeds of over 60 mph.

The following year, Jeff Grell designed the first highback binding. However, some do dispute this and argue that it was Louis Fornier who designed it first. In ’85, some of the snowboards by Burton and Sims had metal edges added in, and Sims introduced the first freestyle snowboard to feature a rounded tail, known as the Terry Kidwell model.

Companies moved away from the early fin design inspired by surfing, as they looked more and more towards ski technology. The following year the standard snowboard soft-boot design was produced by Burton, featuring an inner liner.

That Brings Us To Today

These days, you will find snowboards made in various shapes, styles, and materials. Boards will typically vary regarding length, width, sidecut, flex, camber, and tail and nose width. You still have new designs coming up all the time; only time will tell what the future brings.