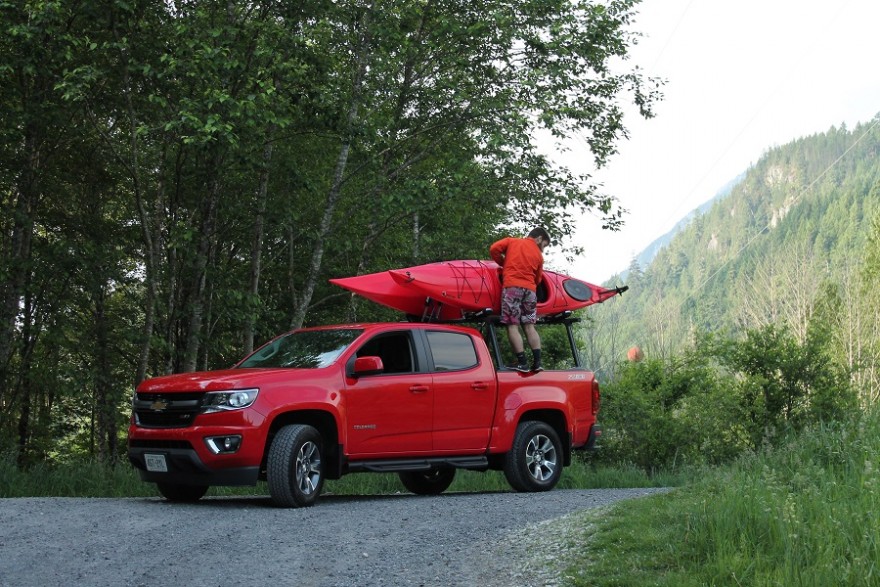 Loading kayaks on or off the Chevrolet Colorado was an easy task.

Seeing the mountains from an airplane feels like a privilege. It feels like cheating, like the view should be worked for, worked at, climbed to, sweat for.

But it also instills an excitement in any outdoor enthusiast that’s hard to match. I was heading from Detroit to Vancouver, passing over the mountains that lie just east of Seattle, when I saw a few lone peaks fight their way through the clouds, like heads popping out of the ocean to breathe.

I was sent to Squamish, British Columbia to experience what the Chevrolet Colorado has to offer, and within an hour of getting out of the Vancouver airport, I was driving one by myself speeding down the Sea to Sky Highway, the road that connects the two cities and boasts some of the most beautiful views in the province.

Back in the United States, I drive a Chevrolet Aveo, a tiny egg-looking car (that I love, and has gotten me across the country and back), that makes driving trucks often a very different experience. Driving the Colorado was easy, the truck was responsive and was barely different from driving my golf-cart. In-vehicle GPS made finding my way around Squamish easy, and finding my way to the first hike of the week was a breeze.

A small preview of the views from the Squamish River.

Hiking to the top of The Chief, the granite monolith that overlooks the city of Squamish, is an absolute must, and a hike that truly puts a stairmaster to shame. Going at a steady but slow pace, the hike took about an hour and a half, and we took some time to rest and take in the views at the top. The hike was definitely challenging, but doable for anyone that’s in somewhat good shape.

I had the pleasure of hiking with a Squamish local, who added to the hike immensely by providing facts about Squamish, the wildlife, the forests we went through and the rock we walked on. It was the perfect introduction to a town that would quickly become one of my favorite places to date.

The next day we loaded up the Colorado with a few kayaks—made easy by the load system that’s made for the truck. No fitting Yakima bars, no messing with Q Clips, putting the kayaks on the truck was easy, and we set off for the Squamish river for a trip that ended up being more of a float than a paddle.

The views from the Squamish river are better than anywhere in town, being at sea level and looking up at the towering mountains that surround is an amazing contrast everyone should experience.

As it turns out, we were smart to just float down the river instead of paddling away and tiring ourselves out because later on, the mountain biking began.

We now loaded the trucks with bikes, and as we climbed further up the hill it started to set in with me: I have no idea what I’m doing. I’ve never been mountain biking, and I’m about to be set loose on top of a mountain. Maybe not the best idea. We rode Half Nelson, and Pseudo Tsuga, trails that attract bikers from around the country.

The view from the top of The Chief.

The climb on the bikes up the mountain put the hike up The Chief to shame, forget the stairmaster. But that wasn’t the bad part. Hurling yourself down a mountain at too-many-miles-per-hour turning corners faster than my brain could process was the hard part. Just as I was starting to feel confident, taking turns and picking up some speed—I hit a patch of rocks that sent me flying over my handlebars and rolling into a tree. Confidence shattered, pants ripped, knee bleeding, profanities flying out of my mouth.

But I got back on and continued, taking tips from the guides and trying my hardest to keep up with the ex pro-motocross rider, two professional guides, and experienced mountain biker. Sometimes you just have to be the weakest link.

Just as we were nearing the end though, and I was starting to feel better about getting higher up on berms, I went straight over one, and once again over my handlebars. This time I was ready to be done. I was five minutes from the end of the trail and once at the end I made it clear that if the bike I was on didn’t get out of my hands in about 30 seconds it was going flying off a mountain by itself.

So mountain biking isn’t my strong suit, and the bruises, innumerable, didn’t exactly go well with the dress I had to wear to a wedding two days later.

But climbing is my strong suit, and ending the trip with learning how to crack climb was just what I was looking for. We spent as much time as we could at the Smoke Bluffs, until it was time to leave.

The ride out of Squamish was a hard one, I was not ready to leave such a beautiful place after such a short amount of time. We took a Colorado to the airport, which allowed me some time to post a few late Instagram photos, using the in-vehicle WiFi.

I’m certainly not finished with Squamish, although I can’t say that I’ll be back to mountain bike.