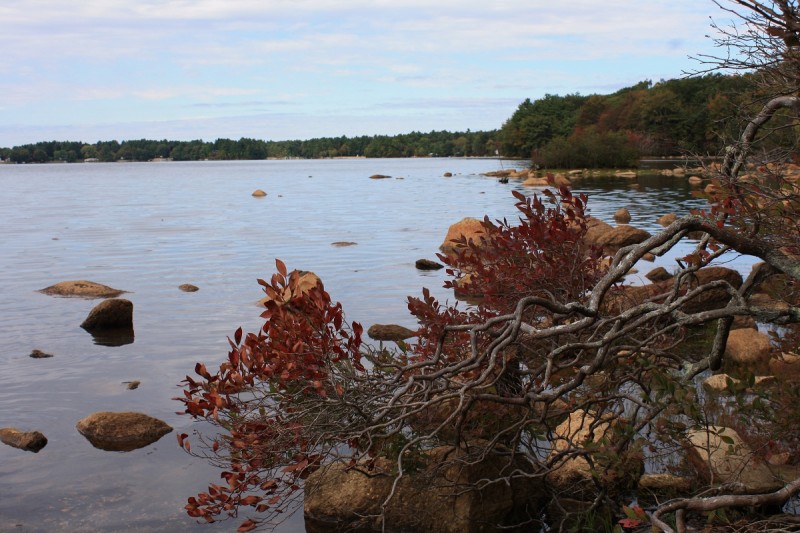 The Walkabout Trail skirts the shores of Bowdish Reservoir. Image by Marty Basch.

You have to love those Aussies. There’s a powerful tradition dating back to the indigenous Aboriginal culture in which people went on a focused journey to make connections with the land, their spiritual side, and ancestors. They called this concept “walkabout.”

Fast forward to the modern age and walkabout has come to mean taking a holiday, or vacation in North American parlance, and leaving the pressures of daily life behind. Many young Australians might take a break after high school or college and go on an extended journey calling it a walkabout. Those North Americans of a certain age might equate it with backpacking through Europe after college graduation.

Thank the Australians for Rhode Island’s Walkabout Trail. In 1965, a crew of more than 300 Australian sailors were waiting for more than a month for their ship the H.M.A.S. Perth to be ready for their trip home. The Division of Forestry was developing the nearly 3500-acre George Washington Management Area in the state’s northwest corner on the Connecticut border teaming with waterfowl, grey squirrels, rabbits, deer and other mammals. The Aussies, with time on their hands, were looking for something to do. The state then asked them to help build trails in the forest. The Aussies agreed and the Walkabout Trail, a testament to Down Under tradition and eager idle hands, was born.

The easy-to-follow Walkabout Trail is a wonderful way to ease into hiking with its three loop options of 2-, 6- and 8-miles in length. The terrain is relatively flat but rocky at times, and there are some small hills. Plus, depending on the season, there can be wet and muddy sections.

But there is much to see along the way of the interconnected routes through wetlands with bridges, scattered boulders, busy wildlife, hemlocks, stands of birch, marshy areas, possible beaver activity and Bowdish Reservoir where those Aussie navy men did some swimming following their toiling in the woods.

Portions of the trail are part of the state’s North-South Trail, a 75-mile trail that spans the state between Charlestown on the coast to Burrillville by the Massachusetts border. The trail showcases the bucolic nature of Rhode Island through its forests, hills, beaches and farms. Though the Ocean State is known for its intriguing coastline and Block Island, the western edge of the state has some wondrous woods to wander, particularly a plus for hikers in northern New England who might want to extend the season once twig season arrives up here.

The trailhead is in the George Washington Memorial Camping Area, a 100-acre enclave with the sandy beach at Bowdish Reservoir. But to save a few bucks on the entrance fee, I was able to legally park outside the campground area and easily strolled to the trailhead after getting directions from an employee (who actually suggested this to me).

The trails were easy to follow. Bluntly, all you need to do is pick a distance and follow the color. Blue is 2-miles, red is 6-miles and orange is 8-miles. The beauty is that you can plan for orange and bail out at red or blue if you don’t have it in you.

The loops begin by a large boulder with a plaque that tells briefly the Aussies’ trail tale: The Walkabout Trail Named And Constructed By The Personnel Of Her Majesty’s Australian Ship Perth During “Operation Black Swan” June 1965.

I followed the orange blazes along the eastern shore of the reservoir. The trail eventually moved away from the glistening waters through some pines and down to the edges of Wilbur Pond with its perch, trout and bass. The path left some wet areas for higher and oft drier ground, narrowing at times and passed by several dirt road crossings, bridges, and hemlock.

I trekked along the stream before ambling upward and eventually hugging the shore of a swampy pond. Soon enough, the bands of colors were joined together for a merry march of about a mile back to the trailhead.

The beauty of loop hikes is that there are times you don’t notice things until you have a second chance of seeing them. Turning around before leaving, I saw some poignant graffiti on a bridge. “Life is a path” it read. You can’t argue with that.