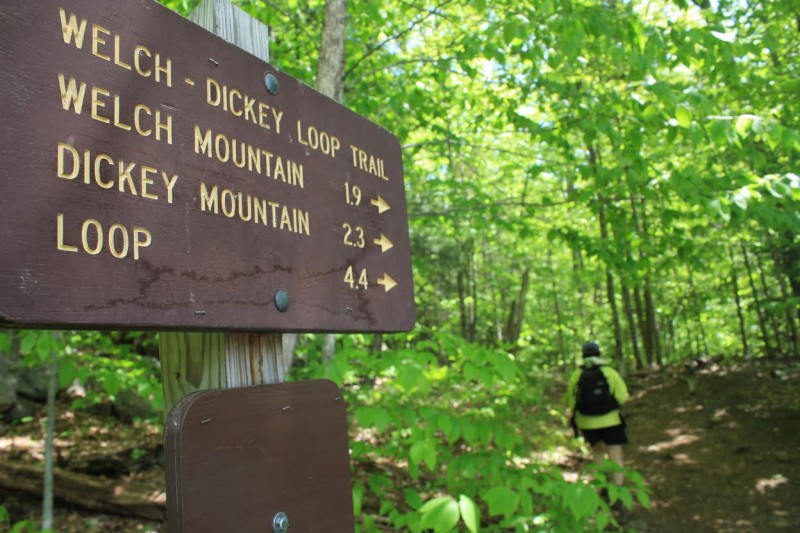 The Welch-Dickey Loop yields a bounty of scenery.

Editor’s Note: 50 Best Hikes in New England (Countryman Press) is a new book written by ActionHub.com columnist Marty Basch. We’ll be occasionally posting abridged versions of some of those hikes.

Double the mountains, double the fun. The 4.4-mile circuit over the top of New Hampshire’s Welch and Dickey mountains is high on the popularity list of White Mountain hikes. Quite simply, the views are superb, seasonal blueberries sweet, plant life educational, and the ledges provide that alpine feeling well below tree line. The granite slabs and bedrock make exceptional platforms but are slippery when wet, so hiking families must take care.

Welch Mountain is the smaller of the pair, clocking in at 2,605 feet. But it’s the winner on this one with its eagle eye look down to the Mad River Valley and across to Sandwich Mountain. Dickey’s no slouch at 2,734 feet with its open ledges and rock slabs.

Keep watch for jack pine on Welch Mountain. Though readily found in the boreal forests of Canada, it’s not very common in New Hampshire. Look for the inch-long needles in bundles of two. There’s also fragrant Labrador tea with its white flowers to be found along the way.

The hike is easily accessible from Interstate 93 and is near the Waterville Valley Resort, which means you won’t be alone during peak hiking season. The trail is also noted for being among the first in the White Mountains to be clear of snow. Those hikers seeking less humanity might consider an off-season or midweek experience.

Almost immediately into the hike, a decision must be made. The moderate trail leads to both mountains and subsequently over both peaks. This hike is described counter-clockwise. Why? It’s about 1.3 miles to the scenic panorama so if you run out of gas—or the kids are antsy—it’s an easy out and back down to the parking area. Plus, this also means hiking up a steep portion of Welch’s south ridge, much better than gingerly going down it.

The right branch leads to a pleasant stream—readily crossed—and then follows the bank for about a half mile on a gentle ascent before making a right and rising to the first of the open summit ledges.

A sign warns hikers they are entering a regeneration area. A heavily used area, by using rocks to cordon off the mosses, lichens, and herbaceous plants, it gives them a chance to spring back to life. To the east, gaze across the valley to hulking 3,980-foot Sandwich Mountain in the Sandwich Range. Also out there is more than 4,000-foot Tripyramid with its jagged peaks.

The trail then proceeds steeply with some scrambling to be done up to the ledges atop Welch, first passing some of those jack pines and some stunted birches.

The Welch summit is reached at two miles with its splendid panorama.  Mount Mooosilauke is to the west. There’s Waterville Valley, and to the south the ripples of central New Hampshire. Of course, there is also Dickey—the next spot on the loop.

The trail descends quickly into the col between the mountains among the spruce, moss, and blueberries before climbing steadily again to the wooded summit of Dickey at about 2.4 miles with its open ledges and vistas to the Sandwich Range and the triangulated Franconia peaks of Lafayette, Lincoln, and Flume.

Views are many from the rocky ledges of Dickey on the descent. Cairns and blazes mark the way along the dwarfed evergreens.

The ledge experience isn’t over with yet. About 3.2 miles into the loop, there is an impressive outlook with an equally impressive drop off. Take a last look at Welch before entering back into the forest with its maple and beech trees. As the trail descends somewhat steeply, it’s back to hardwoods and eventually closing the circuit.