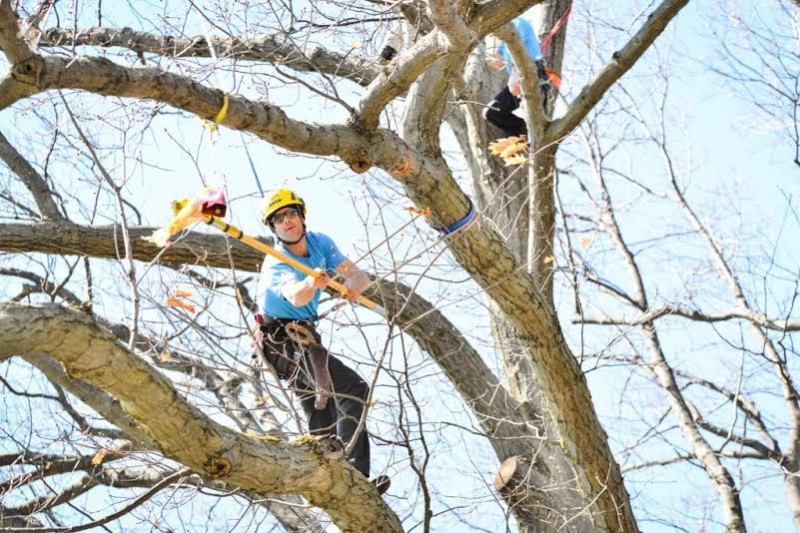 The trees that inhabit Prospect Park in Holland, Michigan, will be sharing space with more than just squirrels come September 27. The 2014 Michigan Tree Climbing Championship will take place in the park’s branches where arborists from all over the state will come together to compete.

The competition, which is hosted by the Arboriculture Society of Michigan, is a way for arborists and foresters in the tree industry to show off their skills, learn from others, and educate the public on proper tree care.

The ASM organization includes arborists and tree care professionals from all over the state. “We consider ourselves tree doctors,” said Annie Kruise, executive director at ASM. The organization is centered around caring for trees and doing everything possible to continue their growth. They also provide education to members and help them maintain their certifications while educating the public about why it’s important to work with certified arborists to service any trees.

The event is what the ASM stands for, produced as a physical event that’s free and open to the public. The competition includes members of the industry who come together to compete and possibly move onto the national competition.

The competition starts with five events, and the overall winner of those goes onto the masters competition. The events are created around situations that happen on an everyday basis for people who work, literally, in trees.

The work climb event, the most true to everyday work, is a sort of widespread race through a tree where climbers have to make it to four different points in the tree, and then come down at a fifth. All events are timed and graded on the climber’s ability to perform the task in the given amount of time, as well as their technique and how safe they are being in the process. The throw-line event involves using a weighted ball pendulum, which a climber in the tree uses to install a climbing line. The points are scored by where the line lands. The ascent “footlock” is a technique that climbers use to get into the trees, and it’s judged on their technique and how fast they can scale the rope. Many climbers can shimmy up a 50-foot rope in less than 20 seconds. The belayed speed climb is next, and this is a timed race to climb the tree itself once a climber is already hooked into the rope and harness. The last event is the aerial rescue, which isn’t something the professionals typically have to deal with on a daily basis. Competitors have to rescue a life-sized dummy from a tree and safely return it back to the ground.

Arborists and foresters swing from the trees with ease.

Since all the competitions are things that people in the industry do on a fairly regular basis, they are always training and working to perfect their skills. The competition brings everything to a head, and also acts as a showcase to others in the business to see what and how their competition is doing.

Bill Drews, owner of Woodland Tree Services in Western Michigan has been in the industry for most of his life. He graduated from Michigan Technological University with a degree in forestry, and from there he began looking at the urban forestry angle, taking visits to Michigan State University’s horticulture campus. Like many others in the industry, he was interested in climbing trees from a young age, but never thought he could make a living doing so.

Now, he puts an emphasis on making sure the work he and the industry are doing is safe and done in a correct manner. “All over Michigan and the world there are tree care people—I put an emphasis on care,” he said.

He encourages his customers to come out and enjoy the competition as well, so they can see how tree care should be done, and how important it is to be done the right way. This year, his son will be competing.

Past competitors will return as well, including Jack Richardson, owner of Guardian Tree Services in Ann Arbor, Michigan. He placed 10th out of 68 competitors at the International Tree Climbing Championship this past August. He will be back for his 13th year of competing. He started in the industry in 2001, falling into the job by chance after seeing an ad that read “tree climber wanted,” although he’s always had a knack for adventure.

“When I was a kid, my parents had tree work done and I saw them swinging in the trees and thought that looked fun,” he said. Now he runs a business, swinging in the trees, for good reason. Richardson went into the business not knowing how much hard work it would be, though, and ended up enjoying the physical aspects of the job, the biology and physics of working in trees, and the risk management it comes with. In regard to the competition, he says it requires a lot of skill, but also a lot of luck. He enjoys the events, and the differences between them.

The industry is kept fairly quiet for the most part. People who become arborists either fall into the job by chance, or already were interested in a job in the outdoors. Competitions at a state, national, and international level raise awareness not only about the safety and practice of proper tree care practices, but about the industry itself.

Drews said he hopes in the future the industry will receive some more recognition. “My hope and prayer is that at some point, high school counselors will ask kids [who] love the outdoors and have this connection with trees, ‘How would you like to become an arborist?’” Until then, he will continue his work in the trees, and continue to practice tree care safely while encouraging others to do the same.

Images courtesy of the Arboriculture Society of Michigan