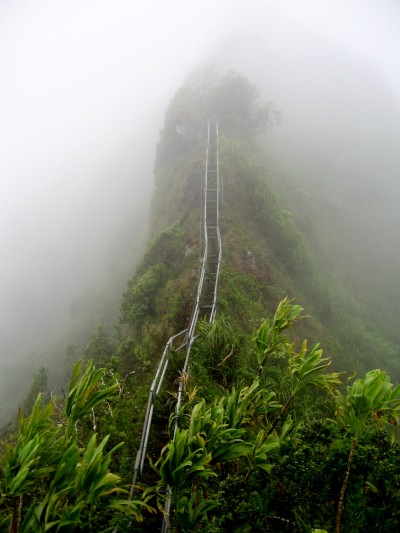 It is one of the most popular hikes in Hawaii, but it’s also illegal.

Called “The Stairway to Heaven,” the trek up and down the 4,000-step Haiku Stairs on 2,800-foot Puu Keahi a Kahoe yields stunning views.

The three- to five-hour hike on the island of Oahu is something of a rite of passage.

But recently, police have started to cite hikers for trespassing.

Hikers often undertake the journey during off-peak hours so as not to alert exasperated neighbors of the property that once housed a secret radio facility during World War II.

According to Hawaii News Now, area residents often booby trap their properties to prevent trespassing, while a security guard can be stationed during the morning to call police if trespassers are spotted. The stairs have been closed to the public since 1987.

“It’s particularly a nuisance because the trespassers usually come in the middle of the night, so it’s good there is a lot more police presence around,” Rick Barboza told HNN.

He owns 12 acres of land in the area.

“It would be good to let people know that there is going to be more police presence, so I would take advantage of one of the other hikes that is state sanctioned and safer,” he continued.

The contentious stairs have been the subject of debate for more than a generation. A working group task force comprised of various landowners and managers has been formed to come up with some sort of recommendation to find access so hikers don’t go through private property.

A suggestion could come as early as October.

The city of Honolulu has spent nearly $900,000 over the years to repair the stairs with the idea of reopening them.

“It is such an incredible experience to be up there that people need to be able to do that, but legally,” Vernon Ansdell told KGMB-TV.

The doctor is on the task force and lives nearby.

“The meetings are quite lively,” Ansdell said. “Clearly we have to do something. Right now things are escalating and they’re out of control. We need to fix it.”

Hikers are also warned by signs. A photo of one taken in 2007 states the ladder consists of 3,922 metal steps that lead to the crest of Ko’olau Mountains and spectacular views of the windword O’ahu coastline and Kane’ohe Bay.

“The trail follows a narrow ridgeline with abrupt and concealed edges and steep slopes. If you fall, you will be severely injured or killed. Stay on the stairs.”

The volunteer Friends of Haiku Stairs maintains a website and dedicates itself to protecting the stairs and surroundings. The property contains the Upper Hoist House, a concrete block building that was once the “upper terminus of a cable car that was the primary means of moving men and equipment up and down the mountains.”

There is also the Communications Control Link Station with its microwave antennae that contained “emergency communication backup.”

The trek towers above the H-3 freeway and is also known for its flora and fauna of native species.

According to the organization, the stairs have also been called Haiku Ladder and Pali Ladder. It is a series of galvanized steel ship ladders that are 18 inches wide and some 4,000 feet long over an average slope of nearly 30 degrees.

“Each section of the ladder contains seven steps, and the sections are numbered consecutively to the top,” the website states.

“The stairs are closed and illegal to access, no matter how you access them,” it continues. “We do not provide information that will aid people in breaking the law.”

Watch a video uploaded by Samuel Nowack of climbing the stairs: