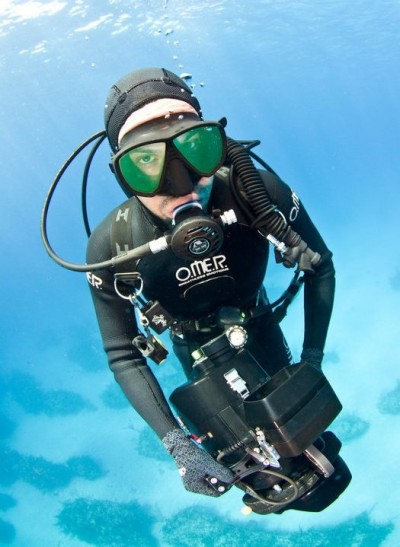 Raised in the Azores, a group of nine volcanic islands that form an autonomous region of Portugal, Joe Romeiro was accustomed to interacting with marine life. His love for the ocean was developed early on. He saw his first shark when he was five years old, which spurred a love for the animals and, eventually, an inspiration to educate others about them through a career in film.

Now an avid contributor to Shark Week and co-founder of 333 Productions, Romeiro has helped to create four award-winning films—Silent Requiem, Death of a Deity, A Lateral Line, and Shark Culture. His work received the “Best New Filmmaker” and “Best New Cinematographer” awards at the Blue Ocean Film Festival in 2009, the “Underwater Video of the Year Award,” at ADEX in 2010, and the “Ocean Inspiration Award” in 2011.

In addition to his relationship with Discovery for Shark Week in 2012, 2013, and 2014, Romeiro’s work has been featured on National Geographic, BBC, and Good Morning America, among others. During a recent phone interview, Romeiro told me about his background, his work with Shark Week, as well as his goals for the future.

When did your fascination with sharks begin?

It’s always been sharks. The first shark I saw was a blue shark, and it was this gorgeous ribbon of an animal—it was just beautiful and really intrigued me. But I guess it’s also just what people find interesting—people love sharks. I guess my interest is similar to everyone else’s—it’s an admiration.

When did you realize you wanted to make a career in underwater cinematography?

My first experience really was swimming with blue sharks and mako sharks. It was my first time on an actual dive where I saw a shark while underwater. There was a seven-foot blue shark and a two-foot mako, and it really was like what I expected, but the mako was so small yet so fast and just darted around. It was kind of crazy. But it immediately clicked for me when I was there. I didn’t know I was going to do camera work for Discovery, and I had actually been working as an artist for the first part of my life, into my early twenties—that’s what paid for my scuba equipment. I knew I wanted to see a great white and wanted to get more involved in filming. It wasn’t about making a name. In the beginning, it was really about showing my dad what I had filmed. We spent a lot of time on the water, but it was great to be able to show him what was [under the surface]. I was able to go down there and take a video, then bring it back to him.

When did you get involved with Shark Week?

It was three years ago. But before that, just personally, I began buying bigger and better cameras. I was doing well at my job then, but I was taking a lot of time off to film–and I spent my savings on equipment. Bill Fisher [a fellow producer and shark conservationist who Romeiro founded 333 Productions with in 2007] and I met on a shark trip in Fiji and made a short film about how many sharks were dying through illegal fishing. We had a friend of ours say, ‘We like your film. Can you make it five minutes for a short film entry?’ It was called Death of a Diety, and Pete Stacker wanted to get involved, so he narrated. We won a few awards, and after that we started getting involved with Discovery.

How do you think the public views sharks, and is that perception correct or incorrect?

Sharks are more afraid of us than most of us know. People always assume it’s coming after them, and even my dad is afraid of what my destiny may hold, swimming with them. But really, we’re not on the menu. It’s all about understanding through [coming into contact] with them, which most people [don’t get to do]. Movies like Jaws have negatively informed people, but parts of Shark Week are actually educating the public on what these animals are like.

What are your goals for the future?

I definitely want to do more work like this. I want to play a real role in Shark Week and become like my predecessors. The people who have worked here for years, they’ve made the lives they wanted and revolved them around these animals. One day I hope I can do that. I also want to work in every aspect of cinema. Since doing [this work], I have more gratification for my life. This is one of those animals that’s powerful and iconic—when they look at you, stare you up an down, and you look back—it consumes you, it’s a really big moment. I always feel like I’m five years old again.

To learn more about Romeiro, check out his website.