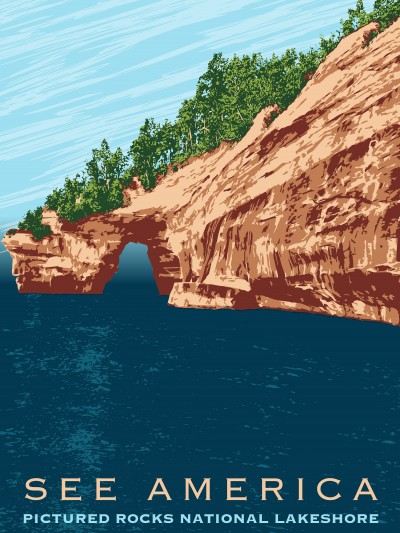 The 1930s was a good time to be an artist. Following the Great Depression, Works Progress Administration started the Federal Arts Project and enlisted more than 5,000 artists to create work for non-federal government buildings, creating massive amounts of art and providing jobs to those artists.

In 1938, a new campaign surfaced. Artists were creating colorful silk screened posters under the quaint phrase “See America,” in an effort to encourage tourism to national parks.

Now, almost 75 years later, the Creative Action Network has picked up where they left off, creating a crowd-sourced project named, of course, See America.

Creative Action Network began in 2008 when Max Slavkin, current CEO and president, and Aaron Perry-Zucker, chief creative and operations coordinator, got together. The two had been friends since a young age and collaborating all the way. They began with the campaign Design for Obama, inspired by the work Shepard Fairey was doing for the presidential campaign. They decided to take it into their own hands and harnessed the power of 700 artists to create prints for something they genuinely cared about. All the work was crowd-sourced, anyone could submit a poster design, and everything is for sale on the website.

Since then, Creative Action Network has used the original pool of artists from Design for Obama to create a community that is continuing to grow and make a change. Artists worldwide submit work to the several projects CAN houses.

See America got roped into the CAN family because Slavkin had always been interested in the Federal Arts Program, and the notion of the government investing in things we use, including the arts and the public needs, for the civic good.

For Slavkin, it’s important to him on a personal level. “I love going to the parks and I want to take my kids there,” he said. He’s not alone, and that’s evident by the success they’ve had with the project from the beginning.

Slavkin thought that See America was catchy, and at the time when the artwork was being created there weren’t very many national parks. Now, there are more than 400.

Many of the posters created for the CAN project aren’t a far throw from the original prints. Bold colors, thick lines, and clean fonts make up a fair portion of the 650 designs that are available.

All of the designs focus on a national park, recreation area, or a generally interesting spot. There is a slew of designs to choose from for every state, and there is an artist from every state to go with it. This is in stark contrast to what they started with—the project began in January 2014 with about 50 posters and not all of the artists were well known—the playing field was level and it continues to be. It has grown to become a nationwide campaign that not only benefits the artists—with 40 percent of a sale going back to them—it also benefits the national parks.

“It’s brought in a younger, new audience for the National Parks Conservation Association, and it was, other than our work around government shutdown, the most successful campaign we’ve had on social media,” said Perry Wheeler, media relations manager for the NPCA.

Slavkin got in touch with the NPCA via Twitter early on in the project, and they thought the project was a great fit. Now See America is sponsored by the NPCA and they continue to work together in an effort to bring more people into national parks.

It’s worked, too. The project has not only introduced the resources that are national parks to younger generations, but also provided a positive campaign for the parks, instead of a program highlighting what could be changed or made better.

“The sky is the limit of what we can do together when we set our minds to it,” Slavkin said. “So many people love the parks and believe in them, and we have to save them.”

Spreading awareness and bringing people to the parks, especially a younger generation that isn’t as typical, is essential to their cause and they will continue to further the project.

Right now, they have prints, pillows, totes, T-shirts, greeting cards, and mugs for sale. They hope to continue to add product as the designs keep spilling in. The NPCA will continue to work with See America, and there’s a possibility to draw more attention and create more opportunity for the National Park Service’s 100th birthday in 2016.

In the future, See America hopes to print designs on different things including sleeping bags, stamps, and postcards. They are also hoping to curate trips through the parks, and open up the design floor to more local spaces such as state or city parks. They also hope to continue showing the project in galleries, an aspect that has been successful so far.

The first of the exhibitions was launched at the FDR Presidential Library in Hyde Park, New York. Since then, the traveling prints have made their way to San Francisco, California, Knoxville, Tennessee, The U.S. Embassy in Bahrain, and currently in the Interior Museum in Washington D.C. The project is on the move, and will continue to exhibit wherever it can.

For Slavkin, the goals he set originally keep growing.

“The goal for us keeps moving, and in a larger way it’s that every artist can make a living creating arts,” he said. As far as the parks go, he’s still working on that.

“I can’t say that we’ve saved the parks,” he said. He’s sure on the right track, though.

By purchasing art by the artists, that is contributing to a cause that maybe isn’t saving the parks now, but has the initiative, the hopes—and maybe down the road—the resources to at least get a running start. See America picks up what the old America saw, and revives the spirit while getting people outdoors.

“When there’s so much artisanship and brokenness, it really brings people together,” Slavkin said. “The parks unite us in ways that nothing else really does.”