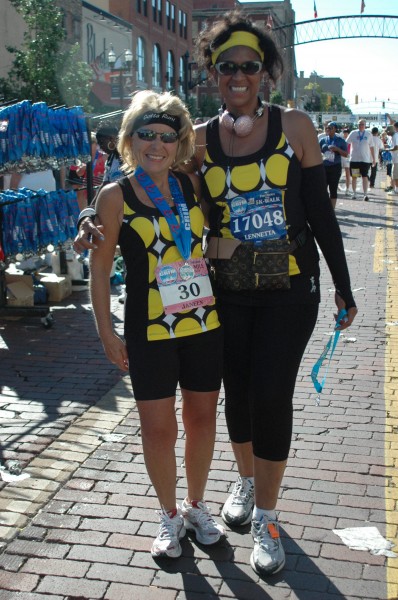 Everyone finishes with a medal after the Crim races.

A painted blue line runs alongside the curb and follows the twists and turns of Flint, Michigan. For 363 days out of the year, it’s simply a reminder, but for a few days in August, it’s the map that leads thousands of runners and walkers to the finish line of the Crim Festival of Races.

Thirty-seven years ago, Bobby Crim was the speaker of the state house—and was also looking for a fundraising event for the newly-instated Special Olympics. At noon on August 27, 707 runners took off from the starting line and a tradition began. Since then, the race has gained a few more runners and spectators. In 2012, the race attracted 60,000 people to downtown Flint, which would usually have a sparse crowd for a Saturday morning.

The race raised $30,170 for the Special Olympics. In 1985, the race became a nonprofit organization, and it kept growing in popularity.

Since the ’90s, the race has been known as the Crim Festival of Races, as there were other races added including a 10 mile, an 8k, and 5k, the Teddy Bear Trot, and the Michigan Mile. With the expansion of races, participants, and onlookers, “Crim Weekend” is a pretty big deal in downtown Flint now.

Starting on Thursday with the Health and Fitness Expo, the events begin to kick off. Runners, friends of runners, family members of runners, and people who are just there for the fun of it attend—there’s no limit to who is or isn’t included.

Inclusion is a theme that weaves its way through the route that runners follow. There’s something about running in step with 15,000 people that makes participants feel really part of something, and like they have a place in the organization.

For many people who grew up in or around Flint, there’s a certain amount of tradition and nostalgia that’s tied to the races, and the crowds they bring. Director of Races Andy Younger grew up watching the race from where he lived, alongside the route. Family members and friends would run the race, but it wasn’t until college when Younger began running.

Now, the race isn’t just a one-day event. It has manifested into an entire organization focused around invoking fitness and health into the lives of Genesee County residents—and beyond that.

“Really over past eight years we have not only evolved symbolically, but intentionally invoked to a health and fitness organization,” he said. The Crim Foundation offers runs year round as well as events and provides maps and resources for anyone looking to get active. What started as a 10-mile race has turned into an entire organization focused on the betterment of a community.

Volunteer for 20 years and now Volunteer Coordinator, John Hartranft has seen the changes firsthand. As well as the massive growth that the races have undergone, the sense of community and inclusion has grown as well.

“I kept volunteering because I kept seeing it grow,” he said. “It’s a great example of Flint’s opportunity to include anyone that wants to be included.”

The amount of volunteer members that are involved—year round—are largely important to the success of the races as well. Come Wednesday before the race on Saturday, 2,500 to 3,000 volunteers pile into the city to help the race run as smoothly as possible, and they even stay for cleanup into the next day. Some volunteers help year round.

Over the years, with the growth of runners and crowds, the community has become stronger and more involved. Come race day, there are countless cups of water offered to racers, endless words of encouragement, and some community members even let racers use their personal bathrooms. It’s a family affair across 10 miles, and it doesn’t stop at the finish line.

The time building up to the race and after are filled with a sense of all being in it together. Younger agrees that the race becomes very personal for everyone involved.

The sense of community is made even more obvious by the wide range of people that participate in the race. Runners from all over the world come to take part. In the past 20 years alone winners have come from Mexico, Kenya, Ethiopia, Russia, Morocco, and Tanzania.

Racers line up at the starting line downtown Flint.

Sure, there are professional runners and elite athletes that run the races, but many participants are teachers, store managers, students, writers, and people who, even if for one day, are interested in bettering their health and taking part in something that means a lot to the city of Flint. The race is as much of a fitness event as it is a social and community gathering.

Now, with so many different lengths of races, it’s accessible to everyone. The night before the bigger races, there is a Michigan Mile race open to all experience levels sponsored by the University of Michigan Flint and also a professional race, along with four other races. The weekend is filled with different opportunities to get involved, no matter the experience or age.

As for the future, Younger hopes that it continues to grow. The most popular race, the 10-mile, has been capped at 10,000 people to ensure that everyone has the best experience and it isn’t too crowded. Changes have to be made to accommodate for the growth that happens every year. It’s certain that one thing will remain the same for the Crim Festival of Races though—the community involvement and sense of belonging that surrounds the events and everything they come with.