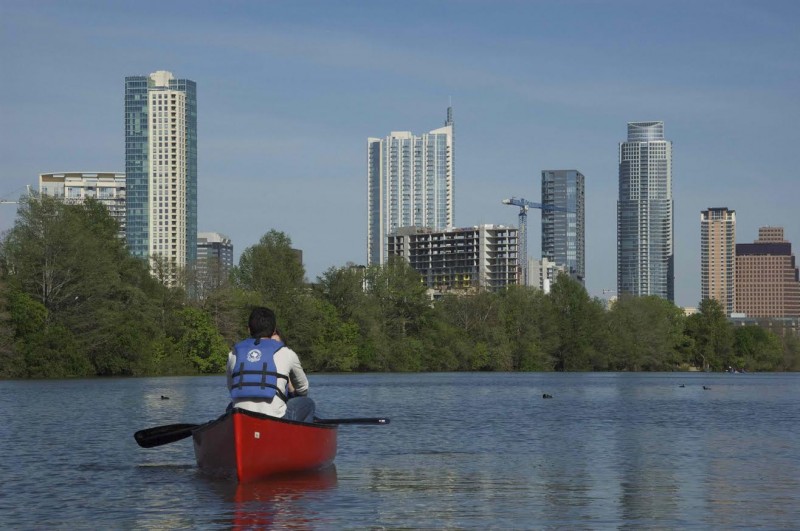 If you prefer city views by boat, there's a paddle for that.

Shane Townsend’s first memory is his father buying their family a canoe—he was three years old at the time. Now, Townsend is a few months from the launch of his book, Paddling Texas, scheduled to hit shelves on November 1.

Paddle sports have played an active role in Townsend’s life, obviously since a very young age. He chocks it up to something like brand loyalty, and growing up around the water. “Water has always been a very important part of my family,” he said. “I grew up on the back of a river.”

Growing up in Pascagoula, Mississippi, his family was always connected with water, sometimes in ways less ideal than kayaking for fun. When there were hurricanes, he would take canoes between houses in the flooded streets. Not only has paddling been an important means of transportation in his life, but it’s an activity Townsend enjoys and has taken with him to every place he’s planted himself.

He’s certainly moved around, starting in Mississippi, then moving onto Virginia for graduate school. After that, he applied to the Peace Corps, and finally got a call that sent him to an indigenous Amazon community in Bolivia. He later switched gears completely and moved to the bustling city of Manila, Philippines. Now, he lives in Austin, Texas, which brought him to his new book.

Townsend was looking to get back into paddling, so he visited REI in search of a book about paddling trips in Texas. He was disappointed to find there wasn’t one.

“Why don’t you write the book?” his wife asked, and after a good laugh and a few hours of thought, he reached out to Falcon Guides, a popular outdoor recreation publisher. Within a few weeks he had quit his current job, bought a $500 kayak, and began exploring Texas.

Friends aren’t hard to come by on the river.

Townsend started by enrolling in the Texas Master Naturalist Program, which taught him about the natural history, geography, and environment in Texas. The three-month course was a way for him to dive in and get familiar with the state.

Then began the paddling, and with that, the travel. Often Townsend would have to drive six hours to reach a destination, and over the course of six months, he visited 50 locations.

Actually getting out and doing the paddling was the best part, of course, and the travel was just an added bonus. Texas is massive, and even though it’s commonly thought to be a relatively dry place, there is endless water to explore.

That’s not to say the drought hasn’t affected the state though. Sometimes when Townsend would show up to a site, paddle in hand and ready to go, the water wasn’t quite where it said it was on the map. The paddle he experienced this at was outside of Dallas—Townsend carried his boat down to where there should have been water.

“I went to the ‘should be’ edge and there’s no water, and there’s no lake,” he recalled. “I walk a little ways, 100 yards, and there’s an old creek. All the water has gone away [and] all that’s left was a creek with a foot of water.”

The historic drought that Texas is in has made itself evident in Townsend’s travels. Along with the loss of water, he’s lost a few pounds.

“I didn’t expect how quickly I would get in shape,” he said.

Writing the book came with quite a few unexpected changes. Among those were learning how to make maps. He had some experience with it in the past, but he wasn’t expecting to spend so much time doing cartography and mapping out GPS coordinates.

“By nature I’m a word guy, not a cartographer,” he said. Right now, he is an outdoor writer. He’s written for USA Today and GAFF Magazine, to name a few. He also works for the Meadows Center for Water and the Environment at Texas State University when he’s not paddling down a river and writing about it.

He’s also been fishing for a large portion of his life out of a canoe or kayak. In Texas, saltwater and freshwater fishing is readily available. Near lakes and rivers, fishers can catch striped and largemouth bass, blue gill, and catfish. On the Texas coast, Townsend has caught flounder and red fish.

The Texas coast is a tough ride for any boat.

As for the book, he hopes it will get people outside and into the water.

Now that there is one, it will provide 40 trips for people to get outside relatively easily and safely. In Texas, there are water and land access issues, so he selected trips that would have minimal opportunity for conflict and would be easy and safe for anyone—of any experience level—to get out and explore.

“Get out and do it,” he said. “Enjoy [the] water and landscape that Texas has to offer.” His book will be a clear guide leading people to those landscapes.

By making the trips and traveling, he’s put himself into a new community and has seen how people interact differently with water. He’s learned a lot about the state, and paddling it has put him outside in a very quiet way.

“It’s easy and a fun, non-intrusive way to experience the world,” he said. “You’re just all in the water.” Surely being encompassed by rivers and lakes is a quiet way to experience the outdoors, and the water that’s in Texas. He encourages people to get a map, get a friend, and get outside. No expensive gear necessary.

The book isn’t even on shelves yet and already, Townsend considers it a success. He’s had plenty of people interested in the book and, for him, the adventure alone has been worth it. He’s driven thousands of miles in the state to places that not many Texans have been, charting and exploring beautiful places, creating a tool for others to do same.