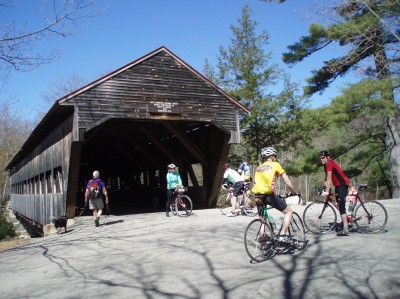 Cyclists must deal with pesky insects while riding.

They patiently wait at the crest of a hill as you shift down and slow. When you do, they pounce, swarming around for a chance at sustenance from a mobile blood bank.

But the crest of a hill isn’t the place they seek to chow down. They favor wetlands and bogs, both roadside and in the woods.

Should you stop anywhere the wind isn’t blowing, their internal radar finds you in no time to form a quick collective right ’round your head.

Hah, sometimes they don’t even wait for you to stop.

How many times have you been riding along, whether talking to a friend or yourself, or just sucking in air through your mouth, and they go kamikaze against the hangar you call a mouth and smack you right in the back of your throat?

Bicycling with bugs is an unfortunate unpleasantry associated with cycling. Insects are annoying. Though chocolate covered ants, oven-toasted crickets, and pan-fried grasshoppers certainly have their places in culinary adventure, not everyone is endeared to entomophagy and it’s unlikely a “pestaurant” is coming soon to a strip mall near you.

Not only do insects swarm and make for lousy sashimi while in motion, they also can irritate an unprotected eye and land on your shoulder as an unexpected hitchhiker. Annoying, yes, and perhaps even the cause of a quick motion on the handlebar that can domino into a mishap.

Interestingly, it’s possible that the very color of the clothes used by cyclists to be seen are part of the swarming problem.

A guide for London’s cycling Metropolitan Police patrol addressed that. According to an article in The Telegraph from a few years ago, “The guide also adds that during the summer ‘there are swarms of insects often attracted by the bright fluorescent colours the cyclist is wearing. The wearing of suitable eye protectors is essential.'”

Check for ticks after riding in the woods.

So, what’s a cyclist to do?

Eye protection is one easy way to battle the bugs. Sure, not every pair of glasses can keep the flying fiends away, but it’s a great roadblock for guarding against airborne objects like sand and stones.

Taking that up a notch is Colorado-based Wide-Eyez. It’s a shield that attaches to your helmet and is being touted as a piece of equipment that deflects “constant sun, insects and debris….”

Head netting might be wonderful for pursuits like gardening, hunting, camping, and even walking, but it’s a wee bit awkward for wearing while cycling. That said, it’s a piece of gear that’s easy to carry and works well for a cyclist who plans on stopping for a while. It helps if you are not a fashionista.

Long clothing is certainly a top defense against bug nation, but we’ve reached a time of year when we tend to show more skin while pedaling. For those who don’t mind, cover your skin, whether it be tights and long sleeves or leg and arm warmers or windproof clothing. It’s a good line of defense against ticks while mountain biking too. Don’t forget to check yourself for them after a ride in the woods.

There is bug repellent clothing, but there doesn’t seem to be much choice for the tight and bright cycling crowd.

That leaves bug repellent. DEET or no-DEET, a coating of repellent is the no-brainer in the war against gnats and no-see ums. Does the repellent stay on as a cyclist sweats? Maybe, maybe not. But repellent is also an easy item to carry and reapply over the miles.

Of course you can always pedal faster than the winged insect armies and keep your mouth shut.

But that’s a lot to ask.