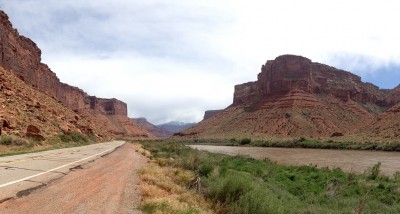 Highway 128 has the best views.

Note: “I’ve never been able to stay in one place for too long. I decided to put the real world on hold and take a road trip to find things to love in the United States. My travels begin in Mount Pleasant, Michigan and will take me to the west coast and back. In about three weeks, the three of us will be stopping in Chicago, Illinois, Denver, Colorado, Moab, Utah, Redwood National Forest, Newport, Oregon, Yellowstone National Park, Badlands National Park and then back to the mitten state. These are the trials, tribulations, and travels of what happens there and in between.”

We’re quickly learning to take the roads less traveled. Most tourists take I-70 to Arches National Park, but the jagged edges and hairpin turns of highway 128 are where real Utah begins in my eyes.

We quickly learned the highway was a scenic byway, and certainly lived up to its name. After a good hour of vast nothingness, giant canyons started to grow around us as we followed the Colorado River toward Moab, Utah. The river fattened, and the walls around it grew taller every minute. Every turn was a new massive rock wall—it was like driving through a mini Grand Canyon.

We’re also learning that the slower the speed limit, the more beautiful the drive. Turn-offs allow for roadside photo-ops, and the relatively barren roads mean slow gawking is always possible.

Initially, we were hoping to stay in Arches National Park, but the campgrounds in the park fill up fast and we were too late, fortunately. Instead we found a beautiful campsite right along the river at Hal Canyon for $15 a night, a steal compared to the $30 for Arches. There are about 7-10 recreation areas operated by the Bureau of Land Management along 128, all with about five campsites each, equipped with a fire pit and picnic table.

Our campsite overlooked the canyon, and we were right at the turn of a bend in the river. We were surrounded by massive red rock walls and fell asleep to the sound of the river. The campsites were fairly large, and we definitely snagged a good one. We arrived around 3 p.m., and were followed by a stream of cars looking for campsites that had already been filled.

We definitely paid the price for one of the best campsites on the river, though. We were downwind from the bathroom that had been baking in the Utah sun for who knows how long, and the stench was almost unbearable at times. The site was worth it for the views, but the bathroom affect was something we will be much more aware of from now on.

There are also a few hikes within biking distance from campgrounds along 128. We chose to hike the Negro Bill Canyon, which is a beautiful trail if you can get over the name.

The trail is about four-and-a-half miles total, and mildly strenuous. The first half of the hike is fairly flat, winding along next to a small river. There’s a fair amount of sand on the trail, and I was extremely glad to be wearing sandals that were good for hiking and also good for walking through water. The river is shallow and a refreshing change from hot rock.

River walking off the trail.

After the trail strays upward from the river, things start getting a bit more challenging and incorporate a good amount of stairs, and a few spots where scrambling up rocks in any way you can is necessary. There were people of all age groups along the hike, including a few dogs, but all the young kids we saw on their way back were mostly red-faced and unhappy looking. I would recommend doing about half of the hike with children.

Just when you start to wonder if you’ve taken a wrong turn, you realize you’re right on track and end up at a beautiful arch that bridges the two canyons and feeds the creek. A trickle of spring water comes from a crack in the massive rock wall, and the shade provides a good halfway pit stop.

We went around noon and definitely didn’t bring enough water. I was carrying a 72-ounce Camelbak and it was dry by the time we met the trailhead on the way back. If you plan on doing this hike at a hotter time during the day, make sure to bring enough water to get you through.

I often find myself in a hurried mindset while hiking, a product of wanting it to be a workout while also watching where I’m planting my feet. Allow yourself time to look around at the beautiful canyon—the hike was the most greenery we saw the entire time while in the Moab area. It took us about three-and-a-half hours total, with lots of river dawdling and canyon gazing.

The town of Moab is worth spending a few hours exploring as well. Filled with tourists, of course, but with a few worthwhile cafes and a particularly wonderful rock shop. The downtown is small and expensive, but a nice break to come out of the rocks and back to reality for a bit.

We underestimated the size of Arches National Park, and didn’t allow ourselves enough time to really explore. We could have spent an entire day there—and then some. Instead, we hit the park on our way out of town when we were already antsy to get on the road and didn’t prepare ourselves for any hiking.

We only spent a few hours in the park, and mostly drove around while staring. It’s like a different world, even from the surroundings. Rock formations spit up from the ground, balancing and taunting the strong winds that blow through.

It’s massive, every part of it. The height of the rocks and the stretch of the land are hard to comprehend, and the further in you get, the better the views are.

The delicate arch, the claim to fame of the park and seemingly all of Utah, was a little bit of a letdown. After seeing billboard after billboard painted with its frame, every license plate and advertisement boasting the attraction, I expected more. Or maybe I knew exactly what to expect, and the mysterious aspect was what was missing.

Granted, we didn’t take the time to hike up to the arch, we only hiked to the higher viewpoint. Even so, it seemed we were missing something.

For me, the most impressive part of the park was the Windows trails. There are a few arches and caves in close proximity, and you can climb up into them. If we had time, that would have been our top choice for a hike.

Moab and surrounding areas absolutely blew away our expectations, though. The grandiose rock formations at every turn are mind blowing and humbling, but we’re onto the next climate. Now our journey turns from red rock to redwoods.