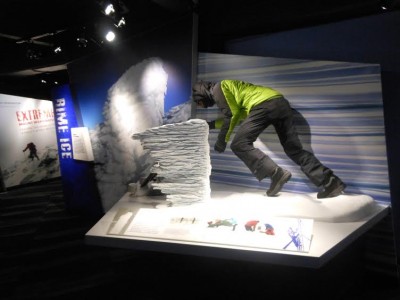 The museum atop the Northeast’s highest peak just got an extreme makeover.

Known as the home of the world’s worst weather and as the place where the highest wind speed ever recorded by man (a whopping 231 MPH in 1934; that record was eclipsed as the highest wind speed ever recorded when an automated weather station on Barrow Island, Australia recorded a gust of 253 MPH in 1996), the new museum called Extreme Mount Washington contains a number of high-tech exhibits designed for weather geeks and outdoor lovers.

A five-monitor display allows for an interactive panorama of a clear day on the summit in all seasons. The weather on the mountain can contain bitter temperatures, high winds, remarkable snow, and incredible ice engulf the peak from late October to mid-May. The observatory has a staff of weather observers stationed on the summit, conducting hourly weather readings for scientific research and educational outreach.

The new museum also contains an exhibit showcasing what life was like for the observers in the 1930s. On display is the anemometer used to record what’s called the “Big Wind” that blew on April 12, 1934.

A captivating element of the museum is a video capturing the winter experience on the mountain. The videographer was embedded with staff for nearly a month to capture the extreme conditions.

Another display records the formation of rime ice in a high-definition time-lapse video. Rime ice forms when supercooled water droplets in clouds freeze onto rocks and structures, creating whimsical feathers of ice that grow into the wind.

The museum contains a number of displays including a look at the equipment used when the wind blew a record 231 MPH in 1934 across the top of the mountain.

Those staffers have quite the commute in winter, being transported to the top in a snowcat. Museum visitors get a sense of what it’s like in a simulator with joystick.

There are big black and white photos shot by mountaineer, cartographer, and photographer Brad Washburn. Washburn was a pioneering climber credited with making many first ascents in Alaska and also for generating early maps of mountain ranges like New Hampshire’s Presidential Range where Mount Washington sits. When he and his wife, Barbara climbed Mount McKinley in 1947, she became the first woman to summit the peak. Washburn first climbed Mount Washington when he was 11.

The old summit museum was created in 1973 and officially closed its doors on September 29, 2013. It was focused on the mountain’s human and natural history.

A construction team from the Appalachian Mountain Club, which owns a number of mountain huts in the White Mountains, began demolition work on October 7 and finished up later in the fall. The AMC construction crew was a natural for the job as they are accustomed to working and living in remote locations.

From a logistics perspective, lots of planning went into the mountaintop museum renovation. All structures and components were designed so that they could be transported to the mile-high weather station in the back of a pickup truck or inside a van.

In early spring, installers staged the new exhibits, all completely fabricated and tested prior to arrival, in box trucks at the base of the mountain.

Once the auto road to the summit was cleared of snow and opened in mid-May, the exhibits were driven to the summit and put in place.

The museum is open mid-May to mid-October. Admission is free to Mount Washington Observatory members, and is included with tickets to the Mt. Washington Auto Road and Cog Railway. Others pay $5 for adults.