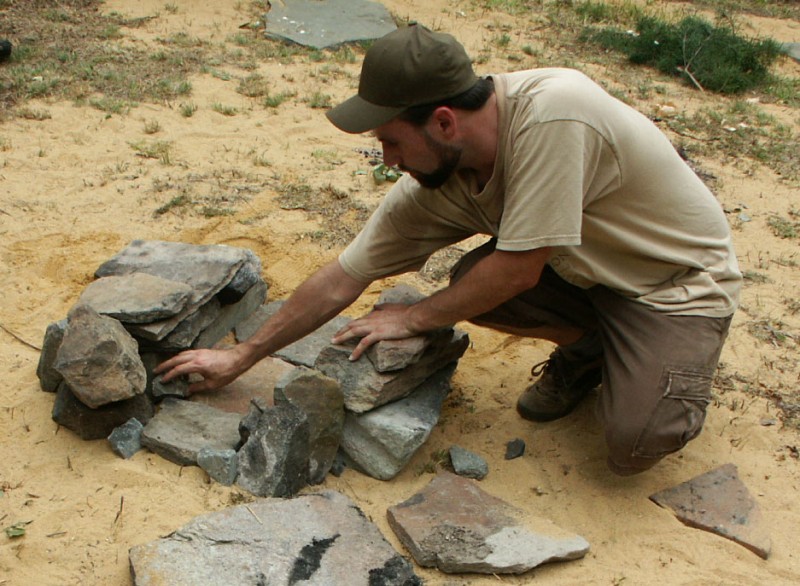 Growing up on a farm, Tim MacWelch was accustomed to being self-reliant in the outdoors. He described his childhood as one characterized by a “do it yourself” upbringing, teaching him the basics of survival skills at a very young age. When he reached his teenage years and began to spend more time camping, hiking, and backpacking, he became more and more intrigued by expanding his self sufficient mindset.

“I figured if I got stuck somewhere, I needed to know what to do,” he said. “I’d go off by myself for some days at a time, so I got a survival book and absolutely loved it. It was Outdoor Survival Skills by Larry Dean Olsen. It was all about skills with the perspective of Native American tools and technology. They lived in the wilderness and were able to make a living there, make a civilization there. It was brilliant.”

While his first introduction to outdoor survival was through the historic skills presented in Olsen’s book, MacWelch soon became interested in modern survival as well. Modern skills are just so easy—what’s simpler than flicking a lighter? he questioned. Although he knew understanding modern techniques was imperative, he approached the topic of survival from a historic perspective in order to be fully self-reliant if he shoudl ever find himself in the outdoors. He said it was his “What if?” mindset that fueled this decision to learn more.

By the time he was 23, MacWelch began volunteering with the Boy Scouts of America and other youth organizations to teach survival skills. As someone who bypassed college and went straight to working in his field of passion, he soon learned teaching these classes was something he really enjoyed.

“People liked me and asked me to come back. Basically, I found out I didn’t suck at it,” the Virginia resident joked.

During one particular event, he was leading a class for children when some of the adults questioned when he was planning to host an event for just them. A lightbulb went off, and he soon started planning survival classes for adults. In 1997, he put his knowledge into something larger and started Earth Connection, a wilderness survival school that is still up and running today. With the success of Earth Connection, MacWelch decided to expand his business to another audience. Three years ago, he created Advanced Survival Training, which is focused on emergency preparedness rather than historical survival techniques. It’s this most recent business that drew in a big clientele of military and law enforcement students.

Since Advanced Survival Training opened its doors, MacWelch has worked with search and rescue teams, representatives from all branches of the United States Armed Forces, the State Department, and personnel from the Department of Justice.

“I do have some friends that I’ve made over the years through this business, and they will teach with me periodically,” he said. “But at the end of the day, it’s kind of a one-man operation.”

While the class schedule varies by season, he said it’s mainly weekend classes and one week-long class each month. The peak times for student enrollment are in April and October, and he said those thinking of participating should expect a set curriculum. For example, on a two-day wilderness survival class, he would start with shelter building, knot tying, water purification, fire building, trap building, and fishing.

But other classes are more specific and may last for just one day, with some focusing only on wild edible plants.

Now, the survival expert is compiling all of his advice into a book, Prepare for Anything Survival Manual: 338 Essential Skills, in association with Outdoor Life. MacWelch has been working with Outdoor Life since 2010 as their survival blog writer. He still writes for the website three times a week, and each month publishes one photo gallery. The company that owns Outdoor Life also owns a book publishing company, and they reached out to MacWelch about the possibility of a book deal after being intrigued by his blog posts.

“They wanted it to be about disaster preparedness survival. But also in urban settings—all these different survival skills and concepts. Long story short, we started writing on the book,” he said. “We worked on the book from August-December 2013. I was able to use a bit of my blog content, but had to rework it to make it fit with the other material. I also write for other [publications], so it was a pretty tight schedule.”

He said the most challenging part about writing the book, which is set to hit shelves in May, was creating the illustrations. MacWelch said he would do “elementary” sketches that the book’s artists would then turn into really nice graphics. Despite the jam-packed schedule of teaching in the outdoors and writing for several publications, he’s already working on his second book. At the time of interview, he only had about 12 pages remaining to write.

As for the Prepare for Anything Survival Manual, “This book is about self-reliance, self-preservation, and self-sufficiency. They’re just things everyone ought to know. A way to provide for themselves, just in case they ever found themselves in an emergency situation. There could be a natural disaster, you never know.”

As for the most challenging situation he’s faced in the outdoors, MacWelch named cold weather as number one. He and a friend were on a survival camping trip in the Mid-Atlantic, which those in the field often do to hone their current skills and pick up new ones.

“It was an unseasonably cold weekend in November, and it got down to 14 degrees that night,” he recalled. “We just had the clothes on our backs. I built a shelter out of sticks and leaves and then heated up some stones near the fire, wrapping them up and putting them in the hut. I still just froze my ass off. My friend I was with, he actually made a nest out of hot rocks and slept by the fire. Cold is the worst thing that I’ve faced recently, but I’ve also been out in the desert in Nevada in really dry climates, as well as really swampy climates in Georgia and Florida.”

He said they’re all tough to deal with in their own way.

What does MacWelch consider to be the most imperative piece of equipment you must take on every trip, no matter how short it is? A fully-charged cell phone. Although it seems obvious, he said it’s something many people leave behind in order to explore the outdoors without distractions. Either that, or they bring it along but fail to charge it completely.

“This simple piece of gear is something that you should always have charged and in your pocket,” he advised. “For example, let’s say you’ve broken your ankle and you can’t walk out of the park […] at the end of the day, the number of hikers is dwindling. You get stuck out there. How are you going to signal for help? It becomes the greatest and best signal device. Never before in history have we been able to let people know from anywhere that, ‘Hey I need help.’ There’s no excuse to not have it.”