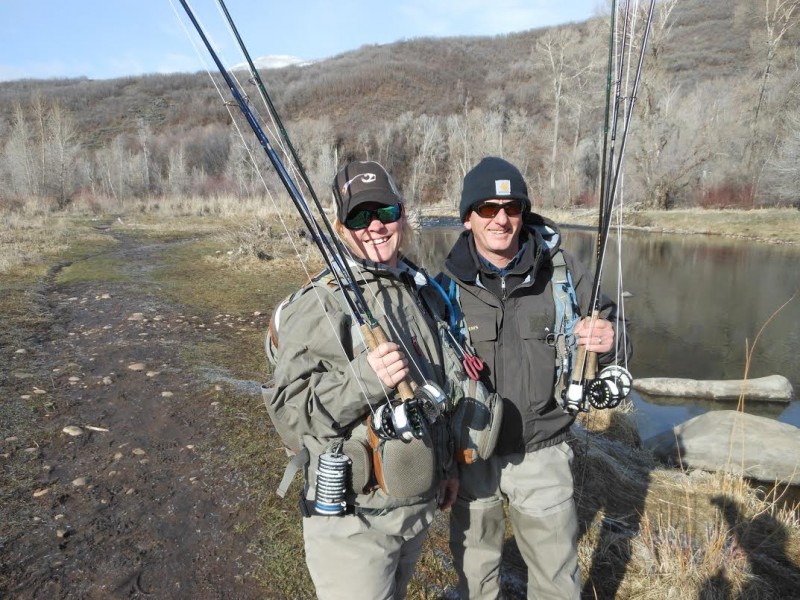 The sage stood still as the cry echoed by the bend in the Provo River.

Ken and Jen Mihal swiftly sprung into action as I quickly forgot nearly everything the husband and wife guides had taught me earlier in the day as my rod squirreled furiously from the hit at the end of the line.

“Let him run, let him run,” Ken says as I stand in the flowing river under the dramatic Utah sky, temperatures in the 40s, the sun sneaking in with spits of snow. “Give him line, give him line.”

I feed the line, the fish darting about.

“Keep that rod tip up,” Jen says as I do battle with what lies beneath.

Stripping line, feeding line. The minutes fly by and next thing there’s Jen with a net. The juju baetis fly proved too tantalizing for the 12-inch German brown trout with its colorful spots.

Gingerly, guide, angler, and fish pose for the obligatory photos.

“This is all about wearing him out,” says Jen.

Adrenalin flows through us, though the trout probably isn’t all that happy. But after the grip and grin session, the fish is returned to its home.

“The fish dictates everything,” says Ken.

On that splendid spring morning, four fly fishing neophytes plied the blue ribbon waters of the Provo under the guidance of the Park City pair and their guide service called Park City on the Fly. While skiers and snowboarders carved the copious spring snow, we drove maybe 20 minutes from the home of chairlifts to the Heber Valley with its snow-choked mountains and cottonwoods yearning to bud to try our novice skills against the home team trout.

Parking by the roadside, the Mihals provided foldable chairs and mats for us to change into waders and boots, while also providing us with fingerless gloves to ward against the morning chill.

Our one-day Utah fishing license on each of us, we made the five-minute march along the trail through the scrub to the edge of the wild water where even before we reached that stunning bend, Ken pointed out fish.

Jen Mihal hands off a German brown trout to the novice angler who landed it.

We were on the way to the middle of a 10-mile stretch of the Provo that flows through Heber City, flowing from the Jordanelle Reservoir to Deer Creek. The portion, Ken said, has 2,000-3,000 fish per mile.

The river has been restored in the past 10 years, and so have the river otters, as we saw one scamper along the water’s edge.

The Mihals have been guiding for about 12 years, and decided to open their own business a few years ago. They guide on other area rivers like the Weber, Strawberry, and Duchesne.

They live the ski town life, offering their guiding services year-round while supplementing their lifestyle as many outdoor lovers do with night work.

“I came out here 20 years ago and I was going to be a ski bum for a season until I picked up a fly rod,” says Ken. “That changed our lives.”

At the water’s edge, the Mihals schooled us on casting, reading the bobbing indicator and drifting along the lanes in the water before unleashing us into the chilly water with the alternating sandy and rocky bottoms.

Spread out, it didn’t take long before the cry of “fish on” pierced the air. Over the course of the morning, trout were caught and released. High fives were made, hoots of joy were shouted.

The Mihals moved us around in the water, helping us get those mends better so the indicator could be ahead of the line as the casts led to drifts down the water. That indicator gave false hope at times, a “hit” sometimes wasn’t a fish, but a rock.

If the hook got caught on a rock, the couple would fish it out or affix a different fly to the line as the morning went on.

“Drifting is the most natural flow you can give it,” says Jen as she guides me out to a piece of the river where others have had success. She provides instruction, allowing me to better dial in my amateur cast.

Of course, fish tales are also about the ones that got away. With every fish netted, there were ones that said, “Nope, just teasing y’all.”

I watched as my fellow angler yelled “fish on” and did respectable battle with a fish, rod bending furiously, stripping done gracefully, only for the rod to bend one more time and then be done.

“That was a good fight,” says Ken. “That was a big angry fish. You can’t land them all. You have to enjoy the fight.”

And also enjoy those riverside grip and grin sessions when the fishing goes your way.