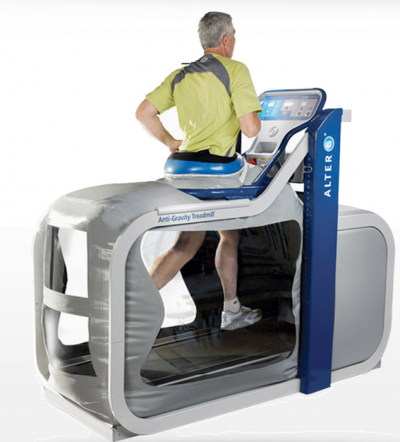 The AlterG Anti-Gravity Treadmill was originally designed by NASA scientists looking to create a product ideal for astronaut training. But the treadmill quickly spread to athletes in North America and Europe who were looking for assistance in training and rehabilitation. While professional athletes were some of the first users after NASA, the treadmill is now being incorporated into physical therapy clinics for everyday users.

The AlterG reduces gravity’s impact by offering users the selection of any weight between 20 to 100 percent of their body weight at one percent increments. It also allows users to rehabilitate lower extremity injuries with less pain and less impact; improve mobility, strength and safety for those with neurological conditions; provide a safe way to lose weight and exercise more intensively while unweighted; train without pain and reduce the stress to joints and muscles; and recover effectively and with less pain after training or competition.

According to Jess Smith from Outside PR, there are currently more than 1,200 AlterG treadmills in the United States, mainly in physical therapy clinics, rehabilitation centers, and professional sports training facilities. She said it’s likely we’ll see these treadmills in gyms in the future.

“[It’s] a game changer in physical therapy rehabilitation. Whether you’re a patient or an athlete dealing with lower body injuries, chronic pain or neurological conditions that inhibit mobility, you can benefit from the unweighting capabilities of the Anti-Gravity Treadmill,” the AlterG website reads.

While in the process of writing about the AlterG, I was able to visit Team Rehabilitation in Royal Oak, Michigan to give one of the treadmills a try. As someone who is active, but running is not my exercise of choice, I was apprehensive initially about running on the treadmill. After talking to Steve Scher—clinic director as well as a physical therapist for the Detroit Lions—who told me it would be a lot simpler than I imagined, I was a little more game to try the AlterG.

Scher was first introduced to the professional-sized treadmill several years ago through his work with the Lions, and that convinced him to bring the smaller version of the AlterG into Team Rehabilitation about a year ago.

“It allows the individual to either walk, run, or jog with a percentage of their body unloaded,” he said. “If you had ankle surgery, if you had knee surgery, if you had hip surgery—even if you’re a marathon runner or an Ironman competitor and you’ve got a chronic inflammation of some kind, you can also use it to run on to lessen the impact. A lot of marathon runners and long-distance runners don’t want to stop their training. This allows them to continue to train. Here, you get the same mechanics that you would if you were to run on a street, but not hurt yourself.”

When asked what percentage of someone’s body weight he unloads on their first time using the treadmill, he said it all depends on their athletic ability and what kind of rehabilitation or training they need. Some doctors will require the patient to do non-weight-bearing activities, or possibly only 25 percent weight-bearing, so Scher uses those as the guidelines for where to start people at. He said some doctors have even started to “prescribe” using the AlterG to patients.

In a TED Blog post by Brooke Borel, sports science journalist David Epstein said the following about the AlterG:

“You slip into a pressurized kind of bubble for your lower body, and you can adjust how much of your body weight this pressurized bubble carries. I first heard of that maybe a couple of years ago, only with really elite athletes, but I’m just started seeing it pop up in physical therapy clinics and also in a few gyms here and there. I think the price is starting to come down. If that price keeps coming down, that will be something that’s sort of more standard in gyms, because it’s really, really useful, especially for rehab.”

Check out the informational video below and find an AlterG to test out near you.