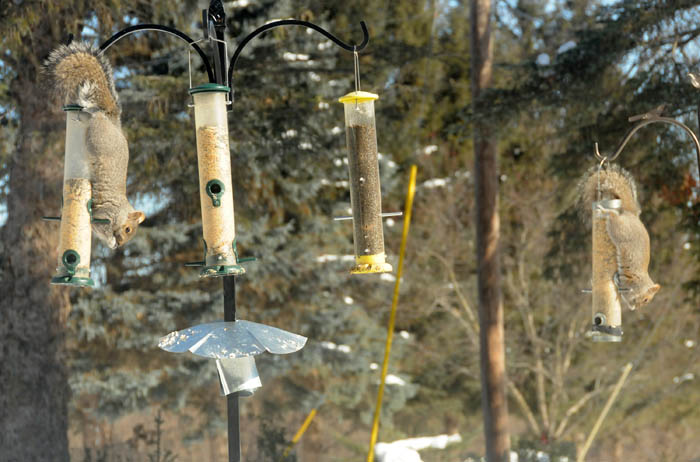 When squirrels horn in on bird feeders, birds keep their distance.

When pushing a new birdfeeder pole into the ground last summer, I forgot to keep it at least 10 feet from anything squirrels can use for launch pads.

This particular pole has four arms to hold birdfeeders, which puts one feeder six feet from our gazebo’s wooden railing. We’ve learned this winter that although six-foot leaps aren’t routine for gray squirrels, neither are they reserved for death-defying squirrel-athletes. Some squirrels casually curl atop the railing like sprinters coiling into starting blocks, and catapult across the chasm.

But unlike gymnasts dismounting from uneven bars, squirrels seldom “stick” their landings atop the birdfeeder’s metal pole. No, they usually ricochet off the pole or its arms, their tail and four feet flailing for balance and toe-holds. Then they right themselves, exclaim “Whew!” and study the feeders for “Today’s Special.”

Once they decide what to eat, they slip into gravity boots, hang upside down, and eat the same ol’ peanuts, sunflower seeds and other treats they had the last time they dropped by.

Maybe I’m getting ahead of myself. Until early January, we never saw a squirrel leap from the gazebo’s railing. During December, they simply climbed the square metal pole to reach the food. Because the climb was so easy, they hogged the feeders for hours, seemingly tag-teaming to keep birds away.

I blocked that route around Christmas by pop-riveting a stove-pipe cap to the post. For the next week or so, I smugly watched squirrels sitting on their haunches at the pole’s base. They’d stretch high, scratch their chins and mull how to defeat my sheet-metal shield.

Then they’d climb the pole to the shield’s base, study its construction and slide back down. After feeding a few minutes like lowly cottontails on the scraps dropped by finches, juncos, and sparrows, they’d feel humiliated enough to test and study the obstruction further.

Eventually, one of them took a fresh look and said: “Hey, look. With all the snow we’ve gotten this winter, the bottoms of those tube feeders are only three feet above us. I bet I can jump that high, grab a feeder’s base and swing up. Watch this!”

Seconds later, with toes wrapped around the tube’s hanger, the show-off was hanging upside down and gorging itself on my bird feed, just like old times.

A gray squirrel drops bird seed in favor of peanuts and sunflower seeds.

I fumed, of course. It was my turn to mull my options. After lunch the next day I grabbed a shovel and dug out all the hardened snow in an eight-foot circle around the pole. My excavation increased the gap between ground and feeders to 42 inches, which forced the squirrels back onto their haunches to contemplate their next move.

I’ve read that squirrels can jump four to five feet vertically, and I’m sure that’s true for athletically gifted or highly motivated squirrels in warm climates. My squirrels are neither. I’ve yet to see one make the 42-inch vertical leap since shoveling away the snowy buildup.

Still, I never declared victory. Sometime after New Year’s Day I looked out and saw the gang of squirrels scheming again. I swear one of them pointed and said: “Hey look! That mope put a gazebo over there, and its railing is the same height as our food. I bet it’s only six feet from the feeders. I can jump that. Watch this!”

And then it leaped onto the gazebo, scrambled atop the railing, gauged the abyss, and launched itself like Evel Kneivel to the feeders.

“It didn’t even need a running start,” I muttered.

But I noticed something in recent days: I swear there’s only one or two squirrels from the neighborhood mob that takes that leap. The one up there most has ear tips that are distinctly more blond than most, and we seldom see our black-phase squirrels up there.

To prove my suspicions, I wish I could trap and attach numbered ear tags to every squirrel visiting our yard. “Oh look. Number 12 wants to jump. But he’s too chubby. Get the camera. This should be good.”

Again, “the book” says squirrels can leap eight to 10 feet between objects, but I doubt every squirrel springs such distances; at least not from a stationary start, and with other food within easier reach.

I should explain the previous sentence. See, my wife and I aren’t prejudiced against squirrels. Some of our best friends resemble squirrels. In fact, some of my adoring readers claim I’m one. Either way, we’ve learned in the past few days that keeping two nearby feeders accessible to squirrels usually keeps them off those nearest our windows, which gives birds a relaxing area to feed.

I gained that fresh perspective on squirrels in November while visiting Kay “The Bird Lady” Kavanagh and her husband, Bob, at their home near Aurora in Florence County. It just took me two months to try it. The Kavanaghs maintain an impressive array of bird feeders, and an impervious defense system to foil squirrels, raccoons, and black bears.

Sleeves of bright stove pipe surround the posts and tree trunks that hold the Kavanagh’s feeders, and a taut rope between two trees suspends several feeders high above the ground. To ensure squirrels can’t run that rope to reach the birdfeeders, the Kavanaghs cut holes in the base of several plastic bottles and strung them like spinning pearls on the rope between the trees and the feeders.

“Won’t the squirrels eventually just chew through the rope to drop the feeders?”

Pfft! The Kavanaghs are birding professionals. They know how to play this game.

“We just pay them a ransom,” Bob said. “I built them a little platform feeder off to the side, and keep it filled. If they find easy food, they don’t cause destruction. It’s easier than fighting them all the time.”

Even though I’ve learned it’s not 100 percent foolproof, it’s a sensible approach; kind of like the flower girl sliding a daisy into the soldier’s rifle muzzle. Still, I don’t recommend that everyone pay the squirrels’ ransom. Judging by email from some backyard birdwatchers I hear from, they enjoy battling squirrels.

Sigh. I try not to judge. This world can be so perverse.