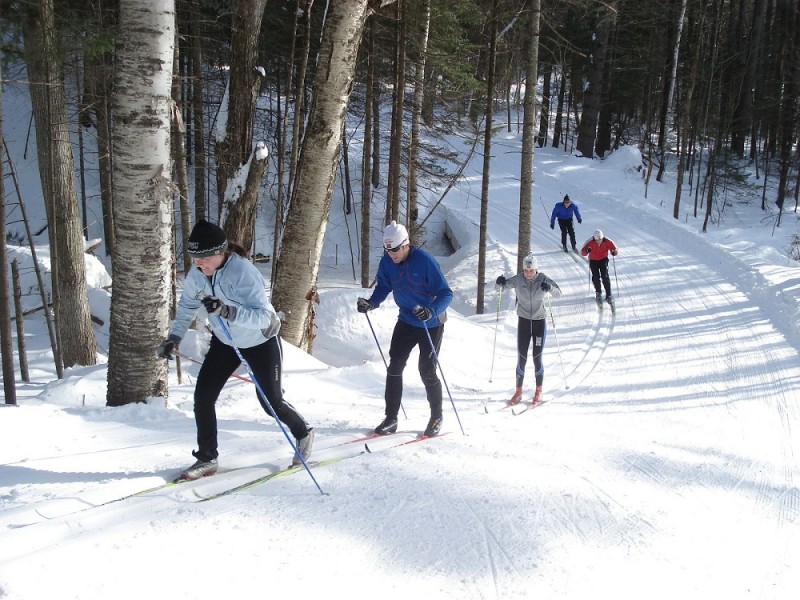 Sometimes it's just about getting outside. Image courtesy Jackson Ski Touring Foundation.

It was a day initially thought to be better off with a start indoors at the gym, followed by a spot in front of the TV watching sports while the wood stove radiated its welcome warmth and the glorious refrigerator held a court of leftovers destined for the microwave.

The thermometer read an evil minus 24 in the hostile darkness of morning, and even as the friendly sun and mercury rose, the promised high for the day was only in the upper teens.

But often a commitment is made to a buddy to get outside to ski on a weekend. So instead of going nowhere on the elliptical, I was on laughably outdated cross-country skis in single-digit temps and shuffling over wintry well-groomed trails in the highlands of Jackson, New Hampshire.

Frankly, it had been some time. The promise of cross-country skiing is always easier than the act, as I readily grow accustomed to the alpine chairlift long before the Nordic trails open.

And though there is much beauty found along the way of manicured alpine boulevards, the experience of nature always seems magnified on free-heel skis; the pace is slower, and the breath more labored. The narrow trails seem more fitting to the forest than a super-wide cruiser, the pathways reflecting the nuances of the woods with its ridges, hills, saddles, and valleys.

They are also pathways where a couple of pokey skiers on wax-less boards can plod along and perspire, side by side, with one in the tracks and one in the skate lane on the finely-manicured snow.

The temperature in the late morning approached three degrees under mostly sunny skies.

There really wasn’t much of a plan as to which trails to ski, but this didn’t matter—just being outside in the frigid yet invigorating air was enough. Cold is always relative and the vast majority of my relatives would never venture out in such extremes, but dressing smartly and practically in layers with extra clothing, with a map, first aid,  food, and water handy in a backpack proved sturdy enough against winter’s assault.

The snow sparkled in the sun and a listless wind was much appreciated. The sun meant warmth and when in it, the single-digit temperatures mattered not. But stop in the shade for a rest after another herringbone up a hill and one would feel the sting of winter.

Small animal prints snaked across the groomed ways and among trees and brush. Snowshoe trails fed off the groomed ways. Sitzmarks held untold stories that everyone knows contains at least one fall. A narrow ungroomed trail wiggled along dips and brook crossings while the groomed pathways wound by a ramshackle cabin and a prim weathered one with faux flowers in a window box, perhaps a bit of backcountry wit and humor.

Chatting along in the snow with no particular way to go, mileage wasn’t tallied. Instead, time was eyed, and after a few more strides in the woods, it was decided to turn around and enjoy the largely skinny ski downhill—not done with precision or grace, but with a zest and a prayer. On the return, I more fully realized the frosty mountains standing above the trees always out in the chill and snows of winter with no places to hide.

How exhilarating are the cold woods of winter followed by a microwaved feast in the glowing warmth of home, sitting in front of the television watching hoops in late afternoon.