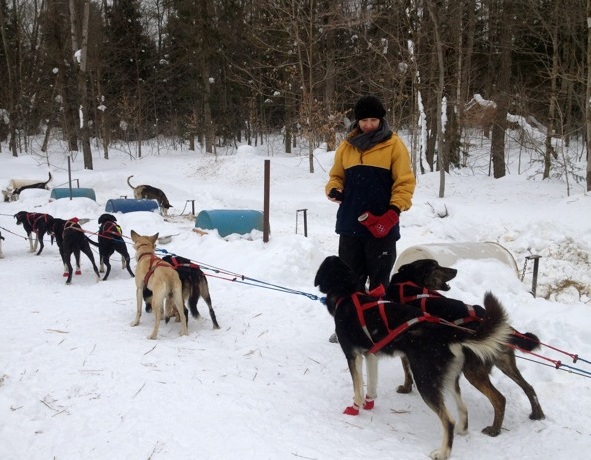 ‘Tis the season for sled dog races. With the Iditarod finishing earlier this month, and many snowy states hosting their own races, more and more people have become curious to try this on their own. But who is going to buy, raise, and train a dozen dogs just to see what it’s like?

Luckily, there’s a way to try dog sledding without making the commitment of having your own kennel. Some mushers who race professionally or simply run for fun have created a place that allows visitors to meet the dogs, harness up a team, and take their turn at driving a sled through the snowy trails.

I was fortunate to get to try the sport myself in McMillan, Michigan at Nature’s Kennel Sled Dog Racing and Adventures. Nature’s Kennel is owned by a husband and wife team, Ed and Tasha Stielstra, who each participate in races around the world. Ed has raced the Iditarod seven times, and Tasha, who now trains their dogs, took first place in the UP 200 in 2006.

Upon arriving at Nature’s Kennel, our group was greeted by three young guides: Dave, TJ, and Jasmine. They were about to show us the way of the sled dog world.

When we entered the yard where the Alaskan huskies slept, I couldn’t believe how many dogs there were—at least a hundred! They all had their plastic barrel house, chain, dish, and name plate.

“All the blue barrels are females, and the white barrels are males,” Dave told us as we approached a long section of barrels. As the dogs heard us talking, they slowly emerged, stretched, yawned, and looked cute so we would pet them. Once TJ started explaining the anatomy of the sled, the dogs started to hop around and yip, hoping to go for a run.

The sled was basic, but pivotal. We learned how to stop incrementally with three different types of brakes: the drag pad, the center brake, and the hook. The latter also keeps the musher from being pulled away before he/she is ready to take off. Braking is important because yelling, “Woah! Woah!” doesn’t always work with a team of revved-up pups. Those dogs are strong. They want to run. My stomach worked into a knot.

Dogs at Nature’s Kennel Sled Dog Racing and Adventures in McMillan, Michigan stretch out of their kennels.

The guides showed us how to harness the dogs to the sled line. It looked easy enough, but then TJ announced, “Okay. Pick up a harness, look at the name, find the dog, and harness it up.”

I wasn’t quite ready for that, but I did it. Walking down the row of dogs was like walking into a kindergarten class and asking who wants ice cream. The dogs all displayed, “Pick me! Pick me!” in their own unique way. But if their name wasn’t on the harness in my hand, I couldn’t pick them.

Since they wanted so badly to be chosen, they also made it surprisingly easy to harness up. They lifted their front paws just right so we could put them through the loops.

With four teams harnessed up, the noise was taken to a new level. From yawning to yipping, we were now up to howling, barking, and other indescribable sounds. The dogs on the harness were the noisiest, while those still chained up yipped in envy.

Well, we were ready to go, and, “What? I’m driving first?” My stomach’s knot pulled a little tighter. I looked at the five howling, tugging dogs on the front of the sled. “It’s going to be okay,” I told myself. “I have to be in control of them. Remember the braking methods, and just hang on to the sled.”

I placed one foot on the hook and the other on the center brake. They were my only two hopes for staying in place when I got detached from the pole by a rope. “Ready?” TJ yelled. I patted my head to confirm the ready signal. My stomach turned again. The gentleman behind me detached my sled from the pole, and I pulled the hook out of the ground as it began to drag through the snow.

The silence instantly transformed into a rhythm of panting canines and my drag pad shooshing through the snow. I had to stand on it most of the time, so my team didn’t pile up on TJ’s team. We meandered down the trail through pine trees, gentle turns, up and down hills, and through some open areas. I couldn’t believe how magical it was.

The knot in my stomach untied, and I wished my turn would never end. Shifting my weight through the turns became second nature. And as long as I kept enough room between my team and the sled in front of me, we were doing great.

My experience is similar to most of the first-timers I’ve run into, no matter which adventure kennel I was at. “I’m so nervous to drive!” they say. And I reply, “Good. Then you’ll be even more surprised when you see how much you love it.”

And they always do.