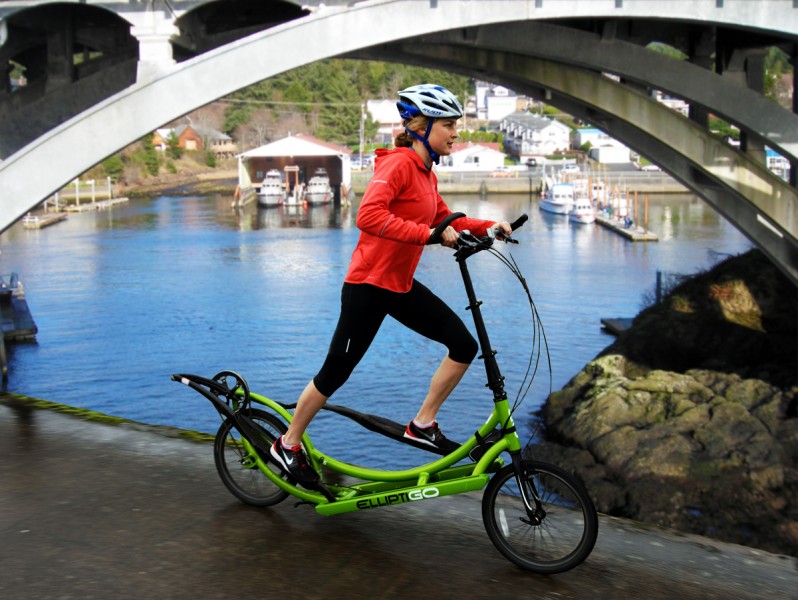 The ElliptiGo comes in three versions that were created for specific terrains.

Bryan Pate, co-creator and CEO of the ElliptiGo, had always been an avid runner. For most of his life he participated in marathons and other long-distance running events. But in 2005, his running career came to a drastic halt after he suffered a hip and knee injury.

“My doctor told me I was done,” he said. “I had to switch to low-impact exercises or else,” Pate said.

He tried cycling, but said he found it to be a less satisfying, more uncomfortable alternative. Using the Elliptical at the gym more closely replicated running, but Pate was equally frustrated with the long wait to use a machine as well as its inability to be used outdoors. After months of unhappiness with his new workout arrangements, he approached his friend Brent Peal, a mechanical engineer, about creating a device that simulated running, similar to an elliptical trainer, but that could be ridden outside.

The road to creating such a device was tougher than the team anticipated because nothing like it had ever been attempted. Five prototypes helped shape the current ElliptiGo models. The first one, Alpha, was very practical. Built with the intent of experimentation, Alpha was stable with multiple adjustment possibilities, but it was also bulky and slow. The second generation, Beta, had improved angles and configurations but size was still an issue. It wasn’t until the third prototype, which was built of aluminum instead of steel, making it lighter and more compact, that the current ElliptiGo really took shape. It was this model that Pate used to compete in a 50-mile bike race from Rosarita to Ensenda, which proved they had a revolutionary idea on their hands.

With only a few more adjustments to make it easier to manufacture and assemble, the current ElliptiGo was born. There are three versions to choose from. The simplest, the 3C, only has three gears and less grips, making it best for flat terrains. The next step up is the HC, which offers eight gears and is better equipped for climbing. The HR is the ElliptiGo’s most tricked out version. Not only does it boast 11 speeds and easily positioned carbon drive arms, it also is four pounds lighter with a folding center column, making transport a cinch.

ElliptiGo users have competed in cycling events as well as ElliptiGo competitions across the globe.

No matter what model you choose though, the ElliptiGo is made to accommodate riders from 5’4″ to 6’10″ straight out of the box. A standard wrench can easily shorten the stride length, but Bryan insists that, no matter the height difference, most couples can share an ElliptiGo without making any modifications.

All models somewhat resemble a classic Elliptical but, after spending some time on it, there are basic differences that riders encounter. The most obvious difference and benefit is that no longer are you confined to the four walls of your local gym or home workout room. The ElliptiGo also requires 33 percent more effort than a road bike, according to a study conducted by EPARC at the University of San Diego, making it a more efficient and time-effective workout.

“A road bike is focused on transportation. That’s why it was created,” Pate said. “The ElliptiGo’s main purpose was for exercise, though it can get you where you want to go too.”

The true drive behind the product was to replicate running, and it delivers with surprising accuracy. The long stride length and the minimal coasting ability mirror classic running motions and simulate the feel of a run, requiring riders to constantly work.

Greg Weeks, an employee of American Home Fitness in Birmingham, MI, has owned an ElliptiGo since they were first released to the public in 2010.

“I am a runner, but as I get older it is harder on my body,” he said. “But if I can get out and run, no one wants to be confined to the indoors, even if it is better for you. I haven’t had any problems getting used to it [the ElliptiGo]. It’s so much better on my knees, and so nice to be outside instead of stuck in my basement.”

The popularity of the new product is really what is getting it noticed. Not only has it been ridden in classic riding events, like the London to Edinburgh bike race, but a new, separate community of competitors is forming around the product as well. This year, the fourth annual ElliptiGo Championship will take place in October, with a race up California’s Mount Palomar.

“We are also expanding overseas. We are hoping to hold a time trail in Ireland as well as a European racing event,” Pate said. “We think that this category can be as big as a mountain bike.”

But whether or not it achieves public success, Pate said he could not be happier with the end result.

“It is exactly what I envisioned,” he said. “I haven’t been to the gym in years and it has solved my problem of wanting to run outside for the rest of my life.”

Users of the ElliptiGo seem to agree with Pate’s sentiments, as he has received thousands of thank you notes from long-time runners who had to give up the sport because of injuries.

“It is sad to hear the stories, but it’s really satisfying to think that we have had such an amazing impact in a way that I never anticipated,” he said.

Visit the website to test ride the ElliptiGo at a location near you.