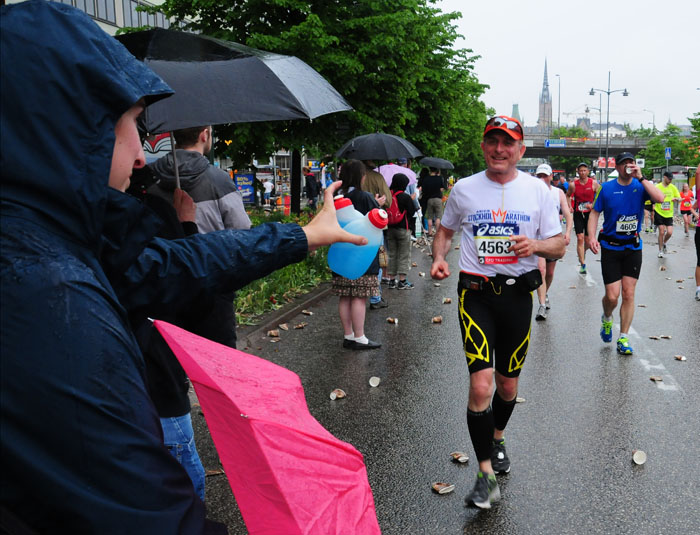 The author coasts in to pick up full sports-drink bottles from his daughter Leah at Kilometer 37 of the Stockholm Marathon.

My friend Tom Heberlein doesn’t tap his toe when awaiting replies. He has no patience for subtlety.

Therefore, I wasn’t surprised by his email in early May: “I realize you’re worthless as a trip-planner, so I’ll make it simple: What do you want to see when you’re in Stockholm?”

“The finish line,” I replied. “I’ll ask Penny about everything else. She’ll email you.”

The 35th running of the Asics Stockholm Marathon was a month away when Heberlein and I exchanged those notes. Nearly a year had passed since I registered for the June 1 race, paid the $100 registration, and told him my wife, Penny, and I would be visiting him and his wife, Betty, who live much of each year in Stockholm, Sweden. We also hoped our daughter, Leah, a Navy nurse in Naples, Italy, could join us.

If you like to pressure yourself, tell friends and family you registered to run a marathon. That might impress them, even if they don’t know it’s 26.2 miles (roughly 42 kilometers). But if you don’t show on race day, they’ll belittle you, secretly or worse. To increase the pressure, register for a marathon on the far side of the nearest ocean, complete with passports, airline tickets, travel schedules, and other people’s vacation time. If you don’t toe that starting line, expect mockery.

Still, there’s no denying stubborn marathon facts. More than 20 percent of registered runners don’t run the race, and they aren’t just first-timers failing New Year resolutions. An abdominal tear kept me from running what would have been my seventh marathon in October 2012, and cost me the $95 registration fee.

When that injury healed around Thanksgiving, I trained more carefully than ever the next six months to ensure I could run Stockholm. As it turns out, this year’s Stockholm Marathon registered 21,718 runners, and nearly 5,000 didn’t show. Everything I did was aimed at being among the 77 percent who would pack Stockholm’s race corrals on a wide street called Lidingövägen.

Even so, many runners start but don’t finish marathons. At this year’s race, seven percent (1,072 runners) of those present for the noon start didn’t reach the finish line. Plus, Stockholm’s marathon ends on a track inside its famous stadium, which was built for the 1912 Summer Olympic Games. Talk about compound disappointment!

The author, far right, with his “support team” of Tom Heberlein; the author’s wife, Penny, and their daughter Leah.

Besides fretting for 12 months that I wouldn’t finish the race in front of my wife, daughter, the Heberleins and thousands of cheering Swedes, I worried what Jim Thorpe’s ghost would think. This is where Thorpe shocked the world at those 1912 Games with one of sport’s most impressive and enduring feats. Thorpe, a Fox and Sac Indian, won the Olympic decathlon and pentathlon by taking first place in nine of the 15 events that made up those competitions.

And so with fear of history and humiliation driving me on race day, I felt like America’s goodwill ambassador while riding Stockholm’s subway with my family, friends, and hundreds of runners, most of them Swedes. First I chatted up a runner seated across from me after noticing we shared a first name: me, Patrick; him, Patrik. When he jumped off at the next stop, I asked the runner beside me about his intricately taped knee. He said it tends to flare up after 20 kilometers (12.4 miles), and hoped the tape would help.

About an hour later, I joined the other 16,754 runners waiting in our assigned corrals for the start. I quit pestering my fellow runners. Focus. Runners must focus.

As I stretched and made room for more runners in Corral D, I tried to remember where I’d meet Heberlein, Betty, Penny, and Leah along the route. Using my estimated pace of 5.5-minute kilometers as his guide–and my intention to finish a sport-drink bottle every five kilometers–Heberlein plotted how to ride Stockholm’s subway (the “Tunnelbana,” or “T-bana,” for short) to reach our rendezvous points to refill my empties. More pressure. If I didn’t maintain my pace, I’d derail Heberlein’s schedule.

I nodded and asked: “Where is that in relation to our hotel?”

Heberlein shook his head impatiently. “Sheesh, Durkin! It’s still where it was the first three times you asked,” he half-shouted. “City Hall is that big building across the lake from your boat-hotel, you mope.”

We also agreed to meet about Kilometer 17 along Valhallavägen, a pretty, shaded boulevard. “After that, you’ll be on your own awhile,” Heberlein continued. “That’s just before you start the loop around Kaknästornet at Gärdet, and then around Djurgärden. Remember those parks two nights ago? We missed the first bus on our way out of Djurgärden because you didn’t run fast enough to catch it and make the driver wait for us.”

The author starts out on the 42.2-kilometer (26.2 miles) Asics Stockholm Marathon on June 1 in Sweden.

As the countdown to the noon start began, my adrenaline surged. I don’t remember the starting signal, but I recall the goose bumps when the spectators roared far up the street. Soon after, the runners ahead rolled forward like a shore-bound wave, bounced back as if hitting a cliff, and then surged once more, pulling me along in the current.

We were off! If everything went as planned, I’d be circling the Olympic stadium track in four hours, pretending to race Jim Thorpe to the finish line. Only 42.2 kilometers to go!

As I approached the starting gate where the elite runners raced off minutes earlier, I saw massed spectators lining Lidingövägen. Everyone seemed to be clapping and yelling “Hey-Ya! Hey-Ya! Hey-Ya!” Later, Heberlein told me they were actually yelling “Heja! Heja! Heja!” which means “Come on! Atta boy! (or girl) Bravo! Rah!”

Never before had I seen such crowds, and they barely thinned as we turned left onto Valhallavägen and settled in for the long run. At about Kilometer 3 along Strandvägen, a woman waved, smiled, pointed at my race bib, and shouted, “USA! USA! USA!” How did she know…Then I remembered each race bib included your first name and a picture of your country’s flag. I raised my arms, thumbs up, to thank her.

At about Kilometer 6 along Sodermälarstrand, I passed the LogInn Hotel, the boat-hotel where I was sharing a one-porthole room with Penny and Leah. As Heberlein promised, City Hall stood tall across Lake Riddarfjärden. As I reached Kilometer 8, I stared up at the Västerbron bridge on the lake’s western end. Some runners were walking the bridge’s nearly 100-foot ascent, reserving their strength for their second trip across the bridge in 25 kilometers.

I trotted to its peak, figuring I could walk it on my return lap. I finished my second 10-ounce sports-drink bottles while descending Västerbron’s backside. My team would be waiting 1.5 kilometers ahead.

Heja! Heja! Heja! Heberlein waved from the curb, standing out in his red Wisconsin Badger hat and coat. I handed him my empties as he yelled, “You’re doing great! Right on time! Keep it up!” He slapped my shoulder as I trotted off. I spotted Leah waving and cheering when I rounded the corner, and then Penny snapping photos. Betty had returned home to work.

Soon after Kilometer 16, I passed the Olympic Stadium and wondered how I’d feel in 25 kilometers when nearing the finish line. I started my second trip down Valhallavägen. Heberlein, Penny, and Leah would be somewhere around Kilometer 17.

Heja! Heja! Heja! My team flagged me down and I coasted over for my refills. “See you after Djurgärden,” Heberlein called as I ran off.

Ten miles were now behind me. I felt strong. I don’t own a running watch so I didn’t know my exact pace. My goal was to finish in less than four hours, about what I averaged on good days at previous marathons.

Heja! Heja! Heja! As I neared the halfway point at Kilometer 21.1, runners around me mugged, skipped, and danced for photographers overhead on metal scaffolding. A Finnish runner beside me smirked and muttered in English: “Still much race to run.” We chugged on, our smirks our only risk of wasted energy through premature celebration.

We were now about two kilometers inside Gärdet. The spectators were gone and wouldn’t return for about seven kilometers. The skies were darkening, and occasionally spitting mist.

The author nears the end of the Stockholm Marathon in Olympic Stadium, barely able to keep his eyes open in the steady downpour.

Heja! Heja! Heja! After crossing a small bridge and turning left onto Strandvägen, I spotted Heberlein, Penny and Leah waving at Kilometer 28. I passed them my empties, but nearly fumbled the exchange. Was I tiring, possibly losing coordination?

As I began my second lap around Stockholm’s center, the skies shed a steady drizzle that soaked my shirt, pasting it to my shoulders and upper arms. I trotted once more down Skeppsbron, right onto Sodermälarstrand and again passed the LogInn Hotel. More runners were tiring and veering off to walk.

Heja! Heja! Heja! The crowds cheered us up the Västerbron bridge a second time at Kilometer 33. “Dig deep,” I told myself. “Keep running.” I crested the bridge and started down. A stout woman ahead held a hand high, looking to smack high-fives. Several runners ignored her. She looked disappointed. I caught her eye and thrust my right arm high as she yelled “Heja! Heja! Heja!” and slapped my palm. The impact nearly spun me on my axis. “Sheesh!” I said loudly, drawing smiles from nearby runners.

As I neared the bridge’s base and turned onto Norrmälarstrand, both shins began cramping. The Västerbron’s downward run had stressed my lower legs, causing a slight limp. Then the road flattened and by Kilometer 36 my shins relaxed.

Heja! Heja! Heja! I passed City Hall again. The rain fell steadily by Kilometer 37, thinning the crowds but sprouting umbrellas and hoods among the stalwarts. Leah, Penny, and Heberlein motioned me over, waving my refilled bottles. “Just one,” I gasped. “I just need one.”

Five kilometers doesn’t sound like much in a 42.2-kilometer race, until you convert it to 3.1 miles. Besides, now it was pouring.

Heja! Heja! Heja! Finally, I turned left on Valhallavägen and saw the Olympic Stadium. But I wasn’t there. I first had to run about a block up the big boulevard and then right for another block before reaching the stadium’s rear entrance.

And then I was there, trotting onto the stadium’s track as the crowd cheered relentlessly. I tried imagining what Jim Thorpe felt more than 100 years earlier. How does it feel to prove you’re without athletic peer at an Olympics? Mid-packers and mere finishers like me can’t conceive such prowess. All I could do was push toward the finish line. I envied the runners who swerved back and forth down the backstretch like kids pretending to fly. I barely had the energy to keep my eyes open against the rain.

The finish line drew near. I pumped both arms skyward, happy, proud–and relieved. And then it was over. “Heja! Heja! Heja!” I yelled, and squished to a stiff walk.

I not only saw the finish line, I crossed it in 4:04:05. Maybe Jim Thorpe wouldn’t be impressed, but maybe he would have cheered the effort, just as Leah, Penny, and Heberlein were now doing.