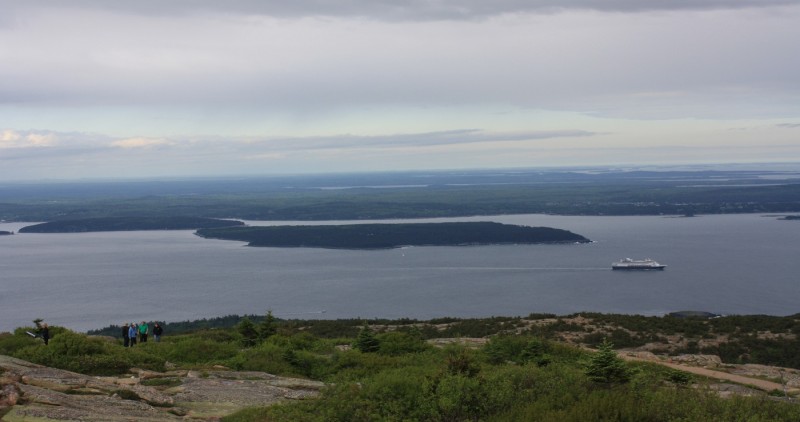 Cadillac Mountain isn’t the highest mountain in Maine but it has to be the most visited.

Standing at a mere 1,530 feet, Cadillac is located in a most stunning piece of the Pine Tree State—Acadia National Park. The mountain is the first place in the country to watch a sunrise during select months and is the highest point on the North Atlantic seaboard.

It is where the mountains meet the sea.

Not only do visitors hike up Cadillac with its outstanding vistas from mountains to sea, they can also drive up along the auto road–making the summit a very happening place in the heart of summer.

The park is absolutely stunning. Plan on taking a few days to explore. Hiking, with 125 miles of trails, is but one activity. Walkers and cyclists enjoy the splendid carriage roads financed by philanthropist and equestrian John D. Rockefeller, Jr., who constructed motor free pathways for his enjoyment. The terribly scenic Park Loop Road attracts motorists and cyclists who should know it’s narrow, winding, and often crowded. Rock climbers scale seaside cliffs. Birders look for shore birds and of course the popular nesting peregrine falcons on the Precipice in spring and summer. There’s also, swimming, boating, fishing, and more.

The first national park east of the Mississippi River, Acadia encompasses a vast 49,000 acres or so with some 36,000 owned by the National Park Service and thousands of acres of privately-owned lands under conservation easements managed by the park service.

With its scenic ridge lines, cliffs, coastal landscape, and footpaths, Acadia is one of the most-visited U.S. parks, with about two million visitors annually.

Most of the park is on Mount Desert Island, once part of the mainland. Explorer Samuel de Champlain journeyed along the coast in 1604 and is credited with naming the island.

But it wasn’t until about 200 years later that the island was discovered again, this time by summer residents able to anchor their stately small ships in the harbor and then stay in their even statelier cottages that were more like mansions.

From the top of pink granite Cadillac it’s easy to see the ideal of the maritime and mountain landscape. Get there via the Cadillac North Ridge Trail on the peak’s north side with stunning vistas to Bar Harbor, Frenchman Bay, Eagle Lake and 1,265-foot Dorr Mountain, the second-highest peak in the park, and named after the “Father of Acadia,” George Dorr, who was noted for his passion and vision.

The trail doesn’t offer much protection from the elements and generally climbs rather steadily. From portions of granite to whimsical stretches through the spruce and pine woods, the trail doesn’t skimp on views. It doesn’t take long for the vistas to show up to Bar Harbor, long Eagle Lake in the west and Cadillac up ahead.

The trail really isn’t very far from the 3.5-mile long auto road, staying to its east.

The easy-to-follow way also contains cairns the higher one progresses. They too become part of the landscape, often looking magical. But they are there for a reason. They are instrumental markers should fog roll in and obscure the way.

Near the summit, the terrain features resilient trees and ledges. Image by Jan Duprey.

The top is almost reached when steps are underfoot.

Spend some time at the summit. Cadillac, called Green Mountain until 1918 and then changed to honor the French explorer Antonie de La Mothe Cadillac, is not a place for solitude but at times it is found there. Yes, an auto road means hikers will be sharing the summit with those who have motored there, but the top of the ledgy mountain is a wonderful place with 360-degree views (and the gift shop with cold beverages and much appreciated rest rooms). The top also contains resilient vegetation that must contend with strong winds and freezing temperatures to survive. Given the mountain’s view, it was a prime spot for a hotel that stood for a spell in the late 1800s, only to succumb to fire. A cog railway also once graced its summit.

But after poking around the summit with its salty landscape, it’s time to return the same way and there’s where the solitude is often found, among the rocks, the cairns and the trees.

Oh, and the wind, that can carry all away with a gust.