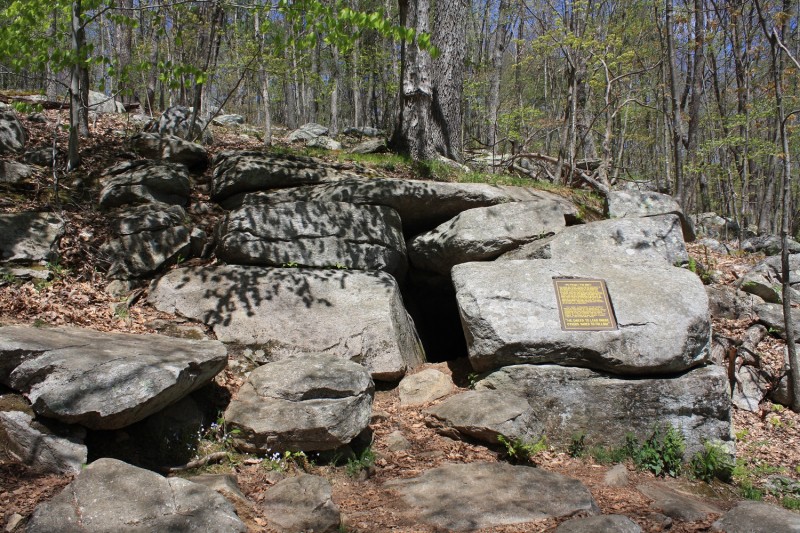 The Wolf Den in Pomfret, Connecticut's Mashamoquet Brook State Park is one of several interesting rock formations along a four-mile loop hike.

The rock formations are outstanding.

Sit in the stillness of the woods on a stone throne called Indian Chair. Stop for a rest and nosh on a huge slab named Table Rock.

And wonder at the torch-carrying, musket-shooting Israel Putnam who in 1742 felled the last wolf in Connecticut—one known for preying on local farm animals —in a cave called the Wolf Den.

Connecticut isn’t exactly a mountainous hikers’ kingdom, but there are more than leg-stretchers in the Nutmeg State for those looking for a break from the monotony of the interstates leading between home and destination.

The state’s bucolic Quiet Corner sits in its northeast patch. It is a genteel place, one of farm and field, stately homes, quaint inns, antiques, and equestrians. State parks serve up hiking trails and one jewel in the treasure chest is the 1,000-acre Mashamoquet Brook State Park and the four-mile Wolf Den loop.

The park’s location was once the dominion of Mohegan Chief Uncas, better known in modern society as a place to play the slots and more. Mashamoquet is a Native American term manning “stream of good fishing.” At one time three state parks took up the acreage, but officials combined the original Mashamoquet, Wolf Den (protected by the Daughters of the American Revolution back in 1899) and Saptree Run into one bigger park.

Readily marked and simple to follow, the blue-square marked route takes hikers through stone walls, by lots of rock outcrops and is very forgiving after asking for some effort up and down an initial stretch of hilly terrain.

And you thought Connecticut was flat, right?

The beauty of this state park is that there’s no admission charge this time of year, but there is a parking charge on weekends and holidays from Memorial Day through Labor Day.

With southern New England’s beginning bursts of color and greenery, my wandering walker Jan and I were dazzled by the budding barge of blush.

The journey began from the parking area not far from U.S. Route 44 behind an office building where signs point to the left. The way is initially grassy before another sign indicates it’s time to head up into the woods.

Stone walls and rock formations are frequent companions during that initial mile and a half. There are many places to stop to take a look at the various rock piles and ledges with their quirky shapes. The trail does have some bite to it as it winds over the hilly terrain passing over bridges and through a swampy area bursting with various vegetation.

Scampering up a hillside, look for the Indian Chair at about a mile. It’s a fine spot for photographs (just watch the ledge). No doubt the kids will love having their pictures taken sitting in the stone throne. The way continues up to the Wolf Den in about a third of a mile (the Blue Trail merges with the Red Trail to become the Blue Red Trail for a spell). Do note that in the seven-mile network of trails here, the red trails lead back to Wolf Den Drive and by traveling east can get back to the parking area for those who may want to cut the hike short.

The Wolf Den is another fun spot along the way. A cave-side plaque tells the story of “Putnam and The Wolf.” In what must have been quite the headline for its time, the torch-carrying Putnam with a rope tied to his feet entered the cave with his musket. There “and by the light of her angry eyes, shot and killed the marauder.” He then “dragged forth the body of the last wolf in Connecticut.” That last piece of information may not much Putnam a hero in animal activists eyes.

Nonetheless, onward the path leads to another easy found landmark, Table Rock, a huge slab perfect for a rest, reflection, and nourishment.

Onward from Table Rock, the trail soon crosses Wolf Den roads and becomes a leisurely stroll of sorts down the hillside. Dally a bit by a field and take note of the lovely ferns in the woods as well. The trail soon leads over a bridge before coming to a junction where sticking to blue is the thing to do.

Eventually the way continues through more stone walls, integral reminders of the early settlers in a splendid slice of New England.

Just be sure you wear your good hiking clothes when you go.