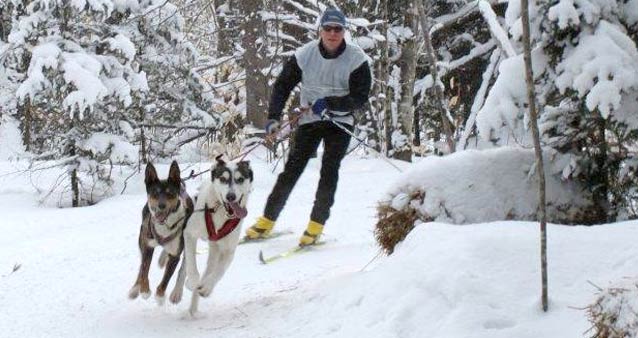 Skijoring--a unique sport that comes across as a combination of cross-country skiing and dog sled racing--in action in the U.P.

“I felt weightless, like I was flying” gushed Nikki Dewald as she snowplowed to a stop. “That was amazing. Totally effortless. Just me and Yourick under the stars, sailing over the snow. I didn’t even need a headlamp.”

Even in the dark it’s clear from the excitement in Nikki’s voice on this crisp January night that skijoring with her best buddy, Yourick, a long-legged, wire-haired, 90-pound white German Shepherd/poodle mix, has etched a new memory in her winter scrapbook.

Nikki grew up a skier in Traverse City. Combined with her love for horses and dogs, she was a natural when she started skijoring three years ago. Now, with her friend Lindsay Demers, another skier/dog lover, they’ve organized the Noquemanon Skijoring Club, meeting weekly during the winter at Marquette’s Forestville trailhead.

The Noquemanon Skijoring Club is three years old but the sport is not new. Skijoring comes from the Norwegian word for “ski driving,” with roots in Scandinavia. In 1928, it qualified as a demonstration sport at the second Winter Olympics in St. Moritz, Switzerland. Rather than skiing behind dogs, however, they used horses.

Equipment hasn’t changed much, basically because the set up is so simple. Most often skijoring is on a groomed track. Skiers use shorter, more nimble freestyle or skate gear and wear a waist belt with leg loo

ps, like a climbing harness. A quick release attaches the line–with shock-absorbing bungee–from the belt to the dog’s harness, which stretches down the length of the dog’s back with a loop at the tail end.

For the first meeting of the year, 10 skiers showed up with their dogs. Some had a few years of experience, but it was the first time for Ron Thorley and his honey-colored Vizsla/Lab, Karhu. They were the last to finish the 12-kilometer loop but considering it was their maiden glide, the trip was more than a success.

“It was a riot,” says Ron, more breathless from adrenalin than exertion. “I was totally amazed. Karhu seemed to pull naturally and not only that, he seemed to understand commands too. When I said ‘On by’ as we passed another team, he just kept on going and didn’t get distracted. That’s not what I was expecting from this 11-month old puppy,” he adds with a grin.

Like Nikki and Lindsay, after one trip around the loop tethered to his best friend, Ron was “hooked.”

On this Thursday night all the participants have a skiing background, but it’s not necessary. “It’s got to be helpful,” admits Ron, “but I think if you wanted to start skijoring, you could get yourself feeling balanced on skis in just a few times out to the track.”

What’s most important, according to Lindsay, is the dog. “It’s not really a particular breed as much as it’s an innate desire to pull.”

Karhu in his harness ready to go.

And while many pet owners have tried to quell that desire to pull, struggling to stay in control and heel their pet on the sidewalk, skijorers explain that many canines understand the difference between a leash hooked to their collar, and a line to their harness.

“Karhu knew from the beginning that it was okay, he could pull and keep that line taut,” explains Ron. “And then he just took off and did what he loves most–run.” The second quality of a good skijoring partner.

“I’ve clocked Bubba at 30 miles per hour on a dead run,” says Lindsay, who describes her huge Alaskan sled dog as the “rockstar” of her 12-dog kennel. Harnessed with her Eurohound, Coolio, the pair can average 15 to 20 miles per hour. “That’s even running in the dark,” claims Lindsay.

Speed is the clincher for Lindsay and her husband Nate, especially racing. Nate is the Race Director for the upcoming Animoosh 12K Skijor Race set for Sunday, January 27, the day after Michigan’s longest point-to-point cross-country ski marathon, the Noquemanon.

“We call it the ‘Wild Side of the Noque’,” says Nikki, who also works as the Noquemanon Trail Network Director. “After all the skiing and snowshoe action on Saturday, we turn the trails over to the snowbikers and skijorers.”

The Animoosh 12K starts at 10 am with teams leaving every 30 seconds. Entries are capped at a total of 50 teams in four divisions (male and female one and two dog classes) with awards for the overall winners in each division.

To learn more about skijoring trails in the Upper Peninsula contact the Noquemanon Skijor Club at 906-235-6861 or email [email protected]. To register for the Animoosh go to www.noquemanon.com/animoosh-skijor.