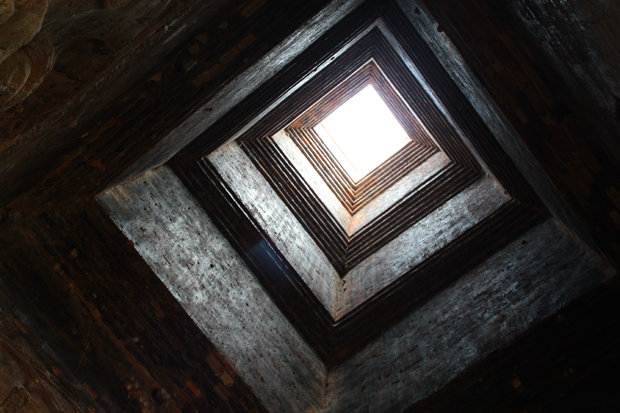 In Cambodia, $45 gets you a three-day pass to explore the ancient city now covered and partially destroyed by the jungle growing through its many structures. Really you need seven days just to glimpse most of Angkor Wat.

The native Kampucheans that built the main structures between the 8th and 10th centuries flourished in northern Cambodia until the 14th century when the civilization was overtaken by its oppressive neighbors who had gained power in the time that the Angkor empire grew itself and became the equivalent of the Romans; too big to fail.

The darkened-gray, massive stone structures that span miles in each direction were likely built as a seat of government for the Angkor empire and dually as places of worship for both Hindu and Buddhist followers, suited to the predominant religions of the then-contemporary population. Bodies and faces of mythological spirits and kings were carved into almost every inch of the visible stone and intricate walkways and staircases that zig-zag through Buddhist shrines above the surrounding forest. If you can’t picture it, think Lara Croft, Tomb Raider. It was filmed here.

After the demise of the empire, the city was left abandoned, largely unused and wholly unmaintained. Between the 15th and mid-19th centuries the forest and the jungle crept in the through the rock structures, oftentimes sending rock tumbling from its place and ruining many buildings. During that time, Buddhist monks were the only people said to have made use of the world’s largest religious structure to date. Angkor was forgotten by the rest of the world and considered derelict until the French explorer Henri Mouhot popularized it anew in the western world in the mid-19th century.

Taking a photo break at the entrance to Angkor Wat. Tuk-tuks are driving toward the temples in the background.

To get to Angkor, tourists stay in Siem Reap, a small, charming city styled to the liking of former French colonists with many cafe-style eateries and narrow colorful streets. My first day in Siem Reap I arranged some wheels to get around the 18 km circuit I was prepared to visit. The city of Angkor that houses Angkor Wat, the main temple, is 80 km in circumference. While Angkor Wat is technically the best preserved and most iconic temple in the city of Angkor, the whole temple complex, consisting of numerous temples is popularly referred to as Angkor Wat. My philosophy with traveling is that you can’t see everything the first time. Leave yourself something unexplored for your next visit. I didn’t even attempt to see the smaller outlying temples, though I hear they’re in even worse condition than the well-preserved and tourist-trodden Angkor Wat, Angkor Thom and Prasat Bayon temples.

To get to each temple, most visitors hire a tuk-tuk driver. A tuk-tuk is just Cambodia’s version of a taxi. It’s usually an open, two- to four-person carriage decked out in Cambodian cloth and mobilized by an attached motorbike. But at an additional $15 – $20 a day, that wasn’t in my budget. Luckily for me, bike rentals were as cheap as the meals. For a total of $2 a day I rented a lightweight bike with a basket and bike lock. Not bad, not bad.

The phenomenon in Cambodia is that you pay in US dollars for everything. ATMs didn’t even dispense Cambodian riel. You get riel by receiving it as your change when you pay with dollars. Cambodians fear the potentiality of their currency becoming worthless as it did not long ago under Pol Pot, so they collect the valuable dollars under their beds. And why US dollars and not euros when Cambodia is a former French colony? Probably because the dollar is so valuable to locals and America’s presence is known in Cambodia thanks to American NGOs (non-governmental organizations – charitable, educational organizations) efforts.

Starting out my first day at the temples I had just my bike, a map of Angkor, a Lonely Planet travel guide to Cambodia with a special section on Angkor Wat, and a two liter bottle of water, absolutely necessary for the 90 degree heat in Cambodia’s hottest month, April.

I didn’t want to hit the two biggest temples first – Angkor Thom and Angkor Wat – so that I would be disappointed with temples that followed so I headed east at the murky moat surrounding the main temple that stands at the southern and main entrance. I chose to head east and stop at the first structure I reached.

So I pedaled and pedaled, for so long that many times I convinced myself I was lost even though I had never left the path I started out on. It was hot but I was shaded by the tall green trees of the jungle. The many tuk-tuks with comfortable, white, western faces that zipped by comforted me that I was in fact going in some sort of correct direction. Further from the entrance the jungle just got thicker and thicker and along the way I biked past wild monkeys waiting for a handout. But with their bared teeth, I don’t know who was brave enough to venture close to feed them.

Finally, around a bend, the jungle opened up into a sandy hill with vendors lined up along the path toward the small temple whose tip was just in view from the road. I locked up my bike and tried to dash past the vendors because I could see they were like all the other vendors in southeast Asia: extremely pushy. Some would even leave their cloth and trinkets booths to follow you down the path shouting offers at you. I averted my eyes as I walked by trying to clearly say I’m not interested in the goods, but then the “hey lady”s started again. “Hey lady! You like? Hey lady! I make special price just for you! Hey lady, you buy?” It’s best to just shrug them away and keep walking without words because if you open up to conversation they swarm like flies down your throat and stifle all your reasons for not wanting to buy what they are offering.

Up on the hill the temple sat motionless, only a few yards away from the 10 or so rabid vendors, but miles away from the sound of the trading bustle. I didn’t yet know what to expect, this was my first temple. I came upon a relatively small structure, just about the length and height of a big house. It was made of golden-orange bricks and it seemed like it wasn’t finished, though I had heard construction was in fact not wholly completed in parts of Angkor.

There was yet another seller stationed at the temple itself, but of a much quieter caliber. And his goods were unique and handmade. He made large paintings of the temples. They were quite beautiful, each a single hue, more like an outline or sketch of the temples than a realistic representation. If I had the means to carry that painting through three more countries for three weeks, I would have bought one. But as it was, my own pictures would have to suffice to remember this visit. I asked him where I was on my map. Prasat Kravan.

Probably because this temple was no great sight of wonder, it didn’t get many visitors. I think I was one of five to walk up the sparse, worn stairs to peer into the walkway of the tallest tower, which was still only maybe three stories high with an open ceiling that let a solid block of light in. What was apparent then, and everywhere I would go, were the probably millions of stone carvings of Apsara, a mythological female spirit in Hindu and Buddhist lore. There were also many Devatas (male and female guardian spirits) guarding entrances.

Within minutes I had seen all there was, but I wasn’t ready to get back on the bike, I had already biked 10 km and just wanted to stay off the bike for a little while longer. Further back behind the temple few would think to go, but the scenery didn’t fold back into woods like on the road. Instead big, wide lush green leaves similar in texture to a palm tree fanned out behind a fence. Now, why was there a fence, I wondered?

My curiosity led me along the dirt path near the fence. Soon enough I was surrounded by all types of jungle foliage on a clearly outlined path. I didn’t have to walk far to notice the little clay hut with a straw-thatched roof. There were children’s toys and field tools strewn about on the ground. A family lives here, just steps away from a temple. I bet the children play by the temples and the ancient wonder is lost on them. Prasat Kravan is simply their perfect play house.

Back on the bike and I keep following the path I started out on which is now winding due north. I come to a cross road and head west back toward the main complex. I sight a few more temples on the way and stop for a short look, but now that I’ve gotten a taste of this holy place’s grandeur, I want to see something spectacular. And something spectacular is just west of where I am, Prasat Ta Prohm, the jungle temple.