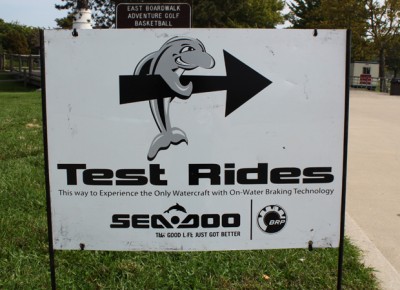 Early Wednesday morning I met up with another Outdoor Hub employee to drive up to Metro Beach Metropark on Lake St. Clair in Michigan. We were headed to the Media Day of BRP’s Ultimate Playground demo tour, which showcased some of the newest cutting-edge power sports vehicles on the market. After a quick and painless registration we were separated into groups for each of the three stations, which would allow us to get our hands on water crafts, ATVs, and the new Can-Am Spyder Roadsters.

Our first stop was the water sports station. It was a bit chilly for a  late summer morning, but after seeing what I was about to experience I wasn’t going to complain. I found myself on the Sea-Doo 210 Challenger jet boat enjoying the breeze in my face as the driver explained some key features of the boat like the digitally adjustable driving settings and driver’s seat, showed us all the hidden storage compartments and how to turn the rear-most seats into lounge chairs. That was all cool, of course, but I wanted to drive the thing! The demonstrator politely let me and two other guests take a turn at the wheel. I got up to the highest speed that I felt comfortable at with our driver standing in between the driver and passenger seats in the middle of the boat in case I should lose control. It was an exhilarating ride, I just wish I would master turning the boat in 360 degree circles like our expert driver.

Next up was the Manitou pontoon boat with the Evinrude motor powering it. I had done my research and heard all the hype about Evinrude motors but it wasn’t until I experienced its power that I finally understood. I have video footage of us doing 40+ MPH ripping right into the wind, then slowing down only slightly to take a turn without flipping… on a pontoon boat! It was incredible. The Evinrude engineers told us specs about the engine that I was blown away by like a once-every-three years maintenance visit and no need for oil changes, EVER. Winterizing takes all of 3 minutes. I was already impressed by the power of the pontoon boat’s engine before they even mentioned that. No other machine brought a bigger smile to my face than the Sea-Doo GTS personal watercraft. There was practically no limit to how fast I could go. I did a quick few loops since my time was running out and we had ATVs to ride next. Somewhere between 30- and 35 miles an hour I got the biggest smile on my face and couldn’t believe that I was looking out at a distant coast line speeding faster and faster while my co-workers sat in an air-conditioned office looking at their computer screens. For a moment I knew that was my plight tomorrow but for the time being I thought, “this is awesome!”

From the water sports area we went to the Can-Am ATV station, where there were just too many toys to choose from. Since the organizers let you ride the course they built as much as you wanted, the riders started to have a little too much fun after about the 5th loop. Pushing the side-by-side vehicle to its limits, my Outdoor Hub co-worker and I would sail over bumps, then pause just before a curve only to accelerate violently around it almost flipping the vehicle at one point in time, then stop it again and accelerate 0 to 40 MPH in the few seconds we had before we got too close to hitting another driver.

Lastly, we checked out the Can-Am Spyder Roadsters RT and RS models. The Spyders were like a cross between a motorcycle and an ATV. The Spyder RS was the sporty version and the RT a two-person cross-country touring vehicle. Many riders seemed hesistant to drive something so odd and futuristic, but I found it a blast. The stabilizing control makes it so you practically cannot flip over (at least not with my weight and driving habits). Stop signs were set out to experience the anti-lock brake system, but on the second time around I was blowing past them because it was simply too much fun to go as fast as you possibly could in between cones in a parking lot. I really wish I could take that thing out on the road for a long journey where the speed limit is the last thing on my mind.

Over lunch we reminisced about which machine was the biggest and baddest and there was no shortage of adjectives to describe how much fun we had. One woman mentioned just how solidly these machines were really built. In fact, the engineers have thought of everything. Earlier the Spyder engineer went over all of the Spyder’s features. Seemingly done with his spiel, he remembered yet another feature. When slowing down at stop signs or lights there is an optional feature that softens your radio’s volume so you don’t end up looking like a jerk at the intersection blasting Andrew WK.  I asked, “So what’s left to improve upon for next year’s model,” he shrugged his shoulders, smiled and said “I don’t know.”

You haven’t missed your chance… yet. The BRP Ultimate Playground is going on this weekend, September 22nd to the 25th at Metro Beach Metropark in Michigan (Lake St. Clair). There is a limit to the amount of riders that can attend so sign up on their website now.