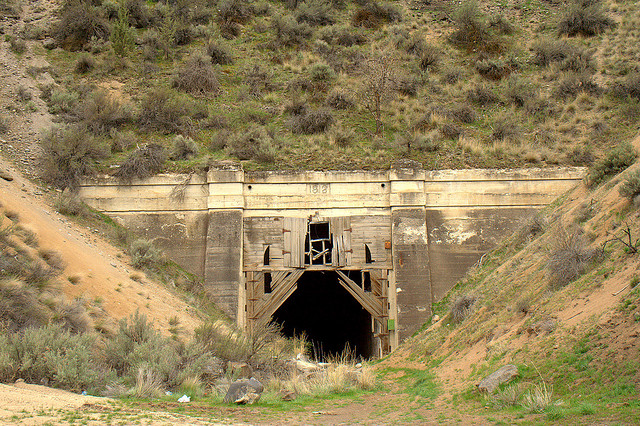 If you’re like me, when you’re hiking you’re always looking for a new place to explore. Some of my favorite adventures have been through dilapidated and decaying high rises and abandoned suburbs. But there are some places you need to simply stay out of, as the experts at Pursue the Outdoors explain.

It seems like the most adventurous thing in the world. That dark opening in the hillside beckons, tantalizes, excites. What wondrous treasures await discovery inside? What artifacts might remain in this time capsule, mute testimony to an era when grizzled men moved tons of rock in pursuit of their dreams? Such is the poetic, romance-novel appeal that might induce you to take leave of your senses and crawl into an old mine. Thousands of such small openings are scattered throughout the country. Although most common in the historically “hard rock” Western mining states, they can also be found in the old lead and copper districts of the Midwest. In reality, multiple dangers lurk beyond the pale ring of light that filters through the adit mouth.

While scoping out a field area for a thesis project, I spent six weeks camping and hiking in the West Elk Mountains, in the Colorado Rockies. My days were spent tramping around the flanks of a majestic 13,000-foot peak, chosen due to tantalizing reports of silver mining activity around 1900. During my ramblings, I came across several old mine workings. Some were simply short adits driven into the hillside, designed to test for the presence of silver, copper, and lead minerals that might be distributed within the contact zone of the porphyry intrusive that defined the mountain peak. Other workings, though small, were relatively more sophisticated and had rail tracks extending from the passageways out onto the progressively extended pile of fine waste rock. I explored each of these, sometimes crawling over piles of rock that had fallen from the roof or ribs, or widening a hole and sliding down the pile of washed-in dirt to reach the adit floor.

This really was the height of folly, as I was alone in the wilderness and had no idea of the potential dangers. I currently work in the field of ground control engineering, and have firsthand knowledge of numerous fatalities that occurred in active mines when rock fell out of the roof without warning. I have also become more familiar with the extensive engineering design work, and variety of support systems, required to develop and maintain a mine opening. The “old timers” were often lucky by developing small openings in hard rock, but modern mining engineering indicates that time does not favor stability.

A more insidious danger is represented by a lack of breathable air. In sealed underground openings, the air may have become “stale” by not being circulated through the outside. In modern mines, a staff is devoted to designing and maintaining ventilation systems that cycle fresh air through the mine. Some gases displace oxygen, but are colorless and odorless and give no warning of danger until the person suddenly realizes that they feel as though they have been holding their breath for several minutes. This is a condition known to miners as “black damp” that can cause loss of consciousness or death. While working in Bolivia, I entered over a dozen small mines in a district that had been developed initially by the Spanish, or perhaps even the Inca, and later by a Polish mining engineer in the early 1900′s. The most modern operation had closed in the 1980′s, when the underground portion of the mine was abandoned as uneconomical, but a small open pit was developed that intersected some of the old workings.

As a geologist working to unravel the geological history of this area, I entered the mine to document the relationships between intrusive phases. As I was intently concentrating on the last face of the mine, trying to decide if the rock was rhyodacite or dacite, I suddenly noticed a warm, tingly, numb sensation in my nose and lips. Panicked, I exhaled what little air remained in my lungs and held my breath, while at the same time wheeling and sprinting back up the tunnel. Weird, ghastly shapes of rotten canvas and timbers danced in the shadows thrown by my flashlight. I had little hope of sprinting the nearly 300 yards to the mine mouth, but as gray spots floated before my eyes, I determined to keep my legs pumping to at least get out of what might only be a pocket of bad air. Then I saw a sliver of light where the floor of the open pit had intersected the tunnel. Fresh air! I ran to the cut and gulped in the thin mountain air. Although the air smelled like decaying sulfides, at least the threat of black damp was gone, and so my panic subsided enough to allow me to walk briskly out of the mine.

Crawling into an old mine, in which no miner or engineer has evaluated the condition for decades, is something that I would now consider as pure stupidity. No shiny bauble or rusty artifact is worth it. Take a picture of that beckoning hole, and then leave it alone. Remember that the “old timers” have already taken out the rock and dumped it on the ground for you. Satisfy yourself with a little piece of azurite, malachite, chalcopyrite, or pyrite from the dump pile if you must have a souvenir, but stay out of that mine!