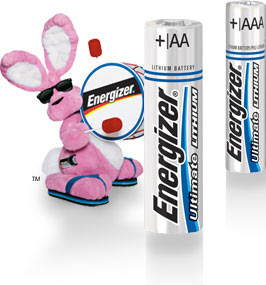 There’s a lot to do when you go camping, and a lot of it has to be done in the dark. Those of us who prefer to hike to our campsites can’t pitch our tent in the blinding glow of our truck’s high beams. We can’t plug the stove, lantern, stereo, TV and Playstation into the generator to experience that lovely combination of gas fumes and noise. The pedestrian campers need to see what we’re doing just as well as the car-campers do, and thanks to Energizer Ultimate Lithium batteries, “bright” doesn’t have to mean BIG. Take headlamps, for example . . .

It’s likely the headband was mastered before the oil lamp — probably even before fire — but I’ll bet the two were combined soon after folks realized they could do more stuff if one hand wasn’t always holding the torch. But early headlamps just didn’t work that well. They were bulky, and there was always the danger of severe burns from flaming seal blubber . . .       With the advent of Energizer’s original AA batteries several decades ago, the headlamp concept began to make sense. Then Energizer introduced the lithium battery in 2003. These batteries were more lightweight, and lasted longer than the old style, and finally a headlamp didn’t feel like a pet monkey clinging to your scalp.

But bringing campers out of the dark ages wasn’t enough for the company known for technological revolutions. A few refinements over the last decade have resulted in the Energizer Ultimate Lithium battery — a game-changing product that incorporates four key features of reliability: They power devices up to eight times longer than alkaline, with an unprecedented 15-year shelf life. They are also 1/3 lighter than alkaline, and can deliver steady power in extreme temperatures ranging from -40 F to 140 F. That should hit home with anyone who’s slept with their double AA’s under a pillow or down their pants, just they could fire up the GPS the next morning . . . But what else would you expect from the company that practically invented portable electricity and, in doing so, re-invented how people around the world spend their time outdoors? That is, their hard-working scientists helped allow us to do things other than put batteries down our pants to keep them warm.

Whether you’re camping in the back of a pickup truck, or hiking in twenty miles this summer, don’t forget that safety is the combination of responsibility and performance. Had I not remembered that rule as I double-checked my headlamps and spare batteries while packing for a hike one evening last fall, a sketchy situation with a few moose would have been downright scary.

I was on a familiar, easy section of The Great Western Trail, in Utah’s Wasatch range. It was dark out, but the trail wasn’t very steep or rocky, with an uphill slope on my left, and a loud river on my right. Not far ahead, in the middle of the trail I saw the tall, green eyes of a moose. As I got closer I noticed it was a bull. Figuring he’d make way, I got to within twenty yards or so, then I started to veer off toward the river. A few steps later my headlamp’s high beam picked up another set of eyes, another rack directly in front of me. There were thirty yards between these bulls, so I figured I’d have to split the uprights since the river was blocking my way around the second bull. Just as I started to pick my way through some pine saplings I came up against a third bull. It had be pretty easy to keep the first two bulls frozen in the beam of my Energizer headlamp, but now there were six eyes in the mix, spaced fifteen yards apart and I had to get by them somehow . . . Well yes, with some fancy footwork and a few simple diversionary tactics I did get by them and I’m alive to tell the tale. The moose did what they generally do when you walk by, which is nothing. But you never know that they won’t do anything until it’s already over, and no matter what happens, by then you always have a pretty good story to tell.