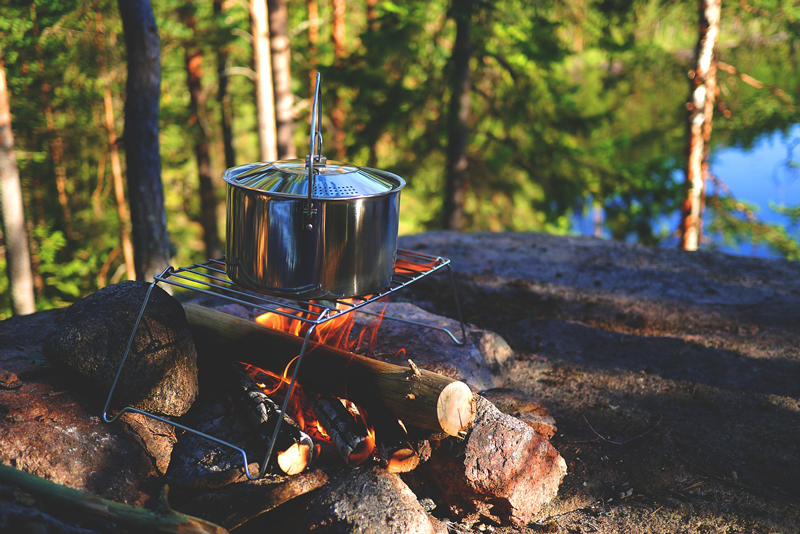 If you’ve ever been camping, you probably have a vivid memory of something you ate during your trip. And maybe you even remember how it smelled or what the texture was like. After all, part of the camping experience is cooking outside of your traditional home kitchen and roughing it a bit in the great outdoors.

One of my childhood-camping memories begins with middle school me hiking into the forest in search of the perfect twig to cook a cheap grocery-store hot dog on. Then, attaching the dog to the end and balancing the twig over a campfire as I watch the hot dog quickly char in the open flames. I remember breaking off the crinkly black burnt pieces with my fingers before putting it in a hot dog bun and dousing it with ketchup. Over the years, I’ve perfected my rotating campfire hot dog cooking technique — now producing an evenly cooked golden brown all-beef delicious hot dog.

Here are 11 fun, unique and odd camping foods to try — along with some bonus foods. 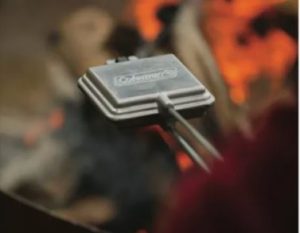 Danielle Taylor’s family in Pennsylvania brings campfire grilled cheese irons along when camping and make what they call “Mountain Pies.”

To make these Mountain Pies, you butter up your bread (or spray the inside of the iron with a non-stick cooking spray). Then, instead of just using plain cheese for filling like a traditional grilled cheese, put pizza sauce, shredded mozzarella cheese and pepperoni. Or use marshmallows and cherry pie filling. Then simply close the iron sections together and stick in hot coals until. Your sandwich is toasted the way you like it.

“I always go for a sweet combo,” Taylor says. “Peaches and honey are really good!”

Karen Loke, the social media producer for Texas Parks and Wildlife, recently produced a short video for National S’more Day titled, “So many S’mores!” In the short clip, Loke makes S’mores with a twist.

In one combination she piles a chocolate peanut butter cup on top of bacon with pieces of banana on top — ultimately squishing the tower of treats between two graham crackers and a half-burnt campfire marshmallow.

Phil Bloom in Indiana reminisced about a Boy Scouts trip many years ago when his troop was wrapping up a week-long campout.

“It was Sunday morning, and scrambled eggs were on the menu,” Bloom says. “Our Scoutmaster, usually a good guy and a stickler on camp food, had a No. 10 can of green peas he didn’t want to take home. So, he instructed us to mix the peas with the scrambled eggs.”

“There are 12 parts to the Scout Law,” he says. “No. 7 is ‘A Scout is Obedient.’ We did as we were told and stirred the green peas into the eggs, but I’m not sure how much was consumed. In fact, I’m certain that if a team of archaeologists conducts a dig in that park eons from now, they will discover clumps of a mysterious substance and ask themselves, ‘Whose bright idea was this?’”

Bloom also shared one of his favorite camp foods that’s always a hit and easy to make at camp:

“Take a tube of biscuit dough, separate the slices and cut each slice into quarters,” Bloom adds. “Drop them into a pan of hot cooking oil. Then mix sugar and cinnamon into a paper bag. When the dough pieces are sufficiently browned, scoop them out, dump them into the bag of sugar and cinnamon. Shake well and serve.”

Chris Paparo, known as “The Fish Guy” in New York says when he goes to his camp in Maine, he has to get red hotdogs. “Same as a regular dog, but they have a bright red skin and taste as equally gross,” Paparo says.

In an Atlas Obscura article on Red Snappers, Rachel Rummers writes, “Sometimes Red Snappers are white fish; sometimes they’re red meat. In Maine, the latter is an iconic style of hot dog. Synonymous with family cookouts, camping trips, potlucks, gas stations and even high school basketball tournaments, Red Snappers are as much a part of Maine’s food culture as lobster.”

Jeremy Puglusi, host of the RV Atlas podcast, says smash burgers are a total craze for his family at the campground these days.

“My family loves them and insists I make them every time we camp,” Puglusi says.

Puglusi even wrote an article titled, Making Perfect Smash Burger With Blackstone’s Chef Nathan Lippy, where he references thousands of campers and backyard chefs cooking on their Blackstone griddles and offers up 12 tips to making the perfect smash burger, including: “Use 80/20 ground beef and loosely pack it into small balls, put your Blackstone Griddle on high heat and get it ripping hot … place the balls on the griddle and smash with a firm spatula or burger press to your desired thinness. Chef Nate says you only need to smash for about 5 seconds … and to flip your burger after about 90 seconds if they are small. They cook up fast!”

Christine Peterson, who is president of the Outdoor Writers Association of America (OWAA), a freelance journalist and an avid outdoor adventurer, says that her parents made beans and weenies (baked beans with chopped up bratwurst, grated cheese and green chilies) camping many nights when she was a kid.

“When my husband and I started dating in college, we planned beans and weenies for our first camping trip, but forgot a can opener and all silverware,” she says. “In the 16 years since, we’ve eaten beans and weenies on almost every camping trip for one meal. We eat it so often, in fact, that our good friend who hunts and camps with us recently said: ‘You know, there are some truths in the world, like that the sun will rise, and the sky will be blue, and the Peterson’s will eat beans and bratwursts camping.’ He was joking, but it made me decide to diversify our meals.”

Peterson and her family will be trying chicken and waffles soon with a cast iron waffle maker and pan.

Ian Marcus, originally from Massachusetts and now living in Colorado, has stayed true to a New England staple and kept peanut butter and fluff sandwiches on his camping menu.

“I’ve carried tradition from my younger days to Colorado and won’t let go. Sweetness layered with more sweetness; it’s the ideal sandwich for those with a sweet tooth. If you’re feeling wild, try adding Nutella,” Marcus says. “PB & fluff must be on white bread. (Joking, but not really joking).”

“It’s a great way to start your day,” he says. “It’s packed with fats, proteins, carbs and starch.”

Cynthia Smith in Montana loves making blueberry cobbler with her family when camping.

“It’s just a yellow cake mix, one stick of butter and a can of blueberry pie filling,” says Smith, who recommends cooking it in coals in a Dutch oven. “It makes a fantastic tasting dessert.”

“We used to make huge batches of chicken noodle soup and seal them in bags that could then be dropped in a pot at camp,” said Smith. “Bring it to a boil and you have a quick hot dinner.”

Kris Millgate, outdoor journalist and owner of Tight Line Media, spent a month camping out of a truck with a slide-in truck bed camper while she gathered footage on salmon migration for an assignment — traveling 850 miles from the ocean to Idaho.

“It’s easy to lose yourself in fin,” Millgate says. “By doing so, I discovered my new favorite roughin’ it snack — Swedish fish gummies swimming in a sack shared with a school of Goldfish crackers. Perfect salty sweet.”

“I put all of my meats — elk, deer, etc. — into a five-gallon bucket with a marinade for at least six hours ahead of time,” Cobbaert says.

“When the meat is ready to cook, I cut it into bight-size pieces so it’s easy to eat,” she says. “Then I add a ton of chopped veggies in a pot and slowly cook the stew over an open flame using a campfire tripod. It’s a great way to feed a big crowd and you can use different marinades and mix up the flavor.”

“We would grab snack-size bags of Doritos or Fritos. With the chips, we would add ground beef or chicken, lettuce, salsa, cheese, and sour cream,” Holland says. “This meal was super easy to make, the only cooking we had to do was preparing the meat.”

“Another meal that we would eat when camping was an omelet in a bag,” she says. “We would crack an egg or two into a Ziploc bag and then add any ingredients that we had such as peppers, sausage, onions, cheese, and tomatoes. We would shake our bags so that all the ingredients were mixed and then place the bag into a boiling pot of water. After 10 or so minutes we would pull out the bag to a yummy homemade omelet.”