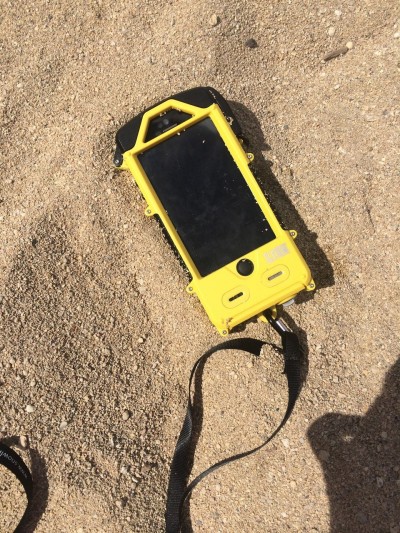 After reviewing the Snow Lizard SLXtreme 4 for ActionHub, the company sent me the most recent model to see how the durable phone case holds up. Compatible with the iPhone 5 or 5S, the SLXtreme 5 boasts many of the same great features as its predecessor.

The reason most people come across the product is because they’re scouring the Internet, looking for the ideal waterproof case they can use in and around the water. Unlike many of its competitors, the SLXtreme 5 goes above and beyond with its inclusion of a solar panel that covers the entire back of the case, perfect for those who plan to be outside all day and can’t get to an outlet.

While I haven’t yet made the upgrade from my iPhone 4S to a 5, I used the case with a number of phones that belong to friends and family members, and had my colleague, Sara test it out on a recent trip to Hawaii. The overall consensus was that it seemed like a pretty good case with useful features, but maybe not for its retail price of $149.99.

Let’s start with the solar charger. Similar to the SLXtreme 4, the new case gives phones a bit of a boost, but it never fully charged my phone, even when I was outside all day. Sara reported the same thing, although we agreed it was better than most cases because it at least provided some charge. When using your phone for taking photos underwater, it’s easy to drain the battery rather quickly. For me, it was using an accompanying waterproof, Bluetooth speaker playing Spotify from my iPhone that made it necessary for a battery boost. This was an easy way to have music all day, without fearing the device the music was coming from could get ruined by water.

Sara swimming at Kaimana Beach, photographed with her iPhone that was protected by the SLXtreme 5 case.

As for taking photos underwater while using the case, it worked pretty well. As suspected, they turned out a bit grainy. In Hawaii, Sara said it was necessary to have pretty clear, calm conditions and a lot of sun for her photos to turn out well. I gave up trying to take underwater photos in Michigan, as the lakes aren’t even close to being as clear as the water in Hawaii. When used outside of the water, photos turned out fine. She said after a while, the buttons on the case began to jam, making it difficult to photograph. This was the main problem, as taking photographs underwater is one of the main reasons someone would buy the case. Another con is that the case sinks. The case is advertised as being able to go up to six feet underwater, but if you accidentally drop it, you’ll have to swim quickly to reach it.

Durability is an area where Snow Lizard has really succeeded. Although the case is extremely bulky, users don’t have to worry about their phone getting harmed in any way. It’s rugged and includes a solid screen protector, while still allowing the touch screen to function properly. You need to press a little harder, but overall it works pretty well.

“I started using the case even when not in the water, like on hikes and at the park,” Sara said. “I loved the durability of it and not having to worry about dropping it or possibly getting water on it like on the park’s grass, which was covered in dew.”

It’s simple to get on and off your phone, without damaging the phone in any way. The case is available in orange, black, yellow, or white. While it is compatible with the iPhone 5 and 5S, it does not work with the 5C.

“If you wanted to start taking a lot of photos underwater, I would recommend a GoPro,” she said. “But as a waterproof, durable case for an active outdoor lifestyle, it was very good choice.”

For more information about Snow Lizard and to check out other products, visit the website.