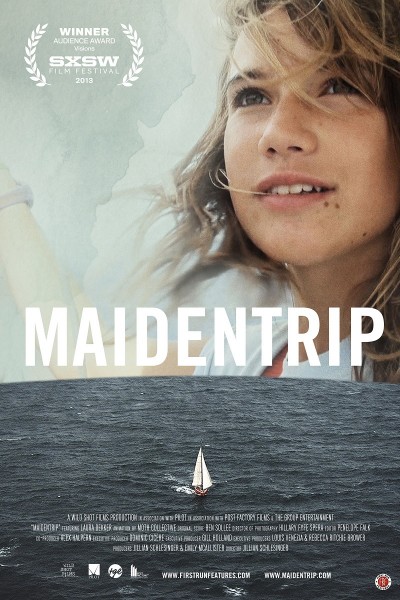 Maidentrip is a peek into the world of young sailor, Laura Dekker. Her story is not new to most of us. The 14-year-old received tremendous media coverage when she first sought permission to cross the world by boat, alone. Beaten down by reporters who claimed she was delusional, spoiled, and even crazy, the story begins with the courts finally allowing her to pursue her dream of becoming the youngest sailor to cross the globe. As she sets off, Laura lets us in on the true story, one that is less about sailing and more about exploration and self-discovery.

Born at sea in New Zealand, Laura’s only goal was to return to it. After living on a boat for the first three years of her life, everything changed when her parents docked in Holland and decided to separate. The instability in her life, including her father’s depression and her mother’s absence, required Laura to be mostly independent from an early age. This independence, coupled with her difficulty to fit in and make friends, drove Laura to have an intense love of the sea, which may be why tackling such a large trip alone at such a young age seemed not only possible, but necessary. Though the harsh world of media scrutiny almost stole away her dream and separated her from her parents, it is clear from the beginning that Laura could not be stopped.

“They tried to break Laura down, but she’s too strong,” her father explained.

These early stories of a broken family and unusual upbringing offer a framework for the documentary. Memories and photos are sporadically interspersed throughout the film to accentuate points about Laura’s normalcy and behavior. Her strength and passion are the driving forces behind the expedition. Unlike other kids her age, she is bored with everyday pursuits, and instead prefers quiet and solitude. As the story dives deeper into her life, these qualities magnify to eventually produce a girl separated from normal society.

Her boat, Guppy, is the main setting for the film. We learn about how it was purchased and fixed up and the love that Laura feels for her home on the sea. Most of the footage is taken by Laura herself on a Sony Handheld, allowing viewers to have insight into her world in the purest form. Director Jillian Schlesinger’s brilliant decision to give Laura this artistic license gives the film a true feeling of authenticity.

In that same vein, Laura’s inconsistency in language does not take away from the story at all, but adds to the natural feel. Subtitles allow her to naturally fluctuate between Dutch and English without disrupting the story. When she isn’t narrating, the film employs a classic, instrumental score to accompany picturesque views of both land and sea. Another brilliant editing choice was the addition of a hand-drawn, water-color map, reminiscent of something you might see in a children’s book, to break up the trip and document Laura’s progress.

Each of these elements adds to the film’s feeling of youth and wonder. As the journey continues, beautiful images of the sea and the foreign lands are presented between scenes of normalcy like grocery shopping, cooking, and boredom.

At the beginning, Laura expresses her excitement to see the world, which is why she plans to take two years to complete the expedition. She meets up with some friends and family, and enjoys time exploring new lands. As things progress, however, the land and its inhabitants become less desirable to her, even annoying at times. She expresses this annoyance when a reporter that has been following her comes to visit, turning the radio up and not answering any questions. This annoyance with humans grows, expanding to include her father, who later in the film comes to visit.

The sailing scenes are truly spectacular, with many views of the waves and the surrounding wildlife. Laura also displays her true understanding and love of this setting, fiercely driving into storms unafraid. The strong winds, heavy rain, and large swells that would concern most are anything but scary to her, as she often describes the scenes as “cool” and “awesome.”

Though the film ends shortly after Laura’s trip does, it is obvious that this is just the beginning for the young sailor. She has clearly found her purpose, whether or not we understand it, and it is that love and commitment that is truly inspirational. We leave her floating out at sea, where she belongs, and where she probably will always be.