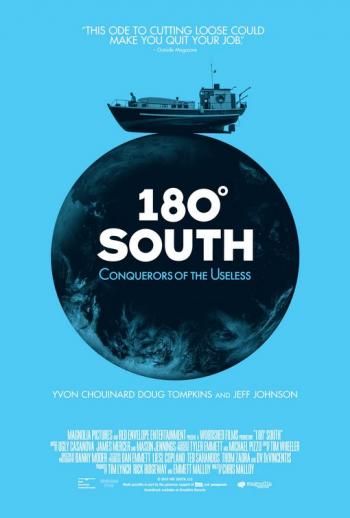 Although 180° South: Conquerors of the Useless was released in 2010, it’s a timeless story of adventure seeking in a world characterized by the bland structure of daily life. The documentary follows Jeff Johnson, a lover of the outdoors, as he leaves his traditional nine to five job on an exploration where he sails from Ventura, California to Patagonian Chile, where his goal is to climb a peak called Corcovado. Inspired by the 1968 trip of his role models Yvon Chouinard and Doug Tompkins, Johnson sets out to retrace their path with new life.

The movie was directed by Chris Malloy, who also helped create the documentaries Thicker than Water and A Brokedown Melody, among others. Those traveling with Johnson were Chris’ brother Keith Malloy, who made his mark in championship surfing and signed on for the documentary to be able to surf in places he had not yet visited. Also on board was Timmy O’Neill, who is a world-class mountaineer.

While the initial voyage by Chouinard and Tompkins was traveled by land in their Ford E-Series Econoline Van, Johnson opted for sea travel. Because of weather that damaged portions of the boat Johnson was on in the beginning of the trip, the crew was forced to make a pit stop at Rapa Nui, also known as Easter Island, until repairs were finished.

While on the island, Johnson met Makohe, who had lived there her entire life and was one of the first female surfers in the area. During his stay, Johnson learned about the history from locals. The Polynesian island in the southeast Pacific Ocean is known for its moai statues, which produced competition and conflict among the people who were constantly attempting to outdo one another with the sheer size and artistic features put into each creation. This eventually led to a depletion of natural resources and vast deforestation because of the massive logs that were used to transport the statues, which contributed to the decreased population from 15,000 to a mere 111 in 1877.

After hearing this story, Johnson quoted Aldous Huxley by saying, “Men do no learn very much from the lessons of history. And that is the most important of all the lessons of history,” and said the words finally resonated with him. He translated this message on a broader scale than just what happened to the population on Rapa Nui, but about our culture as a whole.

“I find myself thinking about the collapse of Rapa Nui. Growth is inevitable, but can we maintain this momentum in the long term?” he wondered. Throughout the journey, it became clear Johnson was no longer solely focused on completing his trek, but about the damage that is being done to our environment from human decisions. He questioned how long many of the beautiful habitats he saw along the way would be in existence.

After the boat was repaired on the island, the crew made their way to Chile for the next leg of their trip and to visit Makohe’s friend, surfer Ramon Navarro. With Makohe now part of the crew, the group gained knowledge from Navarro and his family, who detailed the history of the land, and how pollution and urbanization have crumbled the quality of life his people once knew. It was at this time that Keith and Timmy separated from the group on to their own expeditions.

While in the city, Johnson said, “Being here (Chile) reminds me of my life back home and I’m beginning to think about my own use of resources.”

On the last segment of travel to Patagonia, South America, Keith met back up with Johnson and Makohe. It is here where they finally reached Chouinard and Tompkins, who have worked with their families to sustain the Conservacion Patagonica Land Trust, which stretches over two million acres. It is one of the largest private land conservations in the world.

With O’Neill arriving several days later, climbing Corcovado was their last task. Taking words of advice from Tompkins, who is the only person to have reached the top, the group set out. Keith departed partially through the trip to surf, but problems arose when they reached the ice field near the peak. Because the trip was about a month late due to setbacks such as the boat repairs, the ice had already started to melt and there were no safe routes to reach the top. They decided to turn back before climbing the last two pitches.

From the very beginning, it’s clear this is not a fast-paced outdoor sports documentary, but rather a soul-searching undertaking. Although Johnson’s initial goal was not reached, it was clear disappointment was not the feeling he embodied. Rather it was an appreciation for all he had experienced and a growing concern throughout the film for how to best care for the earth, even though much of it has been destroyed. He discussed the recent building of dams in the area that are wrecking the natural environment, and how locals have banned together to protest against future dams being planned.

“In these far corners of the world I’m seeing the effects of encroaching progress,” Johnson said. “And most of this has to do with over-consumption elsewhere.”

Image from MichaelQSchmidt on the Wikimedia Commons