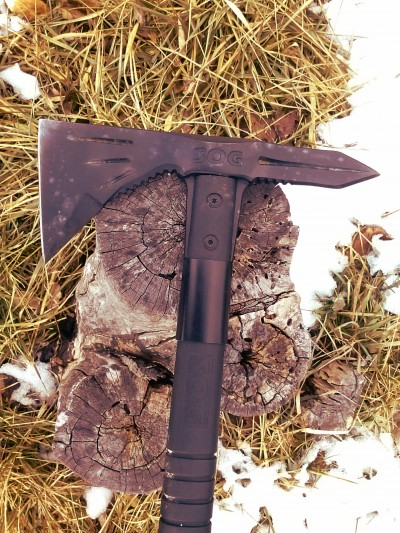 Let me preface this review by saying that the SOG Voodoo Hawk is one of the better looking tomahawks I’ve seen out there. Aesthetically, the Voodoo definitely has a “bird of prey” feel about it. Holding one of these should automatically grow some hair on your chest, deepen your voice, and give you an urge to buy out the local hardware store of wooden planks.

That said, let’s dive into what makes the Voodoo Hawk a bayou terror.

SOG preceded the Voodoo Hawk with the Tactical Tomahawk and the FastHawk. The Voodoo was envisioned as some sort of compromise between the tactical’s longer reach but ungainly throwing ability and the FastHawk’s speed but small size. What they came up with, I’m guessing, was nothing like they had planned for.

By comparison to the other two, the Voodoo has a much meatier blade and heft to it. Whereas its predecessors’ skeletonized frames made them supposedly quicker, the Voodoo is all about strength and power.

Much improved over SOG’s earlier offerings. The longer blade makes the tomahawk useful for a number of purposes, including camp use (which is why I included the “camp axe” moniker in the title). Because of the voodoo’s shape, it essentially is just a really balanced workhorse axe. Other tomahawks can sometimes be utterly useless in a practical situation, but not the Voodoo. Beneath its tactical-minded exterior is a hard-working tool suitable for campers, hikers, and outdoorsmen of every stripe.

The blade material is 3CR13 steel, which is a pretty durable steel although its edge retention could be better. From what I know, it’s comparable to 420J2 steel but slightly harder. Overall though, it’s respectable choice for the Voodoo’s $75 price tag. Not scheduled in my rough testing was accidentally throwing the tomahawk against some pretty sizable rocks. Several times. The result was a lightly chipped Voodoo and incredibly, some fairly impressive damage to the rocks.

The spike on the reverse side of the axe head is a monster. I’ve seen it used to demolish anything from cinder blocks to cement to putting drinking holes into coconuts. Odds are, if there’s something you want broken in pieces (or at least punctured), the spike will do the job.

Cheap, durable and utilitarian. Like anything else in life, the nylon sheath that comes with the Voodoo could be better. However, the Voodoo is so rugged that I’m not entirely sure where the sheath went. Probably off being used as a hat by Bear Grylls. Or more likely, shaking around somewhere in my trunk. If I remember correctly, a belt loop on the side of the sheath allows hip carry, although I would recommend against it. The four snap fasteners that secure the Voodoo in place seem sturdy enough, but a mistake could send an axe blade dropping towards your feet. Place the Voodoo in your pack like most sensible people. If that was cool enough for Gimli, it would be cool enough for you.

Glass-reinforced nylon with a metal butt camp. It feels solid, is solid and performs solid. A traditionalist may prefer wood but I want a practical material that holds up to the strain of use. A good summary for the Voodoo would be this: it can do anything an axe of its size could do, and you can throw it with a reasonable chance of it sticking in something. I tried my hand at some other comparable tomahawks out there, including SOG’s tactical ‘hawk and some more old school versions. The Voodoo falls in the middle when it comes to throwing ability. It’s heavier than some due to the solid construction and larger blade, but still remains fairly well balanced. The Voodoo sticks consistently at 18-20 feet, probably my maximum distance for a tomahawk. Closing the range to 10 feet is where it really shines, cleaving deep into the wooden boards I’ve set up for my tests.

Unlike some other tomahawks, which merely nip into the wood in a kind and gentle manner, the Voodoo takes giant bites. On the weaker boards it would cut its way through or tear off a corner. Getting hit with one of these is a sure way to drum up business for plastic surgeons.

As a chopping and cutting tool the Voodoo is superb. Although throwing does wear down the edge a bit, the blade is easy to sharpen and the 3CR13 keeps a fairly sharp cutting edge. I used it without worry on anything from wood to soft metals to solid ice (and a few coconuts). It definitely makes you feel a bit like a viking.

The Voodoo Hawk is a departure from its American roots, but it still remains a deadly weapon. The core of the tomahawk hasn’t changed much in the past few hundred years, nor should it. The Voodoo is simply another reiteration of a classic design that has already proven its worth, with a few improvements.

For your viewing pleasure, here’s a video of a fellow reviewer taking on a cinder block with the Voodoo.