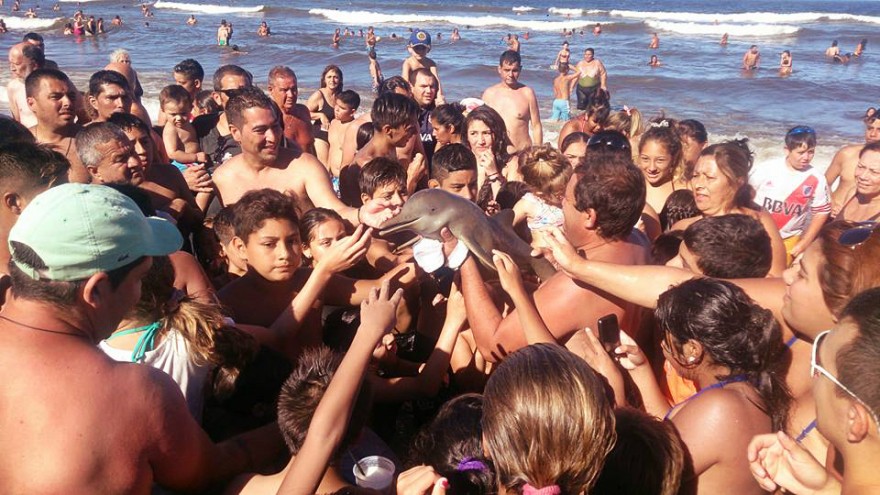 This crowd of tourists is being blamed for the death of a young, and relatively rare, dolphin.

What is the strangest—or most despicable—thing you’ve seen someone do for a selfie? Photographs of a juvenile La Plata dolphin being yanked out of the ocean and held aloft by a mob of tourists in Argentina drew outrage after the images went viral on social media last week. According to CBS News, the photographs were taken at a beach resort in Santa Teresita and two dolphins had been involved. The one most commonly seen in the images died, likely as a result of exposure since the animals cannot survive for long out of water. Conservationists say this is especially concerning since La Plata dolphins, or Franciscana, is one of the rarest dolphins in the world. It is believed there are less than 30,000 of the species alive, and most are found only off the coast of South America.

“The incident prompts us to inform the public about the urgent need to return these dolphins to the sea if one is found on the shore. It is vital to help rescue these animals, because every Franciscan counts,” said a statement from the Argentine Wildlife Foundation.

The La Plata dolphin also happens to be one of the smallest of all dolphins. The juvenile spotted in pictures taken from Santa Teresita is actually not much smaller than an adult, which weighs on average 100 pounds. La Plata dolphins have a lifespan of around 20 years and is considered a river dolphin, although it prefers brackish estuaries to freshwater rivers. Experts say that it is especially vulnerable to exposure.

“The Franciscan, like other species, cannot remain for much time out of the water. It has thick fatty skin which provides warmth, so the hot weather will cause rapid dehydration and death,” the Argentine Wildlife Foundation stated.

Photos also showed tourists eventually discarding the dolphin on the beach without attempting to bring it back to the water. This is another reason why many wildlife officials have urged the public to refrain from taking wildlife-related selfies. Believe it or not, the act of taking selfies with larger animals such as bears or moose has actually become a notorious problem in some parks, and there have been occasions where investigators linked it to an animal attack. There were several instances last year where visitors to Yellowstone National park were injured by bison after approaching to take photos. A branch of the US Forest Service even issued a warning against taking selfies with dangerous animals, something most people would think is common sense.