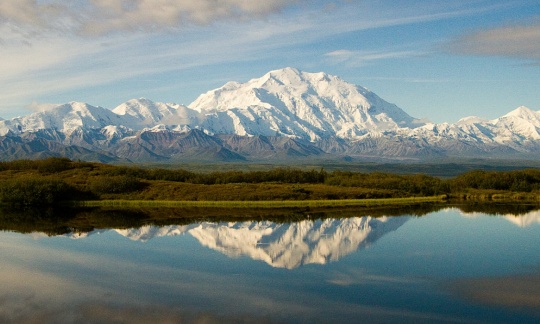 Denali stands tall at 20,237 feet. Image courtesy of U.S. Department of the Interior.

Time to update the apps, guidebooks and maps.

Known for generations by Alaska’s Koyukon Athabaskan people as Denali, the 20,237-foot peak was officially named Mount McKinley in 1917 after President William McKinley.

Now the Department of the Interior and the White House have announced an official name change of the mountain from Mount McKinley to Denali, meaning “The Great One.”

“This name change recognizes the sacred status of Denali to many Alaska Natives,” U.S. Secretary of the Interior Sally Jewell said in a statement. “The name Denali has been official for use by the State of Alaska since 1975, but even more importantly, the mountain has been known as Denali for generations. With our own sense of reverence for this place, we are officially renaming the mountain Denali in recognition of the traditions of Alaska Natives and the strong support of the people of Alaska.”

A mecca for mountain climbers, some 1,200 mountaineers attempt to scale the peak every year with about half achieving that goal.

The name change came in recognition, says the Department of the Interior, in recognition of the long history of strong support from Alaska state, tribal and congressional leaders, and in resolution of an official name change requested 40 years ago.

President Barack Obama endorsed the secretarial order by Jewell, granted the authority to make changes like this in certain cases thanks to a 1947 federal law that provides  for the standardization of geographic names through the U.S. Board on Geographic Names.

Though indigenous people have called it Denali for centuries, the story goes that it wasn’t until 1896 that a prospector came from exploring the central Alaska mountains and  heard that William McKinley was nominated as a candidate for President. To show his support, the prospector declared the tallest peak of the Alaska Range as Mount McKinley.

McKinley went on to became the country’s 25th president and was assassinated six months into his second term.

But he never ventured to Alaska.

In 1975, Alaska Governor Jay S. Hammond requested that the Secretary of the Interior direct the U.S. Board on Geographic Names to officially designate Mount McKinley as Denali. The proposal, never withdrawn, is based on a resolution that was passed by the Alaska State Legislature.

“Recognizing the long history and discussion about the name of this iconic American mountain, the time has come to restore the traditional Alaska Native title Denali for this landmark, which holds great significance to the people of Alaska,” said National Park Service Director Jonathan B. Jarvis.

“For decades, Alaskans have been urging the federal government to recognize Denali by its proper name. I am pleased that the White House and the Department of Interior have taken the necessary steps to finally make this important change,” said Governor Bill Walker in a release. “Alaska’s place names should reflect and respect the rich cultural history of our state, and officially recognizing the name Denali does just that.”

For years, Alaskans have fought to recognize their mountain by its true name, Denali. Governor Walker and Lieutenant Governor Mallott said the Department of Interior’s decision to recognize the name Denali honored Alaska’s First People and their culture.

“Alaska’s Athabaskan people have lived in the Interior for thousands of years, and recognizing the name Denali brings great respect to their culture and history in our great state,” said Lieutenant Governor Byron Mallott. “I thank President Obama and Secretary Jewell for taking up this issue, which Alaskans care so deeply about.”

The move did not sit well with Ohio lawmakers.

Gibbs called the move a political stunt insulting to all Ohioans.

“President Obama has decided to ignore an act of Congress in unilaterally renaming Mt. McKinley in order to promote his job-killing war on energy,” he posted.