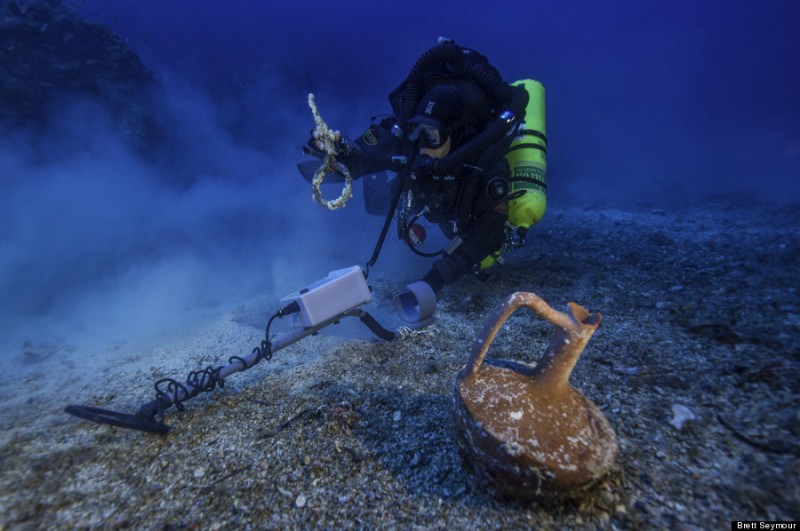 After 2,000 years, divers are finally able to unravel the secrets of an ancient Greek wreck at the bottom of the Aegean Sea.

After more than 100 years of speculation, archaeologists are finally unraveling the mysteries of an ancient Greek shipwreck in the Aegean Sea. Located off the coast of Antikythera, this luxury cargo ship has sat almost completely undisturbed for more than 2,000 years.

Estimated to have sunk between 70-60 B.C., the vessel itself is still relatively well intact and spans 50 meters in length. And with debris scattered for more than 300 meters on the seafloor around it, archaeologists are elated.

“The evidence shows this is the largest ancient shipwreck ever discovered,” archaeologist Brendan Foley said in a news release last week. “It’s the Titanic of the ancient world.” Foley is just one of the archaeologists from the Woods Hole Oceanographic Institution working on the project.

But his team was not the first to discover the wreck. Sponge divers first stumbled upon the ship in the 1900s, but because of the limitations of technology, were not able to explore it further. In fact, since the ship sits more than 55 meters under the water’s surface, retrieving artifacts has been extremely difficult.

That is, until the Hellenic Ephorate of Underwater Antiquities and Nuytco Research Ltd. were able to perfect the design of a new state-of-the-art robotic diving suit called an Exosuit. Designed to be the next wave of scuba equipment, the suit allows its wearer to withstand high underwater pressure, and remain underwater for long periods of time. The excavation of the ancient shipwreck is the first time the suit has been used.

Accompanied by high-resolution, 3D-stereo cameras, divers were able to map out and photograph some of the findings, including tableware, ship components, and even a giant bronze spear that belonged to a life-sized statue. Archaeologists plan to return again in a year to further explore the area.

Theotokis Theodoulou of the Hellenic Ephorate of Underwater Antiquities told the press he was very excited about their progress, however, “We [still] have a lot of work to do at this site to uncover its secrets.”