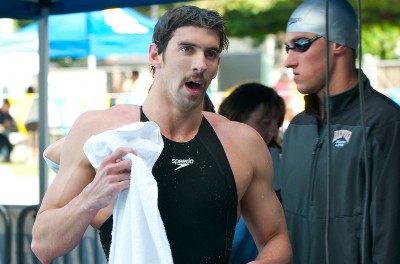 Olympic swimmer Michael Phelps was arrested on a DUI charge in Maryland earlier today, making this his second DUI—the first was also in Maryland, in 2004. The 29-year-old has 22 medals under his belt, making him the most decorated Olympian in history.

When he was pulled over by police, Phelps was driving 84 MPH in a 45 MPH zone at around 1:40 a.m. in Baltimore, Maryland. The Maryland Transportation Authority released a statement regarding the arrest:

“A white 2014 Land Rover entered the radar’s area of influence at excessive speed. The officer followed the vehicle northbound on I-95 through the tunnel and initiated an enforcement stop. Mr. Phelps was identified as the driver by his driver’s license and appeared to be under the influence. He was unable to perform satisfactorily a series of standard field sobriety tests. Mr. Phelps was cooperative throughout the process.”

He was 19 during his first DUI charge in 2004, and struck a deal that gave him 18 month of probation following the arrest. During an interview with Matt Lauer on Today in 2004, Phelps said, “I let myself down and my family down […] I think I let a lot of people in the country down.”