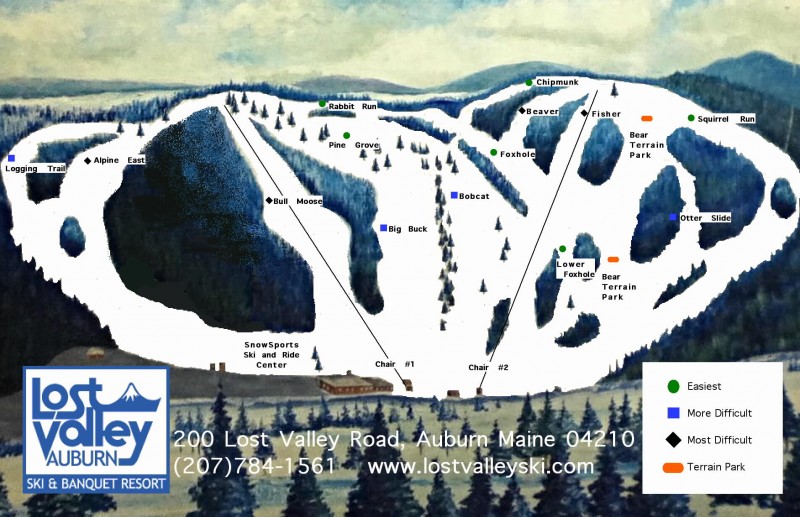 Friends of a small ski area in the Northeast have taken to crowdfunding in hopes of raising enough money to open it this winter.

The financially-plagued Lost Valley Ski & Banquet Resort in Auburn, Maine needs an infusion of cash to spin the lifts.

Friends of Lost Valley, a nonprofit organization, is spearheading a Crowdrise campaign called Save Lost Valley! to resuscitate the family-oriented area that has served the communities of Lewiston and Auburn since 1961.

The plan has two goals. One is to raise a minimum of $50,000, allowing the resort to partially open with its beloved colored chair lift. If $100,000 is raised, there will be a full opening with both the colored and silver chairs running to serve the 15-trail hill that helped launch the career of three-time Olympian and 1993 World Championship slalom silver medal winner Julie Parisien.

The small ski area is known as a feeder hill, a place that introduces new skiers and snowboarders to the sports before they venture to bigger areas.

Owners Connie King and Lincoln Hayes are strapped for operational expenses after losing hundreds of thousands of dollars over many seasons.

On the Crowdwise page, organizers say “the resort has declined in repair and appearance over the years, and machinery, equipment, and infrastructure has become outdated and inefficient. The 2008 recession also hit the small resort hard and years of operating in the red has the nail and hammer poised over the coffin of this cherished family institution.”

Karen Bolduc, a spokeswoman for Friends of Lost Valley, told the Lewiston Sun Journal members know the resort has several long-term needs for changes and improvements.

“We know there are problems,” Bolduc said. “But while we chug away at finding more long-term solutions to get Lost Valley on a sustainable trajectory, in the short term, the resort needs cash now just to stay in the game. That’s why we’ve organized this campaign—to rally immediate community support.”

The endearing ski area is steeped in history as its founder Otto Wallingford “fired up Maine’s first snowmaking system, one built from his own design” in January of 1962, according to the Ski Museum of Maine.

The late owner is also credited as the creator of modern grooming with a device he called the “Powdermaker.”

According to the museum, he finally came up with the idea of a giant roller of spandex steel (filled with openings similar to a chain link fence, only much stronger and sharper metal) and hauled it up the slopes. At first it didn’t do much, but then the inventor came up with the idea of dragging it at an oblique angle and the “Powdermaker” was born. The need for such a device was proved when he built 25 that year on speculation and all 25 were sold by Christmas to eager ski area operators.

The museum says the invention of the Powdermaker led to the formation of Valley Engineering in 1969, and soon his grooming equipment was patented and being sold to ski areas around the world. The U-blade used to bulldoze moguls into a flat surface to be tilled into powder was developed by Wallingford, as were the hydraulic systems that power the many tools used by today’s groomers.

The campaign set October 17 as the deadline for raising money. If the goal isn’t met, the collected money will be donated to the “Auburn Ski Association, Central Maine Adaptive Sports, and other local 501(c)(3) not for profit organizations that support skiing” in the communities serviced by Lost Valley.