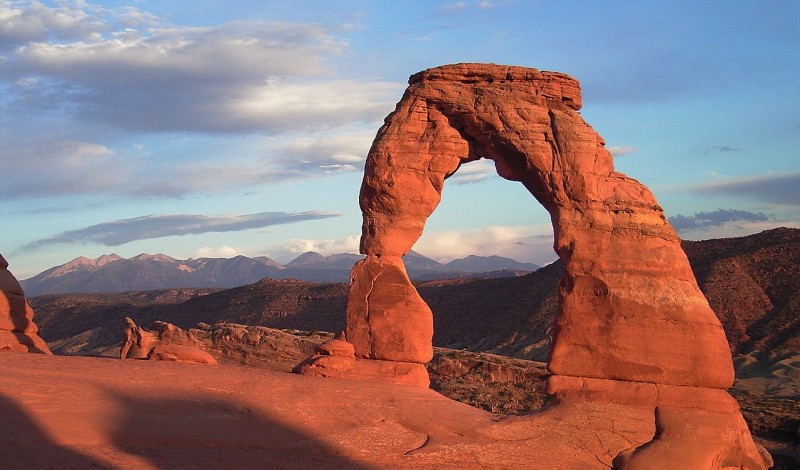 Delicate Arch with La Sal Mountains in the background.

A two-year ban has been proposed by federal officials on rope swinging on arches in Utah because of a number of deaths and injuries that have occurred. Along with the safety risks, the Bureau of Land Management named noise complaints and rock wear as additional reasons why the activity should not be carried out on the arches.

The BLM specifically named Corona Arch and Gemini Bridges, both near Moab, as sources of disturbance to those in the park who are hiking or looking for some peace and quiet—those using rope swings often scream while flying through the air, and a number of park visitors have complained.

The number of thrill seekers who decided to rope swing from the arches increased in recent years, namely after a video was released (see below) from Devin Graham, AKA Devin Super Tramp, an action sports filmmaker who became popular through his YouTube channel.

“We have seen the popularity of some roped activities skyrocket in recent years,” BLM Utah spokeswoman Megan Crandall told The Associated Press. But with the popularity came accidents.

Kyle Stocking, 22, died at Corona Arch last year after his rope had too much slack. Adam Webster, 32, died last year at Day Canyon, which is located a few miles west of Moab. In May, a 25-year-old man also had too much slack in his rope, which caused him to fall and sustain head injuries.

If the ban is approved, it would also affect other rope activities such as highlining, ziplining, or rappelling. It would affect about 32 acres around Corona Arch, and about 10 acres around Gemini Bridges, according to The Associated Press. The BLM has opened the conversation and is accepting comments from the public through September 25. It is unknown when the ban would go into effect if it’s approved.

“You can’t legislate people from not having fun,” Mike Stocking, father of Kyle Stocking, told The New York Times. “They’re going to go find it one way or another.”