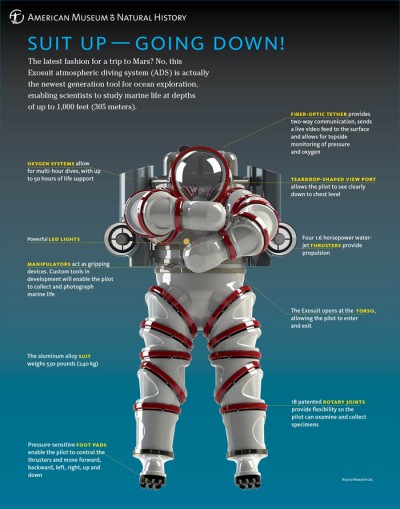 The creation of a $1.3 million, 530-pound Exosuit may allow people to start exploring the vast amount of underwater environments that still sit untouched. The suit, developed by Canadian firm Nuytco Research, was tested at Woods Hole Oceanographic Institute in Massachusetts earlier this month in addition to other test events. The true test, however, will happen when the Stephen J. Barlow Bluewater Expedition sets out to explore The Canyons later this month—an underwater region that features a drop from the continental shelf into great depths off the coast of New England.

The suit is supposed to allow pilots the ability to travel to depths of 1,000 feet and remain there for up to 50 hours. The expedition is being led Michael Lombardi, who serves as the project coordinator as well as a dive safety officer at the New York City American Museum of Natural History. The suit was on display at the museum this past February. “The Exosuit allows the human form to be embedded in the environment in a special way,” said Lombardi, according to Scientific American.

“In a normal submersible, you’re kind of just sitting inside a sphere, and you can’t really reach out into the environment other than being some kind of robotic arm or something,” John Sparks, curator in the museum’s department of ichthyology, told The Guardian. “This is much more tactile and much more maneuverable than that would be.”

According to The Guardian, the goal of the expedition is to record luminescent flashing patterns from mid-depth organisms in order to identify bioluminescent molecules that could be applied to the medical field.