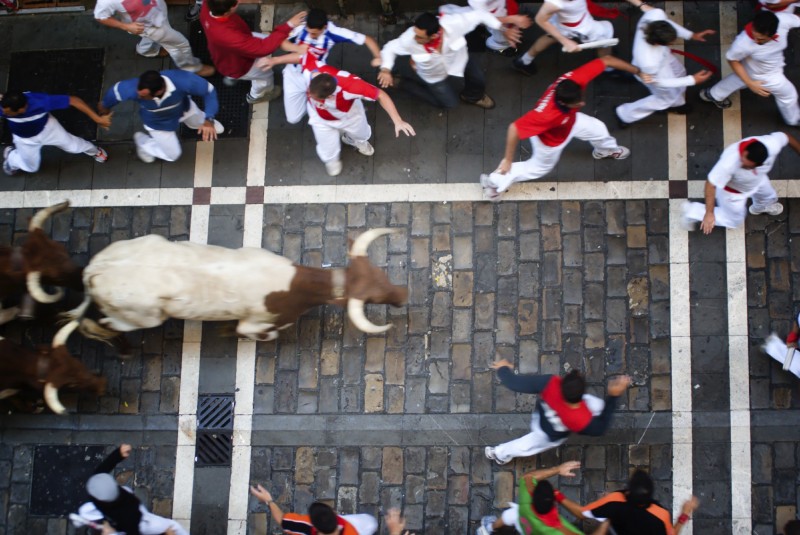 The Running of the Bulls is part of the San Fermin festival, held from July 6-14.

The Running of the Bulls has long been a tradition in Pamplona, Spain. Each year from July 6-14, the city swells as millions come to participate in the eight-day San Fermín festival. The festival, which originally consisted of religious ceremonies honoring Saint Fermin, has grown to include parades, bullfights, fireworks, dancing, and copious amounts of wine.

The two-minute run with the bulls, which occurs every morning at 8 a.m., is still the premier attraction. But barreling through a narrow, 930-yard alley with a dozen wild bulls, not to mention thousands of other participants, is not without its dangers.

This year, during the very first running, Pamplona officials were already confronted with scores of injured runners, including one 52-year-old man who was gored in the thigh. Four others were taken to the hospital to be treated for serious injuries, but according to Red Cross spokesman Jose Aldaba, none are currently in critical condition.

Since its inception in 1910, Pamplona’s famous event has seen 15 casualties, the most recent occurring in 2009 when a 27-year-old Spaniard was gored in the neck, heart, and lungs. Each year, however, between 200 and 300 people are injured, with a record 50 participants needing hospitalization during the 2013 edition.

As injuries and goring incidents increased over the last few years, so has speculation as to whether or not local authorities are taking the proper precautions to ensure safety. Head of the Pamplona City Council, Fermin Alonso, said this injury increase is caused by inexperienced participants. “There are people who enter the bull run who don’t really know what a bull run is,” Alonso told the AFP. “To correct these situations we have established some norms and fines […] Pamplona police have to remove from the course drunk people, people who wear sandals instead of running shoes.” This year, the police issued one such fine to a participant who crossed the orange waiting line before the race began.

To add to the controversy, more than 150 animal rights activists have been camped out in the city square, covered in fake blood and holding signs that read “You Run. Bulls Die.”

PETA‘s Kirsty Henderson, coordinator of this year’s protests, explained how the people who participate are not the only ones at risk during San Fermín’s events. “Many of the tourists who come to Pamplona to run with the bulls have no idea that they are participating in a festival that celebrates the torture and death of these magnificent animals, and if they did, most would undoubtedly run the other way,” Henderson told The Olive Press. Furthermore, according to PETA, recent polls suggest the famous events may be on the decline.

According to The Associated Press, the bulls that take part in each morning’s festivities are later killed by matadors in evening bull fights, and their meat is served up in Pamplona’s restaurants.